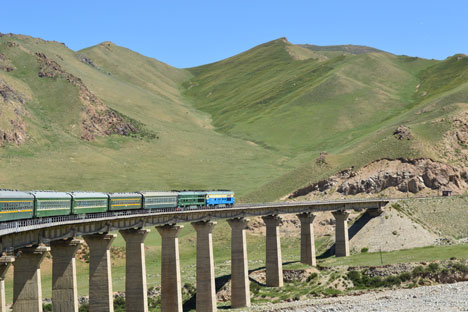 China is looking to integrate trade between South and Central Asia. Source: Shutterstock

With Russia’s participation in the proposed Silk Road network, the initiative will be more comprehensive and can help allay Indian fears of Chinese domination of the project.

The Chinese government has recently invited India to participate in its initiative to link old network of routes in the greater Eurasian region with a new set of routes. Russia had already been invited to be a part of this initiative, which the state apparatus of China is vigorously pursuing.

A few weeks back a group of journalists including from Russia started exploring the Silk Road in China’s northwestern province Gansu, one of the centres of trade in the past. India has not yet articulated its position whether to go with the Chinese initiative. On one side of the spectrum there is optimism that the initiative will bring economic development to the region and on the other side it is perceived a threat to interests of weaker countries participating in the initiative.

The initiative has three components: linking India, Bangladesh, Myanmar and China; linking China’s western part through the Karakoram Range to Pakistan’s port with possible extension to further West; and linking China’s eastern part to countries through a sea route. These routes are to be connected to the old network of routes called the Silk Road. The benefits will be mainly three-fold. It will foster regional economic integration. It will help develop infrastructure for the flow of energy. It will also help develop coordination among participating countries to fight religious extremism and terrorism. Other benefits include promotion of tourism, coordination for environmental protection

Once this initiative takes a concrete shape, it will help India to have access to Russia through the Central Asian region. It will also help move the idea of North-South corridor from Russia to India in a positive direction.

The Chinese grand initiative looks positive as it aims to connect all the countries of the Eurasian region including the regions which are not easily accessible. China’s invitation to India to be part of this grand project needs to be weighed carefully, but not necessarily in a negative spirit, by the Indian policy makers. This Chinese invitation can be juxtaposed to an early Chinese offer to India to play a larger role in the organizations such as Asia-Pacific Economic Cooperation and Shanghai Cooperation Organization.

India’s apprehension of a possible China’s encirclement is not absolutely devoid of reason. China is a close friend with India’s rival Pakistan and a major supplier of arms to it. Pakistan will also play a role in this plan for connecting regions. In India’s strategic circle there is a belief that China is developing a string of pearls to encircle India.

With addition of Russia as a participant in the project, the initiative will be more comprehensive. India and China both enjoy cordial relations with Russia. China has also expressed interest in Russia’s participation. Wang Gengnian, the Director General of China’s state-run radio station China Radio International, speaking on the occasion of the journalists’ exploration of the Silk Road, expressed hope that “this trip will help to strengthen relations between Gansu province and Russian regions.” Russia’s inclusion may moderate India’s apprehensions about China’s manoeuvre in the implementation of the project. Their participation in the initiative will enable funding for it from agencies like the newly built BRICS Development Bank. There are apprehensions about China’s policies not only in India but in other regions such as Central Asia, in which China has in recent years made significant inroads. Russia’s inclusion in the project may balance China’s policies in the region.

The Ukrainian crisis has made some of Russia’s connections to east towards Europe tenuous. Russian leadership may be interested to revive the connections in its south in Central Asia and Caucasus further towards India and China. In this direction, the old network of routes, some of which belong to the Silk Road can be useful. The connection of the old routes with the new routes with collaboration from India and Russia will be mutually beneficial. The initiative will also link Central Asian countries as an effective transit from north to south and east besides facilitating development in these countries. There are already networks such as Eastern Siberian-Pacific Ocean oil pipeline which bypasses Central Asia, but linking existing network of routes with new network of routes in the former Soviet space will open up vistas for regional economic development and integration.  India and China, and China, Russia and Central Asia share thousands of kilometres of border and this geographic linkage can be cultivated to mutual advantage.

The expansive network of routes in the greater Eurasia under the new initiative may also further coordination between regional organizations. The Russian led Eurasian Economic Union can be benefitted from this economic initiative by working in coordination with other regional organizations such as Economic Cooperation Organization, SAARC, ASEAN and BIMSTEC. These organizations can be linked to promote regional and national interests in a framework of mutual cooperation and benefit. Last month during the meeting of foreign ministers of Shanghai Cooperation Organization, Russian Foreign Minister, Sergei Lavrov and Chinese Foreign Minister, Wang Yi met separately and emphasized the importance of maintaining strategic communication and coordination in areas of mutual interest including in the areas of trade and energy. The Chinese initiative of connecting old and new networks of routes, from this perspective, can be a harbinger of economic benefits for greater Eurasia.

However, one must caution against possible dominance of a singer power in the implementation of the new idea. For the initiative to be a fair game, China needs to be clear about its objectives and expectations and convey them to other participants including India and Russia. The roles of each country need to be laid out in detail. It may be a tall order to expect India and China to resolve bilateral differences for the initiative to be a success, but they can at least assure each not to escalate the bilateral tensions and not to harm each other’s interests. Russia can also work to develop amity between the two rivals towards making the initiative a success.