The truth must be revealed - Sergei Lavrov 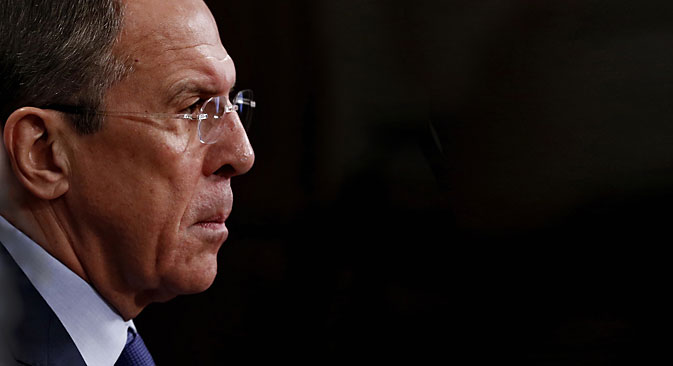 In an exclusive interview with RIR on the Ukraine crisis, Russia’s Foreign Minister says the highest priority must be an unconditional ceasefire to end the suffering of civilians.

There has been repeated speculation, particularly in the Western media, that Russian troops could be deployed in Ukraine and even that they have already crossed the border into Ukrainian territory. Is such an action possible in your view?

Unfortunately, the mass media continue to spread rumours, distorted information and even outright lies. Recently there were claims by Ukraine that its artillery destroyed an armoured column that had allegedly crossed from Russia into Ukraine, and the British media even said they witnessed the incursion. No evidence, however, was presented, and even the U.S. State Department could not confirm the incident. We view all such stories as part of an information war.

But a real war is happening on the ground. What can Russia do to resolve this crisis?

Our stand is crystal-clear – we want peace in Ukraine, which can only be attained through broad national dialogue in which all regions and all political forces of the country must participate. This is what Russia, the US, the EU and Ukraine agreed in Geneva on April 17. At the recent meeting in Berlin of the foreign ministers of Russia, Germany, France and Ukraine, no one objected to confirming the Geneva Statement. The point is for Kiev to stop war games and to abandon the illusion that the deep crisis in Ukraine can be resolved by winning the war against your own people. It is deeply saddening that the US and the EU continue blindly to support anything Kiev does.

Let’s recall another document that Kiev and the West try to forget. On February 21, an agreement on settling the crisis was signed by Viktor Yanukovych, Arseni Yatsenyuk, Vitali Klitschko and Oleg Tyagnibok and witnessed by the foreign ministers of France, Germany and Poland. They now say the agreement “has been superseded by events” because [former Ukraine president] Mr. Yanukovych left the country. But let me remind my colleagues that the February 21 agreement listed as the number-one priority the commitment to a government of national unity. Does this goal depend on the personality of Mr. Yanukovych? Isn’t national unity a universal principle for any country that wants to stay whole? Instead of honouring this commitment, the opposition leaders staged an armed coup and publicly declared they had created a “government of the winners”. Unfortunately, the logic of “winner takes all” remains the thrust of Kiev’s actions, resulting in thousands of victims among civilians, hundreds of thousands of refugees and displaced persons, as well as an almost totally destroyed social infrastructure in many cities and towns in eastern Ukraine.

There has been much talk of a new Cold War in relations between the West and Russia, with the United States and the European Union having imposed economic sanctions. If they pursue a further hardening of sanctions, how can Russia respond?

Attempts to settle crises by unilateral sanctions outside the framework of UN Security Council decisions threaten international peace and stability. Such attempts are counter-productive and contradict the norms and principles of international law. It is absolutely unacceptable to talk to Russia – or anyone for that matter - in the language of ultimatums and coercive measures. Our response to unilateral steps by the United States, EU and some other countries has been balanced and in line with the rights and obligations of Russia under international treaties, including the World Trade Organisation.

But sanctions continue to be threatened and implemented. Will Russia respond to new measures against it?

It is not at all our choice, but there should be no doubt that we will do whatever is necessary to protect our legitimate interests, including the interests of national security in all its dimensions.

That was the basis of our decision to restrict, for the duration of one year, the import of agricultural and food products from several states that had adopted sectoral economic sanctions against Russia. But Russia does not want to proceed along the road of escalation. We hope that the US, the European Union and others heed the voice of reason and put an end to this meaningless tit-for-tat vicious circle which they started.

How does Russia view the investigation into the crash of flight MH17 in eastern Ukraine?

The downing of the Malaysian plane is a shocking tragedy. Since it happened on July 17, we have been calling for an open and objective international investigation. It is impossible to explain why the Ukrainian authorities, who bear full responsibility for the safety of international flights over the territory of their country, had not closed the airspace over the area of combat. Resolution 2166 adopted by the UN Security Council on July 21 provides for a full, thorough and independent investigation into the incident in accordance with international civil aviation guidelines.

Unfortunately, from the very beginning we have been witnessing attempts to conceal evidence and to hinder the implementation of that resolution. The demand for a ceasefire in the area of the crash was ignored by the Ukrainian authorities for more than 10 days, and our proposal to call for full respect of Resolution 2166 was blocked in the Security Council by the US, UK and Lithuania. At the same time, those very countries and some others started spreading unfounded accusations against Russia. Let me reiterate that Russia is fully committed to the international investigation in full compliance with Resolution 2166. We would like to see the International Civil Aviation Organisation (ICAO) take a more active role in the matter, and we believe that the UN and ICAO should co-ordinate international efforts to ensure early and convincing results of the investigation. Russia is the only country which officially presented to the international community the data relating to the incident as received through our space-monitoring capacity. Others are still to provide the evidence they possess.

Do you think all of the evidence related to the crash will be made available so that investigators can establish exactly what happened?

We formally put forward a number of questions on our part that remain unanswered. For example, where are the transcripts of exchange between the pilots of MH17 and the Ukrainian air controllers and why were they not presented to the international community? Why did the controllers instruct the flight to enter the conflict zone? What was a Ukrainian air force plane doing in the near-vicinity of the Malaysian Boeing right before the incident? What is happening to the wreckage at the crash site and why has it not been thoroughly examined by the appropriate international investigating authorities? To what extent can an objective and independent investigation be assured without safe and unimpeded access of experts to the crash site, where Kiev continues its war activity in violation of Resolution 2166?

And where is the documented evidence of claims by the U.S. officials regarding the causes of the downing of the aircraft? We hope to get answers to these and other questions both from the states that took the leading role in the international investigation and from those who made unsubstantiated public statements. The truth must be revealed. That was our strong demand at the recent meeting of the UN Security Council, while some member states showed little enthusiasm in pursuing the investigation in a transparent and accountable manner. We must not allow the investigation of the MH17 crash to be manipulated into oblivion, which has happened to investigations into many Ukrainian tragedies, including the sniper assault on civilians in Kiev in February, massacres in Odessa and Marioupol in May and others. We are determined to insist on bringing to justice all those who bear responsibility for these crimes.

The cost in human life of this conflict has already been high and tens of thousands of  people have been displaced because of the fighting. How do you view the humanitarian situation in Ukraine?

The humanitarian situation in the Lugansk and Donetsk regions of Ukraine is catastrophic and continues to deteriorate. And it is not only our view. This assessment is widely shared in the United Nations, including the UN Office for the Co-ordination of Humanitarian Affairs, in the International Committee of the Red Cross (ICRC) and in the Council of Europe. More than 2,000 people have been killed and more than 5,000 wounded, many of them children. There is an acute shortage of food and medicine and growing risk of outbreaks of infectious diseases.

More than 200,000 people in Lugansk are deprived of electricity, drinking water and means of communication. A lot of people have fled the area of conflict. Since April 1, nearly 775,000 Ukrainian citizens entered the Russian territory, and 190,000 Ukrainians applied for a refugee status in Russia. Temporary shelters have been put up in our country to accommodate tens of thousands of refugees.Under these circumstances it is crucial to ensure the immediate supply of humanitarian aid to the people of south-eastern Ukraine. Humanitarian issues must bring together all people who act in good faith trying to alleviate the suffering of people in dire need – especially women, children and the elderly.

But Russia has been sending aid. What happened with the humanitarian convoy?

Russia, in co-operation with the ICRC, sent a humanitarian convoy of around 300 trucks carrying 2,000 tons of medical supplies, food, sleeping bags, power generators and other basic commodities. The convoy was ready to move as early as August 17, but was delayed primarily due to procrastination tactics employed by the Kiev authorities, though they had recognised the cargo as humanitarian aid under the auspices of the ICRC, and sent Ukrainian border guards and customs officers to monitor all procedures at the Russian checkpoint near Donetsk. We urge the Ukrainian government to deliver on its promises and to facilitate the safe and unhindered passage of  future humanitarian assistance.