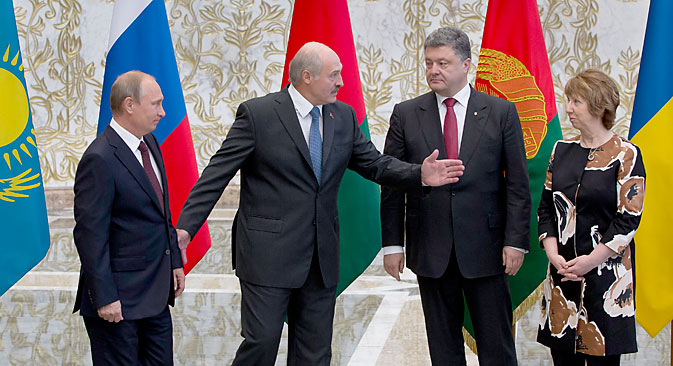 Ukrainian President Petro Poroshenko said he would work on an urgent ceasefire plan to ensure peace in the southeastern parts of the country.

Russian President Vladimir Putin received an assurance from his Ukrainian counterpart Petro Poroshenko that the Kiev authorities would work on an urgent ceasefire plan to end the country’s bitter civil war. The leaders held two-hour talks in the Belarusian capital of Minsk, after they met the heads of state of Belarus and Kazakhstan and senior representatives of the European Union for multilateral talks.

“Russia, can't substantively discuss conditions of a ceasefire, of agreements between Kiev, Donetsk and Luhansk,” Putin told reporters in Minsk after the talks. “That's not our business, it's up to Ukraine itself.” He added that Russia could only “contribute to create a situation of trust, for a possible, and in my view, extremely necessary, negotiation process.”

Poroshenko told reporters that the talks were tough. “A roadmap will be prepared in order to achieve as soon as possible a ceasefire regime which absolutely must be bilateral in character, Reuters News cited the Ukrainian president as saying.

The talks hosted in Minsk, by Belarusian President Alexander Lukashenko, were  deemed positive by a report on RIA Novosti.

According to the report, Poroshenko suggested accepting his peace plan that should help to cease the bloodshed and rebuild the Donbas region.

“I'm convinced that this plan remains a viable and practical instrument for ceasing bloodshed and rebuilding the Donbas region after the conflict. In this regard, I call on all participants of today’s meeting to consider the possibility of making this plan a basis for the Donbas crisis settlement,” Poroshenko said.

Despite differences in attitude to the crisis in Ukraine, all participants of the Customs Union-Ukraine-EU meeting agreed on non-violent manner of the crisis de-escalation and said the captives should be released.

“Everybody agrees that de-escalation is needed and hostages should be released,” Belarusian President Alexander Lukashenko was cited by RIA Novosti as saying.

The U.S. and its allies have accused Russia of supporting the rebels in southeastern Ukraine, a charge that Moscow denies. The fighting between the rebels and the Kiev authorities has claimed more than 2,200 lives, with both sides exchanging allegations. The conflict, which has led to tit for tat sanctions between the West and Russia, has been called the worst geopolitical crisis since the Cold War.

Materials from RIA Novosti were used in this report.