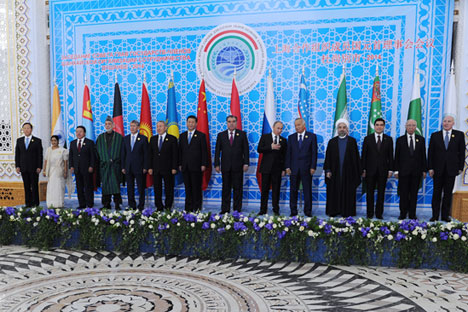 According to the experts, Russia and India can play an effective role in outlining plans for projects in energy, transport, agriculture and environmental protection, which could be incorporated in the “Strategy for the SCO’s Development up to 2025.”

Expecting to be admitted into the Shanghai Cooperation Organization (SCO), as a full member next year, India plans to coordinate multidimensional programmes with the grouping in security, energy, trade and economy.

India is already an observer member of the SCO since 2005, together with Afghanistan, Pakistan, Iran and Mongolia and has  repeatedly expressed its desire and readiness to play a more active, constructive and broader role in the six-nation organization, including Russia, China and four Central Asian countries of Kazakhstan, Kyrgyzstan, Tajikistan and Uzbekistan.

The SCO’s Council of Heads of State (CHS) summit in Dushanbe, Tajikistan on September 11-12 formalized the final draft of the legal, administrative and financial requirements for admitting new members, which earlier had been finalized at the Foreign Ministers meeting.

Addressing the summit, President Vladimir Putin said that expansion of the SCO will start next year during Russia’s presidency. “Taking the rotating presidency rights, we hope the SCO expansion process next year will take shape. We will assist this process in every possible way,” Putin noted.

India and Pakistan expected to become full members of SCO

In her speech, at the summit, Swaraj reiterated India’s determination to closely interact with the grouping’s member-states, especially in the fields of IT, business and economic cooperation and combating terrorism.

Putin said in his speech at the summit that up to 100 various events are on cards during Russia’s presidency of the SCO before the CHS summit in Ufa, Russia on July 9-10. He added that under the Russian presidency, the reinforcing of the regional security mechanism, the launch of major bilateral economic projects, deepening of humanitarian and cultural relations will be in the focus.

Thus now India has vast opportunities to participate and collaborate with Russia in these plans and events on a bilateral basis within the framework of the SCO. The cooperation between the two countries will certainly reflect in the “Strategy for the SCO’s Development up to 2025” which is expected to be finalized before Ufa summit. The SCO leaders at the summit signed an agreement on the draft strategy up to 2025.

“We wish to bring to the table our technical expertise, markets and financial commitment, all of which equip us to fulfill greater responsibilities in this forum,” Swaraj said. “We would specifically like to share our experience in economic areas like banking, capital markets and micro-finance,” she stressed.

Swaraj also met with Russian Foreign Minister Sergei Lavrov on the sidelines of the summit. During their talks the sides discussed the current issues in Indo-Russian relations and urgent regional and international problems, including Ukraine, Iraq and Afghanistan and exchanged opinions on expanding the bilateral cooperation within the SCO.

According to the experts, Russia and India can play an effective role in outlining plans for projects in energy, transport, agriculture and environmental protection, which could be incorporated in the “Strategy for the SCO’s Development up to 2025.”

In the field of regional security, India as a close neighbour of Afghanistan, is seriously concerned, especially in view of the withdrawal of US-led international troops by the end of 2014.

Russia has already proposed to hold a conference on Afghanistan within the framework of the SCO to plan a concerted action of the grouping to meet the threats to the member-countries. Undoubtedly, the effectiveness of the SCO to overcome these threats from terrorism, extremism, separatism and drug-trafficking in the aftermath of US withdrawal from Afghanistan will, to a great extent, depend on the deeper cooperation between the two countries.

“In this context, we are keen to deepen our security-related cooperation with the SCO in general and with the Regional Anti-Terrorism Structure, in particular,” Swaraj said in his speech. She had arrived in Dushanbe the day after holding talks with Afghan President Hamid Karzai in Kabul during which the sides agreed to boost security and defence ties between the two countries, in view of the withdrawal of US-led coalition forces before the end of the year.

The role and importance of India as a full member and the cooperation between Russia and India as strategic partners can, beyond doubt, ensure the security in the region, Swaraj stressed.