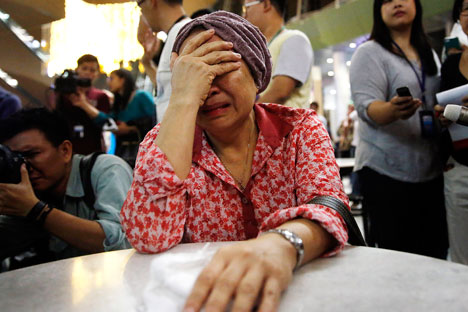 A woman cries at Kuala Lumpur International Airport as she waits for more information about the crashed plane, on July 18. Source: Reuters

Three months after the Malaysian airliner was shot down, many in Kuala Lumpur feel the truth will permanently be a victim of geopolitics.

Three months after a Malaysia Airlines flight from Schipol to Kuala Lumpur was shot down, many shops in the glitzy KLCC Suria Mall still display signs offering condolences to families of the victims. Similar signs are visible in many shopping areas across the Malaysian metropolis. After Holland, which lost 193 of its citizens, Malaysia lost the largest number of people, counting 43 among the deceased.

Among the victims was Malaysian-Dutch couple, actress Shuba Jay, her Dutch husband Paul Goes, and their daughter. “We are not sure whether it was the rebels or the Ukrainian government who did it, but we just want justice for these innocent people,” says an emotional Laxmi Mudaliar, an advertising professional, who was a fan of the actress. “The Americans said they had evidence of the rebels doing it, but where is it,” she questioned.

A senior Malaysia Airlines crewmember who flew regularly on the Amsterdam route said the staff have been asked to be tight-lipped on the incident. “I lost 2 colleagues who I worked with for years,” she said, adding that it was a standard procedure for countries to close off their air space in conflict zones. “I don’t know who did this, but then why didn’t Ukraine just seal off the area for flights since they weren’t in control there?” This view has been widely echoed in blogs in the country.

Malaysia Airlines officials refused to come on record when questioned about their opinion on who was responsible. “Just look at the archives of the New Straits Times, if you want to know what the popular perception here is,” an official with the struggling airliner said.  The media is tightly controlled in this country and a report that was mentioned by the official pointed the blame squarely at the Ukrainian government.

The newspaper report cited Associated Press reporter Robert Parry as saying, “some US intelligence sources had concluded that the rebels and Russia were likely not at fault and that it appears Ukrainian government forces were to blame.” The Kuala Lumpur paper had earlier cited experts as saying  “that the photographs of the blast fragmentation patterns on the fuselage of the airliner showed two distinct shapes — the shredding pattern associated with a warhead packed with “flechettes” and the more uniform, round-type penetration holes consistent with that of cannon rounds.” The Ukrainian Embassy in Kuala Lumpur denied the allegations that their government was involved in the attack.

Malaysia also enjoys good diplomatic relations with Russia and this is one of the main reasons, why the country did not join the chorus of countries blaming the rebels in Eastern Ukraine and through them Russia. “We are very appreciative of the very balanced and wise position taken by the Malaysian government led by Prime Minister of Malaysia Najib Razak,” Russia’s Ambassador to Malaysia Lyudmila Vorobyeva told Xinhua in an interview in July. “They are not engaging in this blame game, they are not pointing fingers or accusing anyone before the results of the investigation are known.”

Security analysts say the article in the New Straits Times holds water with many in the Malaysian establishment, but by blaming a Ukrainian government that is backed by Washington, there is a certain risk of a backlash. “The government is holding out from saying anything until the results of the Dutch probe are out in 2015, but there is pressure from the Malaysian public to get answers,” a Malaysian security official said.

A large number of countries in Southeast Asia are trying to balance out China’s growing clout in the region with greater ties with the US.  This week, Malaysian state-run news agency Bernama quoted a senior minister as saying, “China understands Malaysia's need to forge bilateral and economic cooperation with the US and similar to what has been achieved with it.”

The Malaysian security official added that the extra pressure comes since there is virtually no explanation as to what happened to MH 370, which disappeared en route from Kuala Lumpur to Beijing in March. “Again, there China lost the largest number of citizens, but we still see it as our tragedy,” the official said.

Ukraine, the Netherlands, Australia and Belgium signed a non-disclosure agreement pertaining to the data that is obtained while investigating the MH 17 crash. Malaysia was not part of such an agreement, yet it is unlikely that the country is going to put any further pressure than it already has for an impartial investigation. “There is a lot riding on the final report and you can be sure that someone will be unhappy when they come to a conclusion,” the security official said. “The truth behind the incident could easily become a victim of geopolitics.”  His view is shared by many on the streets of Kuala Lumpur.