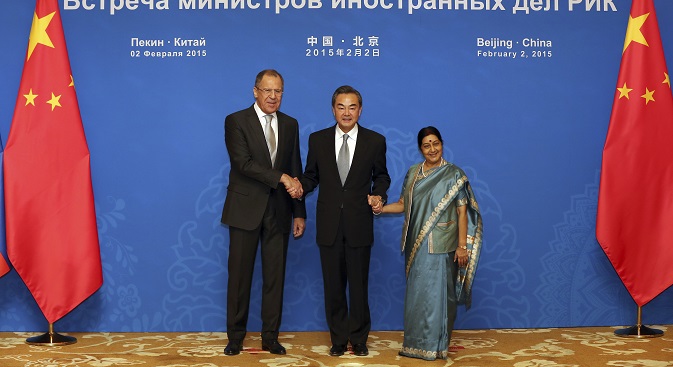 Sergey Lavrov (l), Wang Yi (c) and Sushma Swaraj shake hands together as they pose for photographers before the meeting of the Foreign Ministers of the China, Russia and India in Beijing on February 2, 2015. Source: AP

Russia, India and China call for creating a new type of international relations based on the principles of the UN Charter and developing a multipolar world.

"Developing countries are an important driving force of the world economy," he said.

"We call for improving the system of the global economy’s governance, enhancing the voting power of developing countries’ representatives and implementing the 2010 decisions on the IMF’s reform as quickly as possible," the Chinese foreign minister said.

The leaders of the G20 Group agreed in Seoul in 2010 on reviewing the IMF’s quotas in favor of emerging market and developing countries to better reflect ongoing changes in the world.

IMF Governors earlier said they were discontent over the US Congress’s delay in ratifying the Fund’s 14th quota review in favor of emerging market and developing counties.

The Chinese foreign minister also said Russia, India and China stood for creating a new type of international relations based on the principles of the UN Charter and developing a multipolar world, he said.

"In the current situation, the international community should safeguard the goals and principles of the UN Charter, respect the right of the peoples of all countries in the world to the choice of the way of their development," he said.

The international community should also seek to create a new type of international relations in the spirit of cooperation and mutually advantageous cooperation in the interests of "their democratization and the development of a polycentric world," the Chinese foreign minister said.

Russia cannot be a mere spectator to India-China disputes

"Our countries have reached agreements on cooperation in five areas, including the establishment of think tanks and efforts to intensify interaction between business circles, as well as cooperation in agriculture, the elimination of consequences of natural disasters and health care," the Chinese foreign minister said.

Russia, India and China are also "looking for possibilities to tap potential in such spheres as the energy sector, high technologies and environmental protection," he said.

Russian Foreign Minister Sergey Lavrov said earlier the positions of Russia, India and China were close to each other or coincided on the situation in the world and further cooperation.