Anna Sorokina
based on Interfax 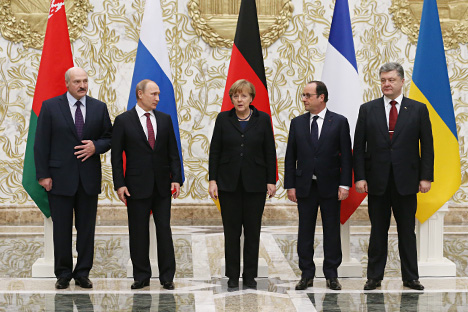 The meeting of the French, German, Russian and Ukrainian leaders in the Belarusian capital Minsk. Source: Kontantin Zavrazhin / RG

The Trilateral Contact Group for Ukraine has agreed on a comprehensive ceasefire in the Donetsk and Lugansk regions starting 00:00 a.m. Kiev time on Feb. 15, in line with the document outlining measures to enforce the Minsk agreements.

After a 16-hour-long negotiation in Minsk, the capital of Belarus, the leaders of France, Germany, Russia and Ukraine reached an agreement to bring peace to the Donbass region of eastern Ukraine.

The parties to the conflict have agreed to begin a ceasefire at 00:00 on February 15, Russian President Vladimir Putin told reporters after the meetings ended.

The Minsk Agreements, which were signed in the Belarusian capital on Sept. 5 and 9, 2014, included terms for a ceasefire, the withdrawal of heavy arms, Kiev's approval of a special status for the Donetsk and Lugansk Regions, amnesty for the militias, as well as the creation of a monitoring group that would observe the cessation of military activities. The agreements were never fully implemented.

"The second position, which I view as very important, is the withdrawal of heavy weapons from the contact line existing today by the Ukrainian forces and from the line set in the Minsk agreements of Sept. 19, 2014 by the Donbass militia," Putin said. "We are expecting all sides [to the conflict] to exercise restraint in the forthcoming period until the complete ceasefire is attained.”

The enforcement of the Minsk agreements reached on Thursday envisions a constitutional reform in Ukraine, which must take into account the legitimate rights of the Donbas residents, Russian President said: "There is a set of measures related to the further political settlement, and it includes several positions. First, this is a constitutional reform, which must take into consideration legitimate rights of the people living on the Donbass territory."

Ukrainian President Petro Poroshenko said that the meeting was quite tense.

"It was not easy. In fact, different unacceptable conditions, including retreat and surrender, were put forth to us. But we did not bow to any ultimatums and firmly stood by our position that a ceasefire should not have any preliminary conditions, " Poroshenko told reporters.

Self-proclaimed Donetsk People's Republic leader Alexander Zakharchenko has put the entire responsibility for a possible breach of the agreements on Kiev.

“The whole responsibility for any possible violation of the provisions of this memorandum will rest upon Petro Poroshenko," Zakharchenko told reporters.

1. The withdrawal of heavy armaments from the line of contact between the warring sides in southeastern Ukraine is due to begin no later than the second day of the ceasefire and must be completed within 14 days.

The requirement is set in a package of measures towards the implementation of the Minsk agreements signed at the Contact Group on Thursday.

The document said that the OSCE supported by the Trilateral Contact Group would be fostering that process.

2. A package of measures towards the implementation of the Minsk agreements envisages the launch of a dialogue on the modalities of local elections in the Donetsk and Lugansk regions

The document compels the sides to begin dialogue on the modalities of local elections consistent with the Ukrainian legislation and the Ukrainian Law "On the Temporary Procedure of Local Self-Government in Certain Districts of the Donetsk and Luhansk Regions" and the future regime for these districts based on the aforementioned law on the first day after the withdrawal of heavy weapons.

3. The document stipulates that all hostages and other unlawfully held individuals must be released and exchanged on the all-for-all principle, and the process must be completed on the fifth day at the latest after the withdrawal of heavy weapons.

4. The document says that the restoration of control over the border will start on the first day after local elections and end upon the achievement of comprehensive political settlement by late 2015.

6. The leaders will remain committed to the implementation of the Minsk agreements; to this end, they have agreed on setting up a control mechanism in the Normandy format, which would hold regular meetings, as a rule, at the level of senior officials representing their foreign ministries.