Will the ceasefire in eastern Ukraine work this time? 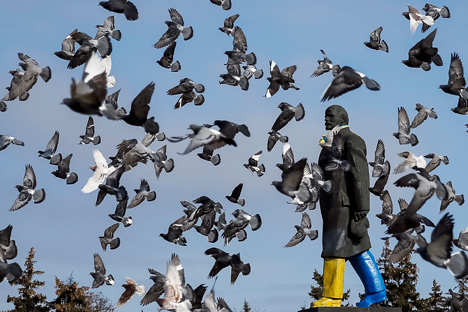 Pigeons fly around a monument of the Soviet state founder Vladimir Lenin painted in the colors of the Ukrainian national flag is seen in Kramatorsk, eastern Ukraine February 11, 2015. Source: Reuters

According to the agreement reached in Minsk on Feb. 12, the ceasefire in eastern Ukraine goes into effect at 00:00 on Feb. 15. However, Russian military experts believe that several factors may impede the full cease of military activity, key among which is the situation in Debaltsevo.

Presenting the results of the all-night talks in Minsk on Feb. 12, which include the withdrawal of heavy armament and the creation of a security zone between the conflicting sides, Russian President Vladimir Putin announced that, "the leaders were able to agree on the most important thing" - the ceasefire.

Putin also said that there are difficulties present in the agreement, indicating the different interpretations that Russia and Ukraine have of the situation in the vital railway hub of Debaltsevo, where, according to the rebels, several thousand Ukrainian troops are encircled.

Putin remarked that any attempts by the Ukrainian troops to break out of the circle may seriously complicate the situation in eastern Ukraine, which would cast doubt on the ceasefire agreement reached.

Analysts say that Kiev does not want to recognize the fact that a large military division has been surrounded, and this is leading the situation towards a dead end. Military expert Viktor Murakhovsky believes that a possible solution could be to send military specialists to the region, as Putin has already suggested.

However, Murakhovsky emphasizes that for their mission to be successful, the ceasefire must first come into effect. Otherwise the military observers will not be able to do their job. Moreover, there are still not that many encouraging signals that the warring sides will stop fighting. On Feb. 13 both the militias and the Ukrainian troops announced that their adversaries were continuing the shelling.

Experts say that Kiev's refusal to admit the encirclement of its troops is due to political and psychological factors. The situation is similar to that of the confrontation near the Donetsk airport, which did not have a decisive strategic significance but was an important symbol for Kiev's fight with the rebels. After several months of fighting, the Ukrainian forces were ultimately unable to maintain control of the airport.

Experts underline that it is necessary to withdraw the Ukrainian troops from Debaltsevo. According to Vladimir Mukhin, a military observer from the Nezavisimaya Gazeta newspaper, due to the terrain, the Ukrainian forces practically have no chances of getting out independently, while any attempts at shooting their way out would lead to enormous losses.

Moreover, observers point to another possible development in Debaltsevo, again alluding to what happened earlier around the Donetsk airport. According to Deputy Director of the Institute of Political and Military Analysis Alexander Khramchikhin, the Ukrainian forces, as they did at the airport, may remain in Debaltsevo for quite a while and then, possibly in several months, try to break out.

Agreements are fated to fail

In general, Khramchikhin believes that the present agreements will have the same unenviable fate that the previous agreements had. This is related to the fact that they were imposed by exterior powers, and that neither of the conflicting sides is interested in their implementation.

Meanwhile, in the military sense, neither Kiev nor the rebels have achieved what they wanted, and neither side has lost its capacity to fight. In light of these facts, Khramchikhin predicts that the military action that will most likely cease after Feb. 15 has the potential to flare up again this summer.

Experts say that another weakness of the agreements, from the military point of view, is related to the fact that the withdrawal of heavy armaments from the demarcation line running through the outskirts of Donetsk means that only the rebel ‘infantry’ will be protecting the city. This makes the rebels’ position in the zone very vulnerable.

As a result, the Ukrainian forces bear great responsibility for the implementation of the agreements: Without the Ukrainian army first withdrawing its armaments, the removal of its artillery will be a suicidal step for the rebels.