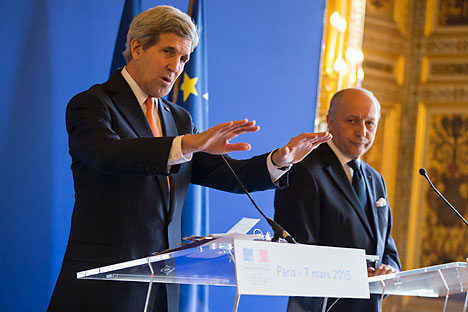 Tehran and the members of the P5+1 group may have reached an agreement on several key points.

Another round of talks on Iran's nuclear program between Iran and the P5+ 1 group (the five permanent members of the UN Security Council plus Germany) was held in Montreux, Switzerland last week. During the talks, a compromise was reached on key issues, opening up the possibility that a framework agreement might be signed by the end of March.

"We had very useful talks with the six powers, and we have made some progress, more than ever before," said Iranian Deputy Foreign Minister Abbas Araghchi after the meetings.

Igor Morozov, a member of the foreign affairs committee of the Federation Council, the upper house of Russia's parliament, who participated in the talks said: "Today, Iran has been rescued from the dead end in which it found itself due to its own national nuclear program."

Foreign policy experts agree that the talks were significant. "We have not seen such progress since November 2013, even in the last 12 years – since the emergence of the Iranian nuclear problem," said Vladimir Sazhin, a senior researcher at the Institute of Oriental Studies and a specialist in Iran.

The reason for optimism is due to the fact that the talks have progressed from general conversations to achieving some agreements in principle.

"Details and aspects of a future comprehensive agreement were being coordinated," Stanislav Pritchin, a researcher of the Institute of Oriental Studies of the Russian Academy of Sciences, told RIR."Even according to modest estimates expressed by the negotiators, the process was fairly constructive."

Vladimir Sazhin believes that the modest statements made by the negotiators underlie the strength of the agreements.

"The agreement is opposed by powerful forces both in Iran, and the United States. Not wanting to annoy this opposition, the parties have decided not to publish the results of the current negotiations," Sazhin said.

In his opinion, the parties likely reached an understanding on several key points, one of which is the time frame during which the IAEA will have oversight. "Here, we are talking about the period during which the IAEA will exercise greater control over the Iranian nuclear program – while Iran will be not allowed to develop its nuclear infrastructure. There were a lot of options – from three to 25 years. One of the latest proposals is 10 years, and, according to unconfirmed reports, the Iranians are willing to accept it," Sazhin said.

It is likely that a compromise on the heavy water reactor under construction at Arak will also be reached. According to preliminary data, the parties agreed that the design of the reactor will be amended so that it could produce no more than 1.5 kg of plutonium per year.

Several issues remain up for discussion, but experts do not consider them so significant. Discussions over the number of centrifuges used to enrich uranium is one such question. "In Iran, mostly first-generation centrifuges are used, which make the performance and efficiency of cascades not very high, and, in fact, it makes no difference how many of them Iran has – 6,500 or 9,500. So here we can agree," Sazhin said.

Another contentious issue is the mechanism for lifting the sanctions currently in place against Iran. While the U.S. Congress is controlled by Republicans, President Barack Obama is unable to guarantee the Iranians the complete removal of U.S. sanctions. The issue of any deal with Iran has become even more contentious in recent days after 47 U.S. senators sent a letter to Tehran warning that any agreement signed by Obama could be revisited after he is out of office in January 2017.

Sevak Sarukhanyan, an expert on Iran at the Noravank Foundation, said that lifting of sanctions by the U.S. is actually a minor point since economic relations between Iran and the United States have been minimal for so long. Rather, it is important that Washington agree to lift restrictions preventing Iran from trading with third countries, primarily with the EU.

"Rouhani came to power with promises to solve the most important socio-economic problems of the country, which is impossible to do without the lifting of the sanctions,” Sarukhanyan said.

The next round of talks begins on March 15. The parties hope to have a framework agreement by the end of the month and final deal in place by June.