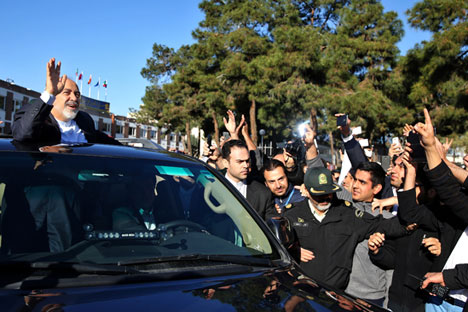 The Indian government strongly welcomed the framework nuclear agreement reached between Iran and the P5+1 nations as “the success of diplomacy and dialogue,” which respects Iran’s right to a peaceful nuclear program while ending crippling sanctions. India, which did not support US and EU sanctions on Iran, had to abide by UN sanctions, and stands to gain from the easing of those sanctions.

Iran has pulled off a diplomatic triumph reaching an historic agreement for a framework nuclear deal with the P 5+ 1 group of nations. The significant agreement, which could alter the balance of power in West Asia, was reached after 18 months of intense negotiations and many missed deadlines. It will restrict Iran’s nuclear programme to peaceful applications while easing harsh economic sanctions.

The P5+1 (five permanent UN Security Council members, USA, Russia, China, France and Britain and Germany) in Lausanne on April 2, announced the interim agreement on Iran’s nuclear programme. An actual deal has yet to be signed but is due to be ready by June 30. The ambitious framework deal would curtail Tehran’s enrichment program and open it up to inspections while Iran’s economy would be relieved of the crippling UN and U.S.-led sanctions in place since 2006.

India promptly welcomed the historic agreement saying it “underlines the success of diplomacy and dialogue, which India has always supported and which we hope would lead to a comprehensive agreement by June 30”.

“India welcomes the understanding …between Iran and the E3+3 on the nuclear issue. A significant step seems to have been taken with agreement on the parameters of a comprehensive settlement to be negotiated by June 30,” Akbaruddin said.

For India, the deal signals several benefits; both strategic and economic. India has been wary of another nuclear-armed state in the neighbourhood, after Pakistan, and openly expressed reservations about Tehran acquiring nuclear weapons, even voting against it at the UN to get its message across. This agreement appears to have averted that eventuality.

If Iran agrees to the deal and the IAEA verifies that it has fulfilled its obligations, the US and European Union will suspend sanctions. The U.N. Security Council will then pass a resolution lifting all past resolutions concerning Iran’s nuclear program, including restrictions on conventional arms and ballistic missiles, asset freezes, cargo inspections, and other provisions.

The Indian economy will gain, as prices of crude oil are likely to go down, which would ease pressure on India’s balance of payments situation. Saudi Arabia-led OPEC will likely maintain its output, leading to a glut and fall in prices.

Additionally, the breakthrough in the nuclear standoff between Iran and the West will help major buyers of Iranian oil, like India, by lifting curbs on quantity of import and payment restrictions. China, India, South Korea, Japan and Turkey are the largest buyers of Iranian crude. Iran has the world's fourth-largest oil reserves.

The US and EU blocked all financial channels to choke Iran by pressurising countries like India to not only curtail their oil purchase from the Persian Gulf nation, but also to block avenues for payment. India cut its imports from over 18 million tonnes in 2009- 2010 to 11 million tonnes in 2013-14. Not only were reduced supplies a problem, but arranging payments for the supplies became a major problem. India almost stopped importing Iranian crude, though Iran has been one of its biggest suppliers.

However, Israel and Saudi Arabia are far from happy and are likely to explore all options to block the deal.

Saudi Arabia, the bastion of Sunni Islam, remains viciously opposed to Shia Iran, not merely over religious issues, but geopolitically. The US has long been the guarantor of Saudi national security. The understanding with Iran, if it endures, threatens Saudi supremacy in the entire Arabian Peninsula. This can also put the US in a position where the Arab states can no longer assume U.S. hostility toward Iran or U.S. support of their interests.

As India and Russia and other countries rush to safely evacuate their citizens from Yemen, the Saudi-led coalition’s air strikes on Yemen are the first indication of the region having to bear the burden of colliding strategic interests.