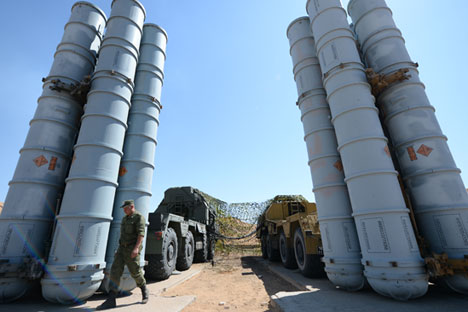 The Russian government says that the cancelation of the ban on S-300 exports to Iran is due to the changing international situation, though it is unlikely that Tehran will receive the systems this year. Observers say that Russia may be trying to send Iran a signal that it would be better for Tehran to cooperate with Moscow than to form closer ties with the West.

Russian President Vladimir Putin has lifted the ban on supplies of the S-300 surface-to-air missiles to Iran that was introduced in 2010 by then-president Dmitry Medvedev. In Moscow Putin’s decision is being linked with the "substantial progress" made during the recent international talks on Iran's nuclear program.

According to the TASS news agency, Iran's Higher Security Council is expecting the supplies of the air defense systems this year, while the Iranian Defense Ministry has emphasized that Moscow's decision will strengthen the ties between the two countries. The U.S. State Department, however, has said that supplying Iran with the S-300s would not be a constructive move.

New opportunities for MTC between Iran and Russia

Russian experts say that Putin's decision was expected and, along with the Foreign Ministry, tie it to the success reached at the recent nuclear negotiations in Lausanne, remarking that Russia aims to occupy a niche in military-technological cooperation with Iran as soon as Western sanctions against the country are lifted.

Anton Khopkov, director of the Energy and Security Center, says that now "most of the countries that want to be Iran's partner are thinking how to develop collaboration." Khopkov also believes that Russia's decision regarding the S-300s will not be the last in its relations with Iran.

At the same time there is an opinion that Russia is sending Tehran a certain signal, cautioning it against collaboration with the West. According to Alexei Arbatov, head of the Center of World Security at the Institute of World Economy and International Relations, this amounts to a message "that it is not necessary to completely switch to cooperation with the West."

"The West cannot give Iran most of what Russia can," says Arbatov, referring primarily to  arms supplies: Such moves would be harshly criticized by Israel and by the Gulf monarchies, with whom Europe and the U.S. enjoy a close relationship.

Moscow fears that Iran will turn to the West and ignore Russia's interests. "Moreover, Iran's interests may harm Russia," continues Arbatov. "For example, it could enter the oil and gas market, which will lead to a reduction in prices, and become an alternative source for the West at Russia's expense."

Which missiles and when?

There is also the issue of which missiles Russia will supply to Iran and when. According to Director of the Institute of Political and Military Analysis Alexander Khramchikhin, the S-300 PMU-1 missiles are no longer being produced. It is still unclear whether Iran will accept the systems with the new modification, since Tehran had earlier refused similar proposals.

Furthermore, Khramchikhin believes that it will be difficult to supply systems that are already being used in the Russian armed forces, since they will need to be altered significantly. However, this alteration would be unrealistic to carry out in any acceptable period.

There are also problems regarding the supplies of the perfected S-400 systems. According to Khramchikhin, it will be difficult for Russian companies with the current potential to build the systems since they are already overloaded with orders up to 2020 for the army's rearmament program. Khramchikhin believes that in this case the supplies may be postponed for eight to 10 years, which will is unlikely to suit Tehran.