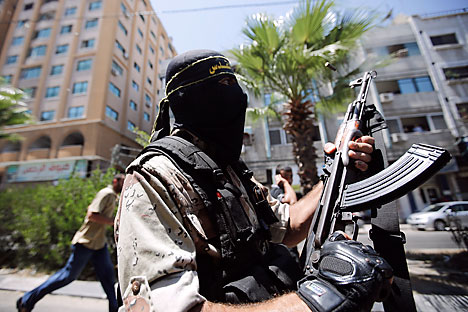 Among international terrorist organizations, the role of radical Islamists is increasing. Source: EPA

International terrorism has become one of the most dangerous threats to mankind and it has turned global. This is the considered opinion of Colonel-General Igor Sergun, Director of GRU, the Main Intelligence Directorate of the Gen. Staff of the Russian Armed Forces. Speaking in mid-April at the IV Conference on Security in the Defense Ministry in Moscow, Sergun provided a detailed analysis of the problem. Since he is not among the public figures frequently cited in the media, RIR decided to offer its readers the most complete summary of the key theses of the general.

According to the chief of the Russian military intelligence, there is a steady trend towards globalization of activities of extremist organizations. This includes a wide geographic spread, strengthening of the interaction between previously disparate groups, as well as swift adaptation to situational changes.

Among international terrorist organizations, the role of radical Islamists is increasing.

“Their leaders are developing collaboration and seek to create zones of instability, which include not only countries, but entire regions,” Sergun said. ‘Al-Qaeda’ remains one of the most powerful terrorist organizations, although in current conditions it has become to a greater extent “the banner of the war against infidels” and “related regional groups operate almost independently”.

Speaking about the genesis of the problem, Sergun said, “It is no secret that it was at the instigation of Western ‘partners’ that since the 1980s, Islamic extremism was rapidly gaining momentum. It is the legacy of the United States and other NATO member states, as well as of some countries in the Middle East and Central Asia.”

To counter the Soviet troops in Afghanistan, there was heavy arming of scattered groups of Mujahideen who “subsequently merged into major terrorist groups and movements,” he said.

Following the same pattern, “with financial and military assistance from Washington and its allies to eliminate the regime in Syria, unwanted by the West, the ‘Islamic State of Iraq and the Levant’ and ‘Jabhat al-Nusra’ were created. Military intervention in Libya by the Alliance entailed similar results.

The GRU chief said “the terrorists have declared the establishment of an ‘Islamic caliphate’ on occupied territories and started to set up their own ‘public institutions’, including financial and judicial systems. Sustainable centralized control over the armed groups has been organized,” he said.

The situation in Africa

At the same time, the strengthening of ISIS has seriously destabilized the situation in Africa.

“ISIS provides substantial military and financial assistance to the local extremists, sends reinforcements to the Syrian and Iraqi terrorists.”

According to Sergun, groups receiving such support are, ‘Ansar al-Sharia’, operating in North Africa, and ‘Boko Haram,’ in the west of the continent, while the greatest threat to the stability of East Africa is the Somali terrorist organization ‘Al-Shabab al-Mujahedeen,’ responsible for a number of high-profile actions.

Equally alarming is the situation that is developing in the Middle East and Central Asia. According to the general, extremist organizations such as the ‘Taliban’, ‘Hizb-ut-Tahrir’ and Islamic Movement of Uzbekistan maintain high combat potential.

“Currently, in Afghanistan alone, about 50 thousand militants are fighting. Afghan and Pakistani territories host a network of terrorist training camps, including for suicide bombers.”

In addition, according to Sergun, active dissemination of radical Islamist ideas “has a negative impact on the development of the situation in Southeast Asia. In particular, unpredictable consequences could be caused by the extremist organization, ‘Jamaa Islamiya’, whose main goal is the creation of a single Islamic theocratic state within the borders of Brunei, Indonesia, Malaysia, Singapore and the Muslim provinces of Thailand and the Philippines,” Sergun said.

In recent years, the level of terrorist threat in Europe has increased. This is primarily due to the insurgents returning from the “hot spots” ready to use the gained experience at home.

“More than 600 jihadists returned in the past four years to Germany alone,” Sergun said.

Finally, according to Sergun, the extremists' influence has spread to include some South American regions.

“The Tri-border Area, located along the junction of Argentina, Brazil and Paraguay, is considered a springboard by the extremists,” the general said.

Referring to the economic base of terrorism, Sergun noted that “reliable cash-flow channels include various non-governmental organizations and foundations. For example, in the states of the Arabian Peninsula there are about 200 such organisations.”

In addition, “a major source of income is control over drugs production and trafficking. This activity brings the Islamists of the Middle East and Central Asia up to US $500 million a year.”

In general, he said, under the slogan of struggle for ‘pure Islam’, international terrorism is becoming a form of transnational crime. “In fact, it has become a lucrative business with capital turnover running into billions, with drug trafficking, hostage-taking, smuggling weapons and precious metals,” said the head of the GRU.

Thus, according to the head of Russian military intelligence, “we should expect that, in the short term, the level of terrorist threats in the world will remain high. Scaling up of extremist groups, among others at the instigation of the United States and its allies, especially in the Middle East and Central Asia, poses a real threat of terrorism export in Europe, the republics of the CIS and the Asia-Pacific region.”