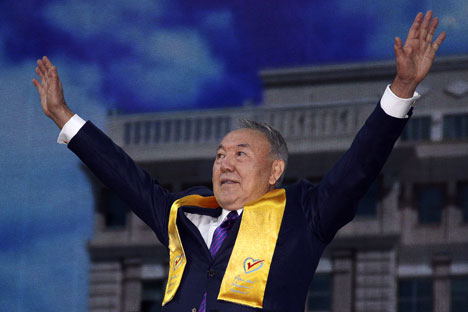 Analysts have said that if Nazarbayev leaves the scene, Moscow risks losing one of its most crucial allies. Source: Reuters

Presidential elections were recently held in Kazakhstan, ahead of schedule. The incumbent head of the Republic Nursultan Nazarbayev emerged the winner, garnering over 97% of the vote. While many have called these elections uncontested, such uncontested elections suit Russian interests.

Moscow warmly welcomed the re-election of Nursultan Nazarbayev as President of Kazakhstan, the largest country in Central Asia. For Russia, Kazakhstan acts a buffer state between Russia and the volatile Central Asia Region. It is also an important economic partner.

Analysts have said that if Nazarbayev leaves the scene, Moscow risks losing one of its most crucial allies. The fate of the Eurasian Economic Union would also become uncertain.

“In the recent history of Kazakhstan, there have been practically no contenders for the role of the first citizen. Nazarbayev, for the vast majority of the population, is the guarantor of stability,” political scientist Alexander Knyazev told RIR.

Moscow and Astana remain partners despite their leaders’ reservations

Kazakhstan remains one of the least problematic states for Russia in post-Soviet space; as Nazarbayev appreciates his country’s relations with its northern neighbour. He is aware that cooperation with Moscow fetches more benefits to his country than confrontation.

Astana is one of the driving forces of the Eurasian integration project.

“In the Kazakhstan establishment, everyone understands that Russia is our closest partner. The people also understand this. It is most likely that the president will work to ensure that, after his departure, relations remain at a high level,” Daniyar Kosnazrov, Head of Department for the Study of Central Asia and the Caspian Region, at the Library of the First President of Kazakhstan, told RIR.

This is despite the fact that tensions exist between the two countries, particularly about the way in which Eurasian integration is being pursued.

“One of the main problems in bilateral relations with Russia, and with participation in the Eurasian integration project, is their politicization and quickened pace, including the expansion initiated by the Russian side,” said Knyazev. “Kazakhstan is not ready for this, as many consequences of integration are not clear yet; not sufficiently detailed.”

The question of succession

The stability of Kazakhstan rests primarily on the personality of Nazarbayev. However, he is 74 years old and, once he is out of the scene, the country may see the rise of very dangerous forces. Inter-ethnic conflicts could see a rise.

Events in Ukraine have shaken up post-Soviet countries with large Russian populations. Russians account for almost 24% of Kazakhstan’s population, and are concentrated in the northern regions, close to the Russian border.

“The Kazakhstan elite have already started to discuss the possibility of a “Russian Spring” being transferred to Kazakhstan. Two components are needed for this to occur; the presence of radical nationalist sentiments, and Russophobic and anti-Russian feelings in the political establishment,” Alexander Sobyanin, member of the Expert Council of Political Conjuncture Centre told RIR. “And such sentiments are emerging.”

“Nazarbayev rejects nationalism – he is a Kazakh patriot, but also an internationalist. And as long as he stays in power, the victory of the nationalist camp is simply impossible,” Sobyanin said. “It is possible that his successor will be able to pursue the same balanced line, and avoid the risks associated with the strengthening of nationalist sentiments.”

“No matter who becomes Nazarbayev’s successor, he will not have such a level of political will and acceptability which the incumbent president possesses. This allows him, sometimes against powerful domestic political forces, to make decisions that are necessary for the republic,” said Knyazev. “Therefore, once Nazarbayev departs, difficult days will come for Kazakhstan and its relations with Russia.”

Meanwhile, some analysts believe that the destabilization of Kazakhstan may serve the interests of the Americans, who are trying to deprive Russia of its allies.

“Some political analysts say that the tons of dollars brought onto Bishkek, were destined not to destabilize Kyrgyzstan, but Kazakhstan,” said Sobyanin.