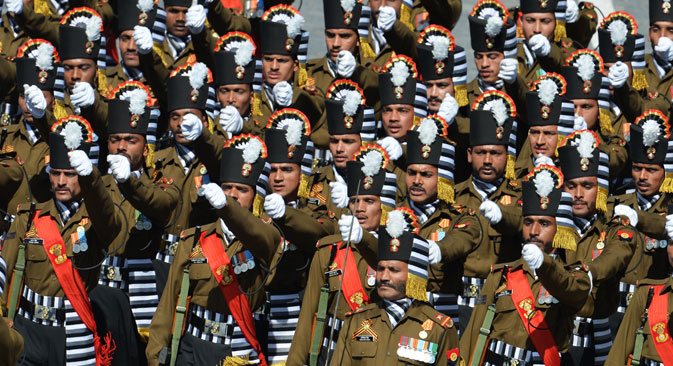 Grenadiers of the Indian Armed Forces at the military parade to mark the 70th anniversary of Victory in the 1941-1945 Great Patriotic War. Source: Vladimir Pesnya / RIA Novosti

The 70th Victory Day parade was significant not only for commemorating the Allied victory over the fascist forces, but also for the lasting impact it may have on the evolving global order. The participation of the Presidents of India, China and South Africa in Moscow strengthened the BRICS and the RIC bonding, and helped bolster Russia’s clout.

The grand Victory Day parade in Moscow was significant not only for commemorating the 70th anniversary of the Allied victory over the fascist forces, but also for developments that may have a long lasting impact on the evolving global order.

During his interview with TASS, Indian President, Pranab Mukherjee called the Victory Day a “determining event in the 20th century”, as it witnessed the defeat of Fascism and ended the prospects of world domination by Hitler. Mukherjee lauded the Soviet role in the Second World War, and emphasized that the victory could not have been possible without the immense sacrifice made by the Russian people. The Allies’ victory generated the promise of an international order, based on cooperation and mutual assistance. Russian President Vladimir Putin echoed Mukherjee’s sentiment when he said, “Our common task should be offering equal-security system for all countries.”

For the first time, a 75-member contingent from India’s Grenadiers Regiment participated in the parade.  The participation not only reflected India’s commitment to friendship with Russia, but also India’s interest to stand with Russia in trying times. The Indian media covered the event, narrating how the contingent marched on Red Square to popular applause and how the leader of the Indian contingent shook hand with President Putin.

There is a debate over India’s participation in the event. Those opposed to India’s high-level participation in the Victory Day celebrations argue that India, which is keen to strengthen relations with the United States and its Western allies, should have taken a more nuanced stand on Russia, and particularly on the conflict in Ukraine.

The recent visit of Prime Minister Narendra Modi to France, Germany and Canada, and finalization of the Rafale deal with France, need mention in this context. India is interested in maintaining a balance in its relations with Russia and the West.

The new mantra is cooperation in a mutually beneficial framework. India understands that its reliance on the US may not only distance it from Russia, but also push Pakistan closer to Russia and China, a scenario Indian policymakers can hardly afford.

However, the traditional India-Russia relationship, which President Mukherjee termed a “special and privileged strategic partnership,” is unlikely to succumb to geopolitical pressures.

The commemoration ceremonies have strengthened relations between Russia, China and India. Besides the Indian contingent, a contingent from the Chinese army participated in the parade. Chinese President Xi Jinping and South African President Jacob Zuma were also present along with President Mukherjee. While India and China are members of the trilateral RIC, with South Africa, they are also members of BRICS.

The next BRICS summit will take place in Ufa in July, under Russian chairmanship.

The Allied Victory in World War II led to the creation of the United Nations Organization as the guarantor of international peace and security. Russia and its partners in BRICS have stressed on the UN’s role in evolving a just and fair global order. UN Secretary General Ban Ki-moon’s participation at the Victory Day celebration was significant because it showed that, despite the stand-off between Russia and the West over Ukraine, the UN recognized the enormous significance of the event.

The trouble in Ukraine cast its shadow as Western leaders boycotted the event. However, Putin shrugged off their non-participation and went on to thank the people of the Allied powers.

“We are grateful to the people of Great Britain, France and the United States for their contribution to victory,” he said.

The non-participation of western leaders on such an occasion has further widened the chasm between Russia and the West. Though German Chancellor Angela Merkel visited Moscow the day after the parade (on May 10) to pay homage to those who sacrificed their lives during the war, the non-participation of the other war-time allies has narrowed the scope for negotiation over differences on Ukraine.

The polarization in international politics, in terms of the East-West stand-off, may not augur well for international peace and security, which was, in fact, the original message of the Victory Day 70 years ago.