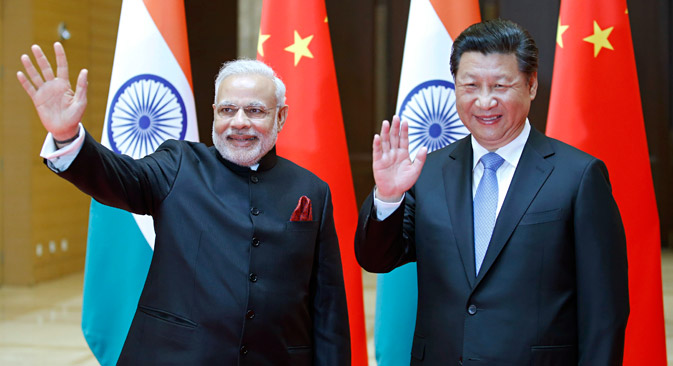 For Russia, the rapprochement between India and China is an issue of paramount importance. Source: AP

Russia is avidly hoping for a rapprochement between India and China after the ongoing, high-profile visit of India’s Prime Minister Narendra Modi to China. If political tensions between India and China decrease, then the Russia, India, China (RIC) combine can begin to function as the world’s economic and a strategic powerhouse, getting the United States worried.

Indian Prime Minister Narendra Modi travelled to China on Thursday May 14, for negotiations with President Xi Jinping of the People’s Republic of China. As part of the three day visit Modi hopes to achieve a breakthrough in relations with China, which have so far been hindered by a boundary dispute and territorial claims from both parties. Judging from indirect indicators, the visit might be a game changer in relations between New Delhi and Beijing.

The program for Modi’s visit to China has been designed so that the Indian Prime Minister will be received by China’s highest officials. Breaking protocol, the Chinese President travelled to his native city Xi'an, and personally met Modi, not only for a summit-level meeting which lasted over 90 minutes, but also for an informal tour of Xi’an’s major Buddhist historical sites. This is the first time Xi has received a leader outside Beijing. The gesture is being viewed as a serious attempt to reduce bilateral differences and “improve trust” between the two countries. President Xi was also reciprocating a similar gesture made by Modi when the former visited India last year in September. Modi had received Xi in his native Ahmedabad city.

The Indian prime minister is in Beijing on Friday to meet Chinese Premier Li Keqiang. His visit will conclude with a trip to Shanghai where the Indian delegation will hold negotiations with representatives of China’s business circles.

For Russia, the rapprochement between India and China is an issue of paramount importance. For a long time, the concept of a strategic triangle between Russia, China and India has existed, but until recently it has not appeared particularly viable. The RIC, as the group is known, has been largely an economic forum, without much to show in strategic terms.

The conflict between China and India over their boundary is unresolved, and appears intractable. With this visit, it is likely some issues will get resolved and the main difficulty for the economic integration of Eurasia may have been resolved. This means that Moscow has new opportunities in the East.

In this context, the telephone conversation between Russian President Vladimir Putin and the Indian prime minister less than a day before Modi’s visit to China is significant. According to the Kremlin press service, and Modi’s own tweets, the Indian Prime Minister has confirmed his participation in the forthcoming BRICS summit in July and the in the Shanghai Cooperation Organization summit, both in Ufa. He also discussed with the Russian President various issues associated with the expansion of the Russia-Indian privileged strategic partnership.

Last week, Putin received Chinese President Xi in Moscow, where more than 30 agreements were signed by the two leaders.

Svobodnay Pressa (SP): What does the rapprochement of Asia’s two economic giants mean for Russia?

“The idea of a Russian, Chinese and Indian triangle was put forward by Evgenny Primakov at the end of the 1990s,” said Alexey Maslov, Director of the Centre of Strategic Research on China at the Russian University of People’s Friendship. He is also head of the Department of Oriental Studies at the Higher School of Economics.

“But then it was thought that Russia would play the leading role in the ‘triangle’. Now it is clear that China will play this role, and this changes the entire situation,” he said.

“One needs to understand that strengthening of the triangle will take place according to China’s concept of a new ‘Great Silk Road’. In other words, China will unite countries based on mutual self-interest, primarily, economic.”

SP: Specifically what projects could unite India, China and Russia?

“First and foremost is the transition to keeping accounts using a common currency. It is clear that such a currency is not going to appear tomorrow, but in the best case scenario, it could be in 5-6 years. This is a very attractive project. Furthermore, our three countries can introduce a preferential trade system and establish joint enterprises. We can probably develop common rail and aviation routes for cargo.

Essentially, today China is creating a new political reality, and it is Beijing that is controlling this reality. But a lot depends on how effectively China is able to normalize relations with India. This is not easy to do, considering the territorial claims of the parties and the mutual conflict they are causing, which have appeared as part of previous Indian-Chinese negotiations.”

SP: Do you think that Beijing will succeed in this?

“I expect that as part of the visit Modi will conclude an agreement which will freeze territorial disputes. I think that China will take economic measures to provide India with credit to develop their industry.

I must say that today India is China’s natural competitor in terms of production costs. It is possible that China will locate some of its enterprises in India. In the near future, work will begin on Chinese investments into roadways and railways in northern India.

In essence, within the framework of the Great Silk Road project, Beijing is hoping to gain control over a vast territory – from Southeast Asia to the Caucasus. This concept implies economic integration, financial and political cooperation, common logistics, and infrastructure.

For now, this concept covers the internal territories of China, plus the neighbouring countries, like the Central Asian republics and a number of countries in Southeast Asia. Russia has not yet signed up to this concept, but said it is ready for cooperation within the framework of the two unions; the Silk Road and the Eurasian Economic Union. (India has also not come on board the Silk Road project).

SP: Is it possible to say that in this situation, it is particularly advantageous for Russia to turn to the East?

“At present, Russia is the largest country that is supporting the “expansionist” policy of China. This reinforces our political and economic positions. On the other hand, a number of risks and conflicts can arise in the future, which can be resolved only if Russia will be able to equally engage with the West, and with the East,” said Maslov.

“Between Beijing and New Delhi there is a territorial dispute, arising from (before) the Sino-Indian border war in 1962, which ended with the defeat of India,” notes Andrey Ostrovsky, deputy director of the Institute of Far Eastern Studies, and member of the European Association of Sinologists.

“As a result, India now occupies part of Chinese territory – the state of Arunachal Pradesh, and China a part of the Indian territory – the Aksai Chin plateau. Until these territorial disputes are resolved, achieving normal relations between the two countries will be rather difficult.”

“However, such issues can be resolved, gradually, through negotiations. Take for example Russia-China relations. In 1964, when Mao Zedong for the first time raised the question of the fate of 1.5 million square kilometres, which Tsarist Russia had taken from China, this issue was far from being resolved. However, in 2004 – 40 years later – the final demarcation of the Russian-Chinese border was carried out. Given goodwill on both sides, countries are quite capable of resolving their border issues. As soon as China and India settle their territorial disputes, all political questions will be immediately resolved as well.”

“It must be said that the settlement of this border issue is long overdue, as economic ties between India and China are developing very quickly. The volume of India-China foreign trade is already comparable to the volume of Russia’s trade with China – around $100 billion. The important thing is that problems between India and China will be addressed not only within the BRICS format, but also within the framework of the Shanghai Cooperation Organization (SCO), in which Russia plays an important role.

As we know, New Delhi has applied for membership in the SCO. It is quite possible that during the SCO Summit in Ufa this July, India’s application will be approved.

SP: What constitutes mutual economic interests of India and China?

“Of interest are the markets of both countries – these are huge markets. In fact, almost all the excess production which China is capable of can be sold in India – and vice versa. Moreover, there are also products and services that are produced only in India, or only in China. In India these are, above all else, information services – software, while China is hoping to build a high-speed rail network in India.

SP: What is Russia’s place in these two economies?

“Our place in the Chinese economy seems to be emerging from the 32 agreements signed by President Xi during his May visit to Moscow. According to these agreements, China will invest into our infrastructure development program. In addition to the high-speed railway from Moscow to Beijing, which is to be built in 2023, we have joint infrastructure projects in Asia, such as the construction of the railway route Kyzyl-Kuragino and the Far East Seaport. Additionally, China is providing Russia with lines of credit. We, on the other hand, will supply gas to China via the western route, as well as 100 Sukhoi Superjet airplanes.

India is also interested in Russian gas. The country is huge, and does not have enough energy resources. Yes, problems do exist in organizing the supply of gas, for example, because of the difficult terrain involved. However, as the Chinese have shown by building a high-speed railway to Tibet, this is not something insurmountable,” said Ostrovsky.