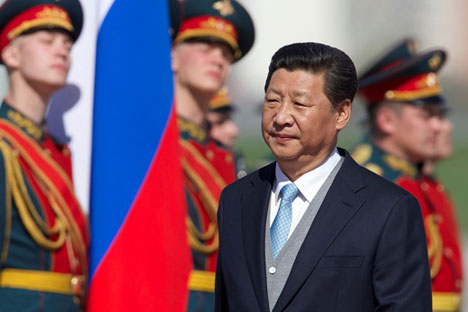 Moscow and Beijing may create a condominium in Central Asia in which Russia will be the guarantor of security and China - the largest economic player. Source: AP

Besides the photographs taken during the Victory Day Parade on May 9 of Vladimir Putin with Xi Jinping sitting next to him, besides the Chinese soldiers marching on Red Square, which became the most important symbol of the Chinese leader's visit to Moscow, the talks between the two leaders also resulted in many commercial agreements. Beginning in May 2014, when due to the crisis in Ukraine and western sanctions China started playing a major role for Russia, the signing of a large number of documents each time the two leaders meet has become a tradition.

On May 8, the two countries signed 32 agreements in the Kremlin. The most significant block concerns the access for Russian companies to Chinese financial platforms and instruments, first of all credit lines in yuan.

Moscow and Beijing have been planning to leave the dollar and euro in mutual payments since the middle of the 2000s. Against the backdrop of western sanctions and Washington's talk of possibly denying Russia's largest banks correspondent accounts in the US and the EU, in the event of escalation in Ukraine. This has made transactions in alternative currencies a vital necessity. Therefore, even though China's currency is not freely convertible, Russia is still moving towards an increased use of the yuan.

Moreover, the Russian Direct Investment Fund signed agreements on the creation of a joint investment bank with structures from the CITIC group for bringing Russian companies to Chinese platforms, while with the China Construction Bank it signed an agreement on a joint credit mechanism that will facilitate Chinese investments in projects on Russian territory.

Unlike previous agreements, the countries did not sign anything serious in the field of energy. Gazprom and CNPC signed an agreement on the main conditions for supplying gas to China along the "western route." On November 10, 2014, the sides had already signed framework agreements on gas supplies along the "western route." The history of the "eastern route" (the Power of Siberia gas pipeline with the resource base in the Chyandinsky and Kovyktinsky deposits) has shown that several years can pass before the commercial gas contract is signed.