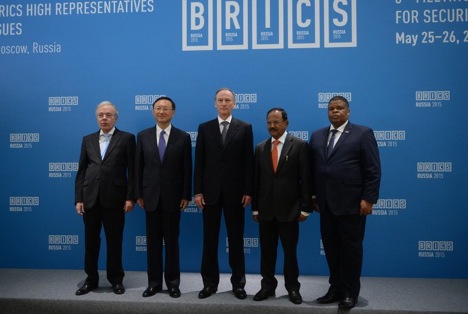 From Left: Antonio José Vallim Guerreiro, Ambassador Extraordinary and Plenipotentiary of Brazil to the Russian Federation, Yang Jiechi, member of the State Council of the People's Republic of China, Nikolai Patrushev, Secretary of the Security Council of the Russian Federation, Ajit Doval, National Security Adviser to the Prime Minister of the Republic of India, and David Mahlobo, Minister of State Security of the Republic of South Africa, at the Meeting of BRICS National Security Advisors. Source: BRICS2015.ru

According to Secretary of the Russian Security Council Nikolay Patrushev, cooperation within BRICS is aimed at building a multi-polar system of international relations based on the principles of justice and equality.

Secretary of the Russian Security Council Nikolay Patrushev has said it’s necessary to build up cooperation in the military and technical field and in the fight against terrorism within the BRICS countries (Brazil, Russia, India, China and South Africa).

"I am convinced there is a need for increased cooperation between our countries in such areas as military and technical cooperation, joint struggle against terrorism, extremism, separatism, cross-border crime as well as in countering new challenges and threats," he told an annual meeting of the security representatives of the BRICS member-countries.

Patrushev noted that BRICS had managed to gain a reputation of a reputed international association. Back in 2011 many skeptics "predicted it ["the five"] would be short-lived", but "the real results of our work have proved to be more convincing than any criticism," he said, voicing confidence that the BRICS countries have proved their ability to jointly tackle a wide range of tasks.

Why a BRICS military bloc won’t happen in a hurry

Patrushev added that BRICS was playing an increasingly important role on the international political scene. "It was thanks to the principled stand of Russia and China in the UN Security Council supported by other members of "the five" that foreign military intervention in Syria was prevented, the Syrian chemical stockpiles were eliminated and thus prevented from falling into the hands of terrorists," he added.

According to Patrushev, cooperation within BRICS is aimed at building a multi-polar system of international relations based on the principles of justice and equality. "This implies the renunciation of the outdated practice of the bloc diplomacy," he said.

The Secretary of the Russian Security Council said that "the five" was interested in expanding its presence in those regions where integration processes were gaining momentum, where they "do not mix politics and economy and, alternatively, remove all barriers to trade, exchange of technologies and investment.".