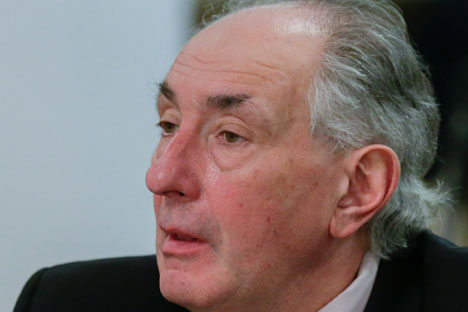 The BRICS Academic Forum met in Moscow to mull over the agenda for the forthcoming summit and discuss the way forward for the organisation. Professor Georgy Toloraya, head of the Russian Committee for BRICS research, briefed RIR about the outcome of that meeting.

Professor Georgy Toloraya, Executive Director of the Russian National Committee for BRICS Research told RIR about the outcome of a BRICS (Brazil, Russia, India, China, South Africa) Academic Forum in Moscow, during which experts from the five member countries discussed the future of this association.

What is the main outcome of your meetings?

The forum allows for exchange of views on key issues related to the development of BRICS. The agenda of the forum shows the shifting of the centre of attention, because the academic community takes the lead.

Today the issues that come to the fore are global financial architecture, peace and security, sustainable development. And the scientists are looking for answers to these questions.

We have agreed on a long-term strategy for the development of BRICS. This document will be presented to the leaders in Ufa through the Brazilian Sherpa. It does not provide answers to all the questions, but at least it identifies the range of issues.

We are also busy setting goals that BRICS should reach. What will BRICS be like in 2025. What are the possible scenarios...

What can we expect in 2025? Taking into account the fact that the political component of BRICS activities has strengthened.

Today we attended the speech of the Russian Sherpa, Deputy Foreign Minister Sergey Ryabkov. He warned against perceiving BRICS as an organization. But Russian experts believe that the BRICS should still move towards institutionalization. The coordinative component of this association should be stronger, because only in this way can we solve problems, instead of just exchanging views.

I think that by 2025, the BRICS will significantly increase their share in the world economy and trade. A new global financial system with a significant presence of these countries, compared with the current situation, will be created. Or maybe even a financial system of its own, allowing the economies to support each other.

Humanitarian and cultural exchanges will increase significantly. As a result, the standard of living will rise. Many social problems will be solved. A lot of infrastructure projects will be realized.

Do the representatives of other BRICS countries share this vision?

At varying degrees. Everyone has their own point of view. We want to find a common denominator. Unfortunately, it is minimal. The main thing is that there is an understanding of what targets should be set, and to look for ways to achieve them.

What is the importance of the upcoming summit in Ufa?

For the Russian Federation, it is important because it takes place in the context of growing confrontation with the West. The very fact of the meeting will strengthen our international position.

It is important that the economic strategy will be agreed on, a new Development Bank will be established, the currency pool, and the already created virtual secretariat, which initiates the institutionalization of the BRICS.

Therefore, it will be a landmark summit?

Each summit turns out to be a landmark one, because the association is young. It's difficult to predict, because, for example, it was expected that the summit in Brazil last year would be ordinary, but because of the worsening of the international situation it gained great importance.

The crises become more frequent. BRICS reacts to them and quickly develops a unified position. The contacts on regional conflicts are expanding. Now there is a meeting of deputy foreign ministers to discuss the situation in the Middle East. And apparently, the intensity of such contacts will increase.