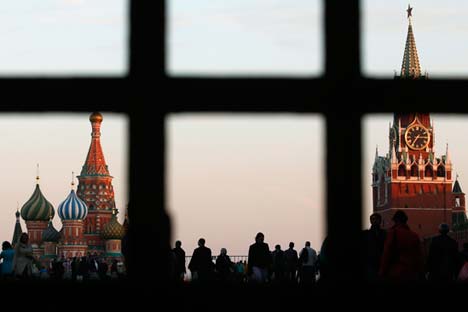 Russian blacklist contains the names of politicians from Poland, Germany, the UK, the Nordic countries and the Baltic states. Source: Reuters

After Russia turned a German Bundestag member back from the Sheremetyevo Airport, Moscow made public a list of politicians from the EU who have been banned from entering Russia. The ban provoked an angry outcry from the European Union, which called the ban “unjustified” and without legal basis.

Tensions between Moscow and the European Union (EU) snowballed after Russia officially made known that it had banned 89 individuals, mostly politicians and foreign policy specialists from EU countries, from entering Russia. The announcement came after German Bundestag member, Karl-Georg Wellmann, was turned back from Moscow’s Sheremetyevo airport on May 24.

The standoff between the EU and Russia over Moscow’s takeover of Crimea, reached a critical level when Moscow confirmed that it had blacklisted a number of people, including former British deputy PM Nick Clegg, former Belgian premier Guy Verhofstadt and Bruno Le Roux, the leader of the Socialists in France’s National Assembly, from entry into the country in response to sanctions imposed on it by the EU.

The outraged reaction from Europe claimed the action was “unjustified” and that Moscow was acting contrary to international law.

The EU had urged Russia to make public the blacklist after Wellmann, the German MP and foreign policy specialist, was turned back from Moscow Airport. His parliamentary colleague, Johannes Singhammer, vice president of the Bundestag (parliament), cancelled his visit to Moscow in protest.

The ‘blacklist’ contains the names of politicians from Poland, Germany, the UK, Scandinavian countries and some Baltic states.

Dutch Prime Minister Mark Rutte was the first to criticise the decision after Russian declassified the list, pointing out to Moscow that its blacklist was “not based on international law, not transparent and cannot be challenged in court.”

The EU’s foreign policy service described the Russian list as an "arbitrary and unjustified" measure. A number of European countries also expressed their outrage, with a spokeswoman for Britain's Foreign Office saying there was no justification for the list:

"If Russia's intention is to put pressure on the EU to ease sanctions then this is not the way to do it," the spokeswoman said.

Commenting on these allegations, Russian Foreign Minister Sergei Lavrov dismissed them as “absurd” and “ridiculous.” He said that the blacklist included the ones who had "most actively” backed what he described as a “coup” in Ukraine, which he said had resulted in “Russians” in Ukraine “being subjected to harassment and discrimination."

Andrei Suzdaltsev, deputy dean of the Faculty of World Economy and International Affairs at the Higher School of Economics in Moscow, believes that the outrage in Western countries was caused by the very fact that the Russian Federation responded to the sanctions imposed on it.

Suzdaltsev claimed that Moscow’s response was “symmetrical,” despite no indication that any of the individuals named on the blacklist have been involved in any wrongdoing.

"Russia's symmetrical response is categorically not accepted," Suzdaltsev told RIR, stressing that in his view the EU believes that it has the right to impose such measures, while denying the Russian Federation “the same right.”

In Suzdaltsev’s eyes, the EU's outrage over Russia's list shows that Europe and the United States refuse to establish “an equal dialogue” with Russia: “They believe that it is only possible to speak with Moscow in the language of ultimatums, scandals and demands," he said.

According to Suzdaltsev, the Russian Federation has encountered genuine bewilderment in Europe, which, seeing itself as the “holder of the most important values in the world,” suddenly found itself under the impact of someone else's sanctions.

Andrei Kortunov, head of the Russian International Affairs Council, believes that while the use of blacklists in politics raises a number of questions – concerning the procedure, criteria and conditions for a possible delisting – it still would be "a little hypocritical" to blame it on the Russian Federation in this case, since Moscow was not the first to introduce these lists.

A message from Moscow

The list contains no representatives from a number of European countries, such as Cyprus, Hungary, Austria and Greece, known for their more moderate attitude to Russian policy. "As a matter of fact, it can be considered a certain message to the countries that the Russian Federation maintains good relations with," said Kortunov.

The Russian blacklist can be seen as evidence that Moscow has different approaches to different states of the EU, according to Igor Bunin, head of the Center for Political Technologies: "The countries that are showing greater openness toward Russia are less exposed to sanctions," he said.

What’s behind the blacklist dispute?

The root of the disagreement lies in the differing perceptions toward the sanctions on the part of Moscow and the EU.

The European Union sees the 2014 seizure of Crimea by Russian troops and the subsequent referendum held on secession from Ukraine as contravening international law, thereby justifying the imposition of sanctions. It also accuses Russia of participating in a covert war in eastern Ukraine and supplying rebel fighters there with arms. The EU believes that the Russian travel ban is groundless, since the people named on the blacklist are not perceived to have been involved in the breaking of international law.

The Russian position is that the Crimean referendum was legal and thus no contravention of international law occurred, making the EU sanctions baseless. It also claims that none of its troops are participating in the conflict in eastern Ukraine. Russia sees the travel ban as a legitimate and symmetrical response to the EU travel bans placed on various Russian individuals in 2014.