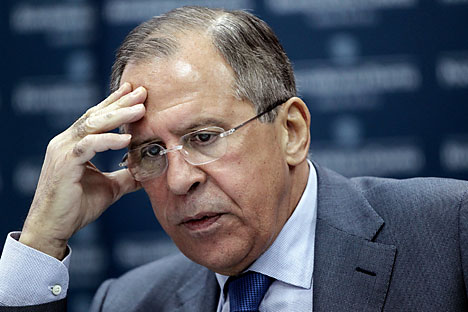 The minister called the US rhetoric counterproductive and harmful. Source: Olseya Kurpyaeva / RG

The Russian foreign minister said Moscow thinks a number of actions the US takes, including in the framework of deploying the global missile defense system, directly violate the INF Treaty.

"Precisely considering the INF Treaty, our American colleagues have long been asking questions on how responsibly we implement the document," Lavrov said. "We answer that there is a mechanism of Russian-American consultations on reviewing the agreement and possible complaints. We asked the Americans to formulate precisely their complaints and concerns about the Russian Federation," he noted.

The foreign minister said he regrets the fact that over the two rounds of consultations, US failed to specify their suspicions neither at the level of preparations nor during the consultations themselves.

"They only say, ‘You test-launched a rocket, you know what we are talking about’," he continued. "But this not a serious talk. We will be ready to consider concrete evidence that gives Americans grounds to think that we violated something," Lavrov stressed.

"We have formulated our rather concrete questions to the American side that we think that a number of actions it takes, including in the framework of deploying the global missile defense system, directly violate the INF Treaty," Lavrov said.

"I still confirm this officially. We are open for an honest, but specific, not unsubstantiated dialogue in order to remove any concerns," Lavrov stressed. "We do not have any intentions to break this agreement," he added.

The minister called the US rhetoric counterproductive and harmful.

Lavrov commented on the statement of US General Martin Dempsey on Washington's plans to deploy its cruise and ballistic missiles in Europe and Asia that might be targeted against Russia.

Lavrov stressed that these issues are "too serious to react off the top of one's head."

"In principle, we believe it is absolutely counterproductive and harmful to build up militarist rhetoric, moreover that all our partners say unanimously that they do not want the return of the Cold War time," he said.

"If this is so in fact, then one should be probably more careful when saying," Lavrov said.

Lavrov said there are concerns about issues related to military construction and these concerns are always addressed and they need to be solved further through a "direct and frank dialogue," the minister said.

"We had these opportunities with all our Western partners both in a bilateral framework and in the framework of the NATO-Russia Council," he reminded.

These communication channels were frozen not due to Moscow’s fault but upon the initiative of the Western partners, including those in the 2 plus 2 format, when foreign ministers and defence ministers met, Lavrov said.

Russia's Deputy Defense Minister Anatoly antonov on Tuesday said the United States keeps alleging Russia is in breach of the Intermediate-range Nuclear Force treaty in order to excuse its own steps Washington presents as retaliatory.

"One has the impression the United States is making a fuss about alleged Russian violations to create a pretext for implementing its own, ostensibly retaliatory military steps, expected to assert US leadership in resisting a Russian military threat - a myth Washington keeps inflating in defiance of obvious facts," Antonov said.

He remarked that the Russian Defense Ministry had taken note of the timing of the media leaks with calls for joint actions by the United States and its allies to compensate for Russia’s alleged violations of the INF treaty.

"These publications were timed for another upsurge in the anti-Russian campaign in the West ahead of the G7 summit meeting and the forthcoming EU summit, which will be discussing the prolongation of anti-Russian sanctions," Antonov said.

"We would like to draw the United States’ attention to the extremely dangerous effects for international security and stability this policy regarding the INF treaty might bring about," Antonov said.