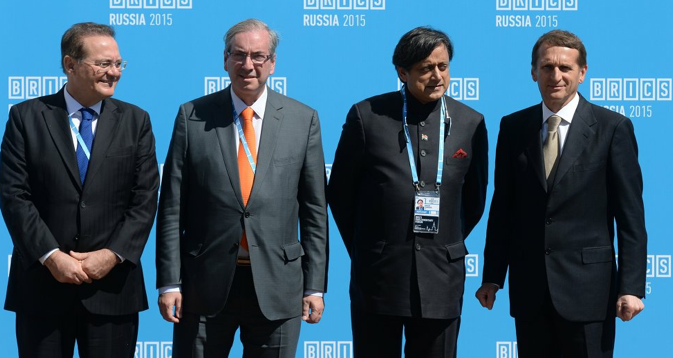 The first ever BRICS parliamentary forum, held in Moscow, concluded with the parliamentarians setting themselves ambitious goals; from reform of the UN and establishment of a common market to raising BRICS nations into leading positions globally. The regularly reiterated refrain was a comparison of the BRICS with the G-7, which met almost simultaneously, not too favourably for the latter.

While the association of Brazil, Russia, India and China (BRIC) has functioned since 2006, becoming BRICS with the addition of South Africa in 2011, parliamentarians from these countries have not congregated.

Within the BRICS framework, dialogue is based on mutual respect and the quest to find a balance of interests, participants at the forum emphasized.

It was in this context of inter-governmental cooperation within the framework of an equal association that BRICS was compared to the G-7, on several occasions.

"The meeting in Bavaria is taking place practically behind closed doors, in secret, and our meeting is taking place in the open,” Naryshkin observed, also referring to the thousands of protestors against the G-7 summiteers. “We have nothing to be embarrassed about, nothing to hide, we have an open and positive agenda, " he said.

The BRICS countries, he said, were not seeking solutions to their own problems to the detriment of others. He also underlined that BRICS as a group is not tied by the strict rules of party discipline, unlike other international organizations.

His colleague from the Federation Council Valentina Matvienko spoke in the same vein. It is no accident that not everybody appreciates the strengthening cooperation and increasing prestige of BRICS, Matvienko noted.

"We are faced by attempts from certain forces which are speaking out in favour of a uni-polar world, for hegemony and to counteract our cooperation,” she said. “BRICS is not aimed against anyone and acts in the interests of our countries and our people, in the interests of international peace and security ".

One of these “interests,” actively discussed in the forum, was the need for complete reform of the United Nations, including the Security Council. The five nations decided on a common position on this issue, outlined in outcome document from the meeting.

The parliamentarians said UN reform was necessary because the world body’s activities did not reflect the true balance of power in the world.

The head of the Brazilian Senate emphasized this aspect, while a representative from the Indian parliament said that “the inability of international structures to protect peace and security” had become clear. "The model for managing peace needs urgent reforms because no country can respond in isolation to all of the challenges of the age ", the Indian member of Parliament said.

Naryshkin said the arbitrary interpretation of the UN Charter was to the advantage of those who were attempting to gain a monopoly on the decision-making process and subjugate economic cooperation to the interests of political expediency. He cited, as examples, the UN resolutions on Kosovo and Libya and now the resolution in support of the Minsk Agreement on Ukraine.

Sergei Ryabkov, Deputy Minister of Foreign Affairs, said Moscow understood the need for UN Security Council reforms but did not want to place an artificial deadline on the event. “An unsubstantiated limit to the completion of such a reform we consider to be unproductive,” the diplomat said.

There was discussion at the forum about strengthening economic cooperation between the BRICS countries. Zhang Dejiang, head of the Standing Committee of the Chinese National People’s Congress spoke on the issue saying, “We must strive to ensure that in trade and economic cooperation we move toward the creation of a single market, creating infrastructural projects." The key to such collaboration was the BRICS development bank and the pool of nominal currencies of the participating countries.

According to Alexey Pushkov, head of the Duma’s International Committee, the economic centre of the world is changing, and this is proven by the expansion of cooperation within BRICS. “The West will have to at least share its influence and authority on the global arena with the countries that are represented in this organization,” he told the parliamentarians. Comparing the rate of economic growth, he said the combined GDP of the BRICS countries in the next two or three years would exceed that of the G-7.