Moscow concerned over US medico-biological labs placement at Russian borders 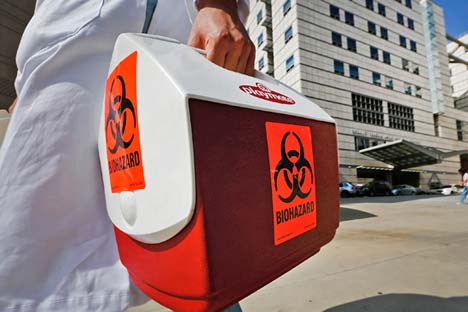 Foreign Ministry: The Pentagon is trying to deploy similar camouflaged military medico-biological facilities also in other countries of the Commonwealth of Independent States (CIS). Source: AP

The Foreign Ministry said the "Richard G. Lugar Public Health Research Centre" in Georgia is a medical research division of the US Army.

Moscow is deeply concerned over the Pentagon’s activity to place its medico-biological laboratories near Russian borders, Russian Foreign Ministry said in a statement on Thursday.

"We regret to state that the United States, instead of making a constructive contribution to the world community’s efforts aimed at strengthening the Convention on the Prohibition of the Development, Production and Stockpiling of Bacteriological (Biological) and Toxin Weapons and on their Destruction, has long chosen the tactics of the spread of provocative conjectures and insinuations against other states on the issues related to the specified Convention," the ministry said in connection with the US State Department’s 2015 Report on Adherence to and Compliance With Arms Control, Nonproliferation, and Disarmament Agreements and Commitments.

The so-called "Richard G. Lugar Public Health Research Centre" in a suburb of Georgia’s capital Tbilisi, which is a high-level biosafety containment laboratory, is the most telling in this sense. "It has long been sheltering a medical research division of the US Ground Forces, which is a branch of the Walter Reed Army Institute of Research (WRAIR)," the Russian Foreign Ministry said in a commentary.

Russia has disposed of over 75 percent chemical weapons stockpiles

"The American and Georgian authorities have made efforts to conceal the true content and direction of activities of this military unit of the US Army, engaged in the study of particularly dangerous infectious diseases," the ministry said. "The Pentagon is trying to deploy similar camouflaged military medico-biological facilities also in other countries of the Commonwealth of Independent States (CIS)."

"This Pentagon’s activity in the spheres directly related to the Biological and Toxin Weapons Convention (BWC) is conducted against the background of obvious disinterest of the US administration in the strengthening of this Convention as a collective security instrument," the ministry said. "It is known that the United States in 2001 unilaterally disrupted multilateral negotiations in Geneva aimed at working out the BWC verification mechanism and since then has been obstructing their resumption in every possible way." "Decades of the international community’s efforts to strengthen the Convention have been wasted."