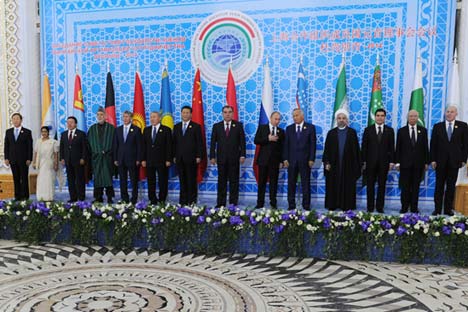 Moscow believes that the SCO could become a platform for developing linkages between EAEC and SREB. Source: EPA

The Russian chairmanship of the Shanghai Cooperation Organization (SCO) will culminate in the Ufa Summit, which has two crucial issues on the agenda; to decide whether to accept new members into the SCO, and how best to counter the wave of religious extremism which threatens to tighten its grip over Afghanistan and countries of Central Asia.

The Russian chairmanship of the Shanghai Cooperation Organization (SCO) has entered its final weeks and will culminate in the summit in Ufa on July 9 and 10. The summit will have to decide whether to accept new members into the SCO, and also tackle how best to counter the wave of religious extremism which threatens to strengthen its grip over Afghanistan and countries of Central Asia. But the most interesting aspect of the summit will be the interaction of the two regional heavyweights, Russia and China, within the SCO framework.

Adoption of the Strategy of Development of the SCO to 2025 and beginning of the accession process of two new member countries, India and Pakistan, are expected to be the two milestone events of the forthcoming summit. The details of the Development Strategy have not yet been unveiled, but Russian diplomats state that the SCO has no plans to become a military-political bloc.

"There is no military aspect to the SCO, neither collective power. There is already a CSTO for these needs," representatives of the Russian Foreign Ministry said.

According to the diplomats, priority is given to major economic projects, "Large-scale infrastructure and technological projects are the priority. Eurasian Economic Union (EAEC) and the Silk Road Economic Belt (SREB) are among such projects and there are ideas about fund development, on the Development Bank,” diplomats stated.

The issue that has become particularly relevant is the integration of EAEC and SREB. Moscow believes that the SCO could become a platform for developing linkages between these two mega-projects, like a consultative mechanism within the SCO platform.

Two heavyweights on the same field

There is speculation about how the interaction between the two leading members, Russia and China, will play out, with observers fearing competition and talk rife about two “bears" caught in a den.

However, Bakhtiyor Khakimov, special representative of the Russian President for SCO does not think there will be any such issue. “Not two bears, but two people who are getting along well and helping each other,” Khakimov said.

Russia and China are working hard to avoid any areas of conflict between the EAEC and the SREB: “I personally took part in negotiations. Concrete issues are already being discussed," he said.

There is hope that all disputes will be resolved. “Appropriate instructions and directives have been given. There are government orders in this regard. Discussion is underway. The contacts between the EAEC and the PRC have been established. The Chinese hope that the EAEC format will move forward, while the comprehensive Russian-Chinese contacts will be preserved,” Khakimovsaid in an interview to RIR.

Frequent talks on the alignment of legal systems of the two countries confirm how seriously Russia and China are working to ensure convergence of their intended goals. Vasily Likhachev, Coordinator of the Parliamentary Group for Relations with the Chinese Parliament, told RIR, that "SREB involves linking up with the EAEC and the issues of harmonization of legislation should be addressed.”

According to Likhachev, the Moscow-Beijing duet could become a central element not only within the SCO but also within BRICS. “We need to combine the potential of Russia and China. Our cooperation will play a special role in the framework of the SCO and BRICS,” Likhachev said.

ISIS is the major threat

Despite the importance of economic issues, security issues will be high on the SCO summit agenda, as members, especially the Central Asian countries, are facing the threat of the "Islamic  State" (IS).

At the conference on"Security and stability in the SCO region", held in Moscow on June 4, Russian Foreign Minister Sergei Lavrov made it clear that the IS is more dangerous than "al-Qaeda" and Russia is concerned about emergence of units of this organization in Afghanistan, which is close to the borders of the Central Asia.

Lavrov proposed to work in two directions; first, to assist the “restoration of peace and stability in Afghanistan,” and second, "to continue developing rapid exchange of information between the competent authorities" involving, among others, countries with observer status. This cooperation would help to prevent attempts to involve citizens in the radical movements, to identify potential terrorists and militants returning after having participated in armed conflicts.

SCO and BRICS at the round table

The SCO summit in Ufa will be held almost simultaneously with the BRICS summit. A joint meeting of leaders of the SCO, BRICS (Brazil, Russia, India, China and South Africa) and the EAEC has been scheduled. As Khakimov explained, "it will be a meeting in the format of a free discussion where all the participants will be able to discuss all the issues."

However, he stressed that the agenda for the two summits do not overlap. “BRICS deals with global issues. The forum is primarily involved in economic questions. The SCO is a multipurpose organization that covers many areas - economics, politics, security, and so on,” Khakimov said.