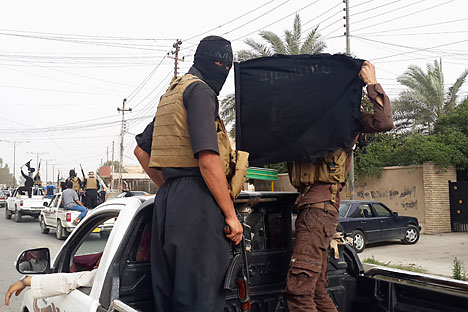 ISIS fighters celebrate on vehicles taken from Iraqi security forces, on a street in the Iraqi city of Mosul, June 12, 2014. Source: Reuters

Emphasis on dialogue for mutual coexistence has emerged as a core policy, not a contingent concern, for Russia. It emerges from the very composition of Russian society, and the commitment of Russia’s leadership to promote pluralism and dialogue.

“Russia is united with the Islamic world and would help Muslim nations resolve their political crises,” he said.

Russian President Vladimir Putin’s statement to the Group emphasized cooperation with the Islamic world towards “promoting dialogue between cultures, and supporting a variety of development paths and civilizational models”. Putin’s statement pointed out how “Russia’s history serves as a good example of harmonious coexistence of different (religious) denominations, first of all of Christianity and Islam”.

Emphasis on dialogue for mutual coexistence has emerged as a core policy, not a contingent concern, for Russia. It emerges from the very composition of Russian society, and the commitment of Russia’s leadership to promote pluralism and dialogue. Christianity, Islam and Buddhism are three major religions the Russian people practice.

The communist era emphasis on a secular polity loosened in the post-Soviet period as communities vigorously asserted religious identities. This religion-based assertion turned violent in Russia’s south, with some of its regions declaring separation on the basis of religious identity.

Violent religious extremism in the North Caucasus and the support it got from international terrorist networks like Al Qaeda created havoc during the transition years of post-Soviet Russia. In December 2003 I escaped a bomb blast in Moscow near the Institute of Asian and African Studies, to which I was affiliated, but six students fell victim to the blast. Whether the Nord-Ost theater siege in 2002, or the Beslan tragedy in 2004, memories of terrorist violence have played a role in shaping the Russian policy discourse.

Russia’s concern against the rise and spread of religious extremism in different parts of the world emanates from its policy to ensure a multicultural and pluralistic world where freedom of religion is not compromised. Recent developments like the rise and spread of Islamic State (IS) and its war in Iraq or Syria, or the war in Yemen, or the resurgence of Taliban in Afghanistan has created concerns in Russia and other pluralistic countries like India.

President Putin has taken a calibrated approach to fight extremism and terrorism, and his policies have combined both hard and soft methods. He handled hardliners like (Shamil) Basayev and (Aslan) Maskhadov in Chechnya with an iron hand and simultaneously initiated economic development in the North Caucasus. Under Putin’s leadership, Russia joined the Organization of Islamic Cooperation (OIC), an important body of Islamic countries, as an Observer in 2005 to meaningfully engage with the Islamic world.

During my visit to Moscow in 2010, I witnessed a being mosque being built in the Prospect Mira on the facilities of an old mosque. As I visited the site of the construction, I saw Muslims from most parts of the former Soviet space congregating at the site, and offering prayers.

Putin has made the issue of fighting extremism and terrorism one of his major foreign policy planks since he first became President in 2000. During his visit to India in October 2000, when both the countries signed the historic Strategic Partnership agreement, Putin told the Indian Parliament, “the same individuals, same terrorist organizations, extremist organizations are organizing and, very often, the same individuals participate in organizing, in conducting and igniting terrorist acts from Philippines to Kosovo, including Kashmir, Afghanistan and Russia’s northern Caucasus”. This statement is as relevant today as it was 15 years ago.

The reports of disgruntled youth joining ranks of IS has caused increasing concern among pluralist states. A report suggests that there are about 1700 Russians fighting with IS. The recent case of Varvara Karaulova, the Moscow teenager arrested in Turkey while trying to cross border to join the IS is a case in point.

India has similar concerns. Last December, a 24-year old Muslim from Bangalore was arrested for running a pro-IS Twitter account. IS flags were displayed in Afghanistan and Kashmir. There is an increasing concern that radical organizations like Islamic Movement of Uzbekistan, Hizb ut-Tahrir and Jundullah may widen their networks across Eurasia with support from Taliban and IS and other radical groups.

There are various reasons why conflicts in West Asia have been dragged. Radical groups have challenged existing regimes, fought against each other and tried to capture power through undemocratic means. Another factor contributing to this protracted conflict, which has claimed thousands of lives, is that powers like Russia and the United States could not develop a common framework to address the crises.

The lack of coordination and lack of democratic structures created a vacuum and contributed to the rise of radicalism. Use of religion as a political tool too has created problems. Globalization, and spread of information and communication technology, has proved a doubled-edged weapon. It has contributed to global integration and to the idea of a global village, but it has also helped widen networks of religious extremism and brainwashing impressionable minds. This second dimension of modern technology has affected structures of pluralist states like Russia and India.

The role of Russia as a facilitator of dialogue in West Asia will increasingly rise to prominence. Russia’s emphasis on dialogue becomes significant.

Putin outlined Russia’s interest in coordinating “efforts in fighting against terrorism and looking for peaceful ways of settling regional conflicts”, and hoped “the activity of the strategic vision group will help assure values of religious tolerance and humanism all over the world”.