The strained economic situation in the Donbass 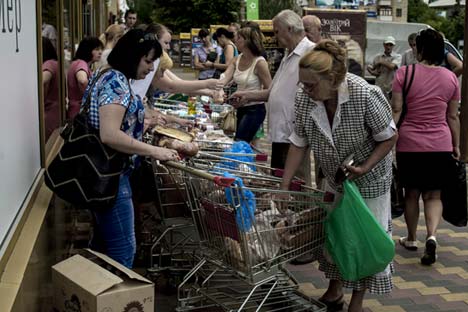 Neither of the two unrecognized republics has an officially approved state budget, and their funds are being allocated on a temporary basis. Source: RIA Novosti / Valeriy Melnikov

Since the start of hostilities in Eastern Ukraine, people of the two unrecognized republics, Donetsk and Lugansk People’s Republics, have decreased dramatically in numbers, by over two and a half times, banks have stopped working, and residents no longer receive their pensions or salaries. At the same time, some of the largest Ukrainian businesses continue to operate in these places, in exchange for humanitarian aid.

The onset of hostilities in Eastern Ukraine has seen the numbers of people living in the two unrecognized republics, Donetsk and Lugansk, decrease by around 250%, the Russian business newspaper RBC-Daily reported. According to the publication, between two and 2.5 million people now live in the militia-controlled Donbass region. Of these, around a million people are pensioners.

Neither of the two unrecognized republics has an officially approved state budget, and their funds are being allocated on a temporary basis, RBC learned from the Ministry of Taxes and Duties. The Republics require at least 55.2 billion rubles ($947 million) annually just to pay pensions and social benefits, but their governments do not have these funds.

The lives of people

One pensioner, an employee of a museum in Donetsk, has not been receiving any salary from Ukraine or from the DPR since August 2014. The last Ukrainian pension payment was made to her account in October, but she could not withdraw this money, as most ATMs no longer operate.

The reason for this is that in November, Ukraine declared an economic and transport blockade of the territories. This pensioner eats her morning breakfast in a social canteen, which a local Donetsk hotel owner opened for distressed residents of neighbouring residential buildings. In the evening, she cooks her meals at home, using products she receives each week from the humanitarian Pomozhem (Help) Fund, sponsored by businessman Rinat Akhmetov.

In Donetsk, public sector wages have been paid only once; at the end of October 2014, before the election of representatives to the People’s Council of the DPR, while doctors and teachers last received their September salaries. Nobody knows when the next payments will be made.

Starting from November 2014, all ATMs and online merchant information system in stores have stopped working in the DPR and LPR. Nevertheless, many residents continue to receive wages onto their accounts, including employees of the System Capital Management Group (SCM Group), owned by the Akhmetov, the richest Ukrainian businessman (in 201st place on the list of the richest people in the world according to Forbes, net worth: $6.7 billion).

The SCM Group employs more than 70,000 people in its various enterprises located in the Donetsk and Lugansk Oblasts. Akhmetov’s SCM Group is the largest owner of enterprises on the territory currently under the control of DPR and LPR. In the Donbass, he owns dozens of different assets; from steel plants to pharmacy kiosks. Despite the transport blockade, the SCM manages to find ways to supply its factories with raw materials and export finished products to Ukraine.

At the same time, however, most big businessmen have limited themselves when it comes to the issuance of staff salaries and humanitarian assistance.

Almost all large enterprises in the Lugansk Republic have stopped operations. The Alchevsky Steel Mill and Coke Plant, the most modern in Eastern Europe, was shut down in August 2014.

The largest enterprise in the capital city of the LPR, the Luganskteplovoz (Lugansk Locomotive Works) stopped working in February 2015, because of difficulties in getting engines from Germany and the United States.

At the beginning of 2015, authorities in the DPR and LPR said that there was insufficient Ukrainian hryvnia currency available in the region, and therefore, they were forced to create a multi-currency zone in which, together with the Ukrainian currency, people could use Russian rubles, American dollars, and Euros. These currencies could be used to pay for products in stores, make tax payments, as well as to pay wages and pensions.

The taxation system of the republics is very simple.

In the LPR, businesses pay taxes at a rate of 3 to 8% of their total turnover, depending on the type of activity. In the DPR, businesses can choose one of two options for paying taxes; either 20% of net income or 2% of total turnover. The income tax rates for citizens in both republics have been set at the Russian level, at 13%. To carry out business activity, individual enterprise owners purchase licenses at a fixed rate.