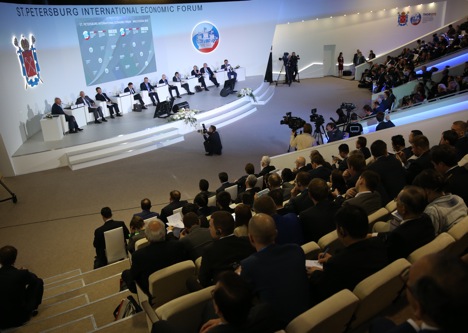 In the run-up to the BRICS summit, scheduled to be held at Ufa in July, the BRICS Business Forum, comprising leading business associations of the five member countries, met for the first time ever at the St. Petersburg International Economic Fair. Among the ideas to emerge was a roadmap for enhanced partnerships in the economic sphere.

The BRICS Business Forum met for the first time as part of the 19th St. Petersburg International Economic Forum (SPIEF), in the run-up to the BRICS Summit that will take place in Ufa next month. Chaired by Sergei Katyrin, president of the Russian Chamber of Commerce and Industry, the session saw an exciting discussion on the future of BRICS as a political and economic platform, given the bloc’s rising share in the world economy.

Alexey Likhachev, Russia's first Deputy Minister for Economic Development, said the countries had jointly developed a partnership strategy that may be approved at next year’s BRICS summit under India's presidency.

"An economic partnership roadmap is a collective document in which all countries have expressed their interest, identified areas of cooperation that will become our development priorities, and set certain growth targets for economic cooperation," he said. Russia’s roadmap includes 50 projects that may be implemented on a multilateral basis.

Likhachev also noted that Brazil, Russia, India, China and South Africa are actively involved in “outreach cooperation;” or interaction with such blocs as Shanghai Cooperation Organization (SCO) and Eurasian Economic Union (EEU). Increasing and diversifying trade cooperation between BRICS members and non-member countries is one of the priorities of the group, he added.

Addressing the forum, Didar Singh, Secretary General of the Federation of Indian Chambers of Commerce and Industry (FICCI), said BRICS is not only an important forum for India and its partners but reflects the potential of the future. He outlined certain focus areas for the bloc, including easing visa procedures for member countries, drafting investment guidelines and creating common and integrated trade platforms for BRICS countries.

“BRICS is a very attractive organisation for China. Our business leaders have high hopes for cooperation within BRICS since our countries share a huge common market,” Yu said.

The First Inter-regional Forum of Small and Mid-Sized Businesses of the SCO and BRICS will be held at Ufa in October, 2015. The countries have agreed to create a BRICS regional Council. All institutions created within BRICS will aim to remove existing administrative barriers, including customs, registration, certification and technical regulation, insurance, visa regulations and other issues.

BRICS used to be an acronym before 2008, but it has since become a platform for increasingly active cooperation as well as a political reality, said Paulo Nogueira Batista, Brazilian economist and IMF Executive Director.

“Our countries were not entirely satisfied with the existing international financial architecture. As a result, they started creating new institutions, leading to an agreement to establish the BRICS New Development Bank (NDB) and the Contingent Reserve Arrangement (CRA)”, he said.

Batista noted that by creating these new financial institutions, BRICS has achieved a new level of cooperation. The NDB and CRA, a $100-billion reserve currency pool, in his opinion, will naturally cooperate with the existing international organizations rather than compete with them. The need to create such institutions reflects the fact that BRICS economies were not adequately represented in the global financial system. The NDB is open for membership of non-BRICS members. Russia has already invited Greece to become a member of the New Development Bank.

The agreement on the NDB was signed at the 6th BRICS Summit in Brazil in July 2014. It will be headquartered in Shanghai and will fund major infrastructure projects in developing nations. According to Russian Deputy Finance Minister Sergei Storchak, the BRICS NDB will be launched at the first session of its Board of Governors in Moscow on 7 July, just ahead of the Ufa Summit.

Russian Finance Minister Anton Siluanov will be the first chairman of the Bank's Board of Governors while the prominent Indian banker K V Kamath will be its first president, for a five year term.

“It is important to see this bank as first official instrument of BRICS. For example, it could have contributed to solving the problem of settlements in national currencies within BRICS bloc. This bank will have a strong professional team of economists who would be able to push such decisions,” he said adding that NDB should also cooperate with business and understand its interests.

The question of settlements in local currencies has been discussed by BRICS leaders for a while and bloc members like Russia and China have begun using this facility.

Oleg Sienko, CEO of JSC Research and Production Corporation Uralvagonzavod, believes NDB should move away from settlements in US currency.

"The share capital of the new bank is fixed in US dollars. BRICS countries should get off this needle someday, we should protect our resources and our currency reserves, establish true value for our work, and be independent in cooperation with each other without depending on the dollar”, he said.  To achieve good results in developing their economies, BRICS should move towards settlement in such currencies that allow them to move goods and raw materials freely within the bloc.