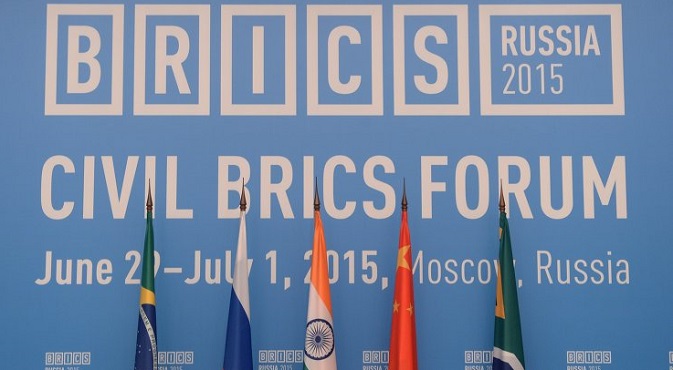 BRICS Civil Forum could be seen as a natural continuation and enhancement of the work of experts and researchers from member countries. Source: BRICS2015.ru

The Civil BRICS Forum opened its doors for over 500 delegates from Brazil, Russia, India, China and South Africa at Moscow’s President Hotel. The delegates prepared a list of recommendations for BRICS leaders on critical issues from sustainable development and efficient economic cooperation to poverty elimination and healthcare.

The meeting of the BRICS Civil Forum in Moscow, between June 29 and July1, was conducted for the first time in the history of BRICS. It aims to ensure efficient dialogue between representatives of civil society of BRICS member states with decision-makers in areas such as healthcare, education, culture, development and urban problems, finance among others.

Academics, researchers and members of the media from the five BRICS countries gathered in Russia’s capital to discuss issues in healthcare, education and science, culture, sustainable development, economics and trade, peace and security and inter-ethnic affairs. Seven working groups set up to discuss these issues have come up with a set of recommendations for BRICS leaders that will be passed on to the official delegations of each country at BRICS Summit in Ufa next week.

“We have all required instruments to deliver our findings and observations to the leaders of BRICS,” said Elena Topoleva-Soldunova, Director of Agency of social information and member of the Public Chamber of Russia and Council of Human Rights. “For example, in the area of economy and trade, the delegates of Civil forum believe that BRICS countries should create their own vision for future economic development based on research done by our experts and economists”.

Addressing delegates at the Forum Alexander Tokovinin, Director of the Foreign Policy Planning Department, Russian Ministry of Foreign Affairs, noted that Civil BRICS was a new platform launched during Russia’s presidency of BRICS.

“We see BRICS as a platform that not only reflects new realities of the changing world, but also helps pushing forward new trends,” he said. “BRICS was created not as per the will of any state but as result of concurrence of interests of our nations”.

Vyacheslav Nikonov, chairman of the education committee of the Russian State Duma and Chairman of the Board of the National Committee on BRICS Research (NCR BRICS) pointed out that BRICS today is not only one fourth of global GDP and 44 per cent of world’s population but a centre of global attraction and “the instrument of historical injustice restoration”.

“BRICS is a growing organization, but many promise it crisis and decline, not only in the West but within the grouping. They don’t see prospects for BRICS, either because the countries are too different or because they are again the West,” Nikonov said. “But BRICS is not a union against anything, it’s a union for. And we will not stop our development”.

Nikonov noted that BRICS Civil Forum could be seen as a natural continuation and enhancement of the work of experts and researchers from member countries. Inclusion of different civil society groups and stakeholders in strenuous efforts to discuss a wide range of issues, he added, would further deepen cooperation and help specify ideas for BRICS leaders, and will lead to greater understanding of the common concerns and aspiration of people of the five nations, Brazil, Russia, India, China and South Africa.

Delegates of BRICS Civil Forum aim to analyze the diverse civil societies of member counties and the ways it interacts with governments of these countries.

“It is very interesting that BRICS countries find it important and relevant to engage in different ways, including with civil society organizations,” said Monica Herz, senior researcher, BRICS Policy Centre Coordinator Global South Unit for Mediation. “We need to understand civil society in diversity, different historical movements and also in terms of its relationship with the state”.

Samir Saran, Vice President, Observer Research Foundation believes that despite a common western belief that BRICS civil societies should resemble western ones, the civil societies are not similar.

Discussing economic development of BRICS countries and their impact on the global economic system, the forum delegates stressed the need to include questions of sustainable development and “green growth” in the larger economic discussion. Matching rapid economic growth with sustainable development, issues of social and economic inequality and promotion of social entrepreneurship as instrument of overcoming these are among key areas of discussion at the Civil Forum.

Srinivas Krishnaswamy, CEO at the Delhi-based Vasudha Foundation, sees the new trends in BRICS economic cooperation, including creation of new financial institutions, the New Development bank and currency reserve, in the light of a new World Bank Energy Strategy which restricted funding of coal projects for developing economies. This was opposed by India, South Africa and other countries dependent on coal to satisfy their energy requirement.

“I believe the New Development Bank will try to advance resources to countries, especially in Africa, in such areas where the World Bank is a little reluctant now,” he said, adding that infrastructure projects, including water, power and dam projects, mining infrastructure, are going to be the key focus of the bank, though the environment-conscious civil society of BRICS may differ. Apart from economic and trade issues, strengthening the role of civic society, cooperation in healthcare, with focus on health programmes minimizing negative impact of globalization and growth of public health, cooperation in harmonization of inter-ethnic relations and expanding dialogue on peace and security are among key areas of discussion at the BRICS Civil Forum.