Few reasons for Russia to stay in PACE 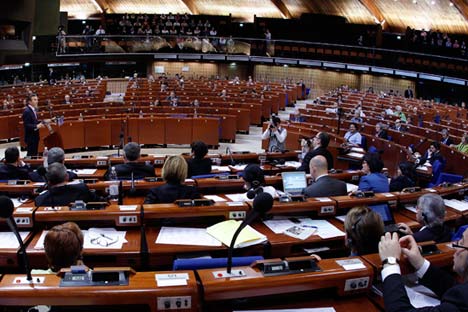 Russia itself is thinking of leaving PACE. Source: Reuters

The Parliamentary Assembly of the Council of Europe (PACE) has adopted a resolution accusing Russia of aggression against Ukraine. Analysts believe the document has no practical use but it strengthens those Russian politicians who advocate Moscow’s exit from PACE.

A resolution recently adopted by the Parliamentary Assembly of the Council of Europe (PACE) has provoked furious reactions from Russian politicians and officials. The resolution of June 25, dedicated to those who have gone missing during the Ukraine conflict, names Moscow as the aggressor while referring to Crimea an occupied territory. The legislators called for Russia to “release all who have been illegally detained in the territory of Ukraine,” to investigate “the forced kidnappings, tortures, and politically motivated killings of Ukrainian activists and members of the Crimean-Tatar community,” and to implement the Minsk agreements. The documents also asks Russia “to reverse the illegal annexation of Crimea,” “to withdraw all of its troops from the territory of Ukraine,” and to release the Ukrainian citizen Nadezhda Savchenko. Only then would the Russian delegation’s vote be restored in PACE.

Russian politicians did not see anything sensational in this resolution. “The PACE resolution basically confirms that negative status quo that came into being between the Assembly and Russia after sanctions were imposed on the Russian delegation at PACE’s January session,” said Alexey Pushkov, State Duma Chairman for International Affairs. Moscow intends to ignore the resolution.

“We are interested in continuation of cooperation with PACE, but under equal conditions. We are not prepared to cooperate under conditions that are discriminatory,” said Valentina Matviyenko, Federation Council Speaker.

“PACE’s aggressive declarations about Russia are being heard not because there are some kind of other Europeans sitting there, but because their real responsibility and participation in decision-making are miniscule. That is why there is no necessity of using rhetoric that is in accordance with practical interests,” explains Dmitry Ofitserov-Belsky, docent at the Higher School of Economics.

Approaching point of no return

Having deprived Russia of its right to vote in the Assembly, PACE had exhausted nearly all instruments to pressurize Moscow. In theory, the deputies can go further and initiate Russia’s expulsion from the Council of Europe, but they are not planning to do so. The official reason, PACE President Ann Brasseur said, was that ordinary Russians would be the ones to suffer. (Russians would no longer be under the protection of the European Convention, which regulates fundamental human rights and freedoms.) Unofficially, however, since Russia is one of the six main sponsors of PACE, providing 10% of its budget, the proposition is difficult. Also, excluding Russia would, according to analysts, deprive PACE of its pan-European status.

Meanwhile, Russia itself is thinking of leaving PACE. Politicians say this is possible if, at the next vote on the powers of the Russian delegation (due to take place in early 2016), the restrictions are extended.

Proponents of Russia’s exit argue that Moscow’s participation in the Council of Europe and PACE carries no benefits.

“The membership of Russia in the Council of Europe and in the Parliamentary Assembly of this institute is an atavism from the Yeltsin era. After decades of confrontation and the collapse of the USSR, the inferiority complex of the Russian leadership forced Moscow to seek membership in every possible international organization. This was just to demonstrate its unity with the West,” said Alexander Domrin, a professor at the NRU HSE Faculty of Law.

Even the moratorium on the death penalty, which Russia had to accept in order to join the Council of Europe, brought Russia nothing good, Domrin said. He proposes that relations with the EU countries should be built on a bilateral basis.

Ofitserov-Belsky does not agree. “This would be a point of no return in Russia-Europe relations. It is not every day that one can enter various organizations, or exit from them. Neither Russia nor Europe stands to benefit from such a turn of events, but someone over the sea will be very glad,” he explained