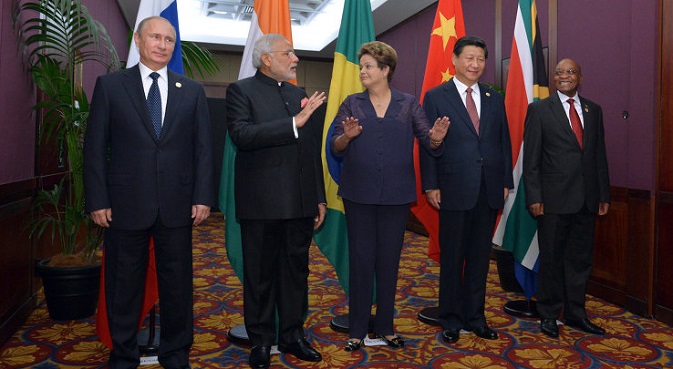 There are several shared interests that bring the BRICS economies together. Source: BRICS2015.ru

Since Russia assumed the Presidency of BRICS from Brazil on April 1, 2015, India has been working in close collaboration with its strategic partner to ensure that the group’s (seventh) summit at Ufa this month and the year of the Russian presidency is a fruitful one, with positive outcomes. Among documents to be adopted is a detailed Vision statement on a new economic strategy to energise intra-BRICS trade and economic ties.

The Russian presidency of the Brazil, Russia, India, China, South Africa (BRICS) has had a special significance in the evolution of the group.

Russia hosted the first formal BRIC summit, in Yekaterinburg, in June 2009. South Africa was then not part of the group. Prior to its first tenure in the rotating presidency of BRICS, Russia hosted the first meeting of BRIC High Representatives on National Security (National Security Advisors-NSAs) in March 2009, steering the loose grouping of four potential economic powerhouses towards a composite bloc. The idea was to create another pole in the multi-polar world envisaged by the four countries.

Russia has since pushed to pursue the security component to the BRICS dialogue table, actively supported by India. As the crisis in West Asia with the rapid spread of the Islamic State deepens, threatening to move dangerously close, in Afghanistan, both Russia and India, which have faced the ravages of terrorist attacks, have worked to give BRICS an important voice on critical global flashpoints. At one stage, when confrontation between the West and Iran threatened to spiral into a full-fledged conflict, feelers were sent to BRICS leaders to step in and ease tensions.

BRICS constitutes an important voice in international politics, with regional and global issues forming an important part of the summit agenda. At Ufa, on 8th and 9th July, BRICS leaders will consult and try to synergise their views on the situation in West Asia (Syria and Yemen, in particular), ISIS and the deepening problem of instability in Afghanistan, said a senior Russian diplomat.

“Today, when we speak about changing global order, one can’t but admit that cooperation in BRICS is one of the pillars of the Russian-Indian special and privileged strategic partnership,” said Sergey Karmalito, senior Counsellor at the Russian Embassy.

An Indian diplomat concurred, saying, “the way we work in BRICS is almost an extension of our warm bilateral relations.”

Appreciating India’s “continuing support of the Russian initiatives in BRICS,” Karmalito said, “The long-term objective of the Russian Federation in BRICS and a cross-cutting task of our Presidency is aimed at gradual transformation of BRICS from a dialogue forum into a full-scale mechanism for strategic and day-to-day interaction on key political, economic and social issues.”

Outlining the priorities of the Russian Presidency of BRICS in 2015-2016, he said, “ We intend to strengthen positions of BRICS on the international arena; to promote solutions to most pressing international political issues; to expand external relations; to achieve tangible progress in reforming the international monetary and financial system, primarily the IMF; to develop multilateral financial cooperation within the BRICS, including a full-fledged launching of the New Development Bank and the Contingent Reserve Arrangement.”

A Common Economic Strategy is being finalised in Moscow to bring about a user-friendly and easily accessible trade framework for boosting intra-BRICS trade, said Sujata Mehta, Secretary (Economic Relations & DPA) in India’s Ministry of External Affairs. Mehta said Russia was very supportive of the Indian initiative to set up the New Development Bank.

“There are several shared interests that bring the BRICS economies together,” said Mehta. “One of the major agenda of the grouping is to reform the global governance architecture which is yet to reflect the changing global picture, where the emerging economies are playing a larger role,” she said.

This document will provide a “comprehensive framework for cooperation in trade and economic affairs,” a senior Indian official said. “Russia was very keen to get this framework document in place, and we have worked to ensure that it happens,” the official said. The almost 30 page document, in the nature of a Vision statement, deals with issues ranging from trade facilitation, cooperation between small and medium-scale industries, to cooperation in agriculture, best practices, telecommunications, energy security, tourism and Science and Technology.

“The BRICS economies present huge opportunities for collaboration which can take economic growth and development to the next level in all our countries,” said Mehta. “The synergies and complementarities between the economies underscore opportunities for collaborating across a wide range of areas from agriculture to infrastructure to energy and financial markets,” she said.

Closer interaction between parliamentarians of BRICS countries is another area Moscow keenly seeks to promote, with active support from India, the world’s largest democracy. The first BRICS Parliamentary forum held in Moscow in May was successful, and the aim is now to foster synergies among the legislators, so that legislative processes in the five countries can find commonality.

“Closer interaction and cooperation among youth of our countries,” is another desired objective, Karmalito said.

The summiteers will sign a Memorandum of Understanding on culture, highlighting promotion of linkages between youth of the five countries, a foreign ministry official said.

The third item to be adopted is an agreement on a joint BRICS web portal. To be jointly managed, this would comprise of comprehensive details about agreements, events and BRICS activities in all five countries, and provide an outline of opportunities that exist for cooperation.