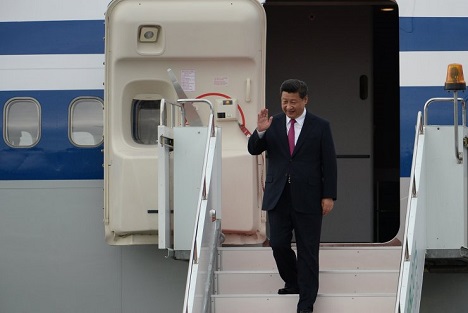 President of the People’s Republic of China Xi Jinping arrives for the BRICS and SCO summits at Ufa International Airport. Source: BRICS2015.ru

After fruitful discussions with the Indian PM at Fortaleza, last year, Chinese leader Xi Jinping invited India to join the APEC summit to enhance bilateral partnership and engagement. Sino-India talks on the sidelines of the BRICS summit at Ufa promise to be equally productive and rewarding.

The BRICS and SCO summits provide opportunities not only for multi-lateral discussions but offer an additional platform for bilateral talks as well.

Relations between India and China, though making steady progress, are still hostage to serious problems that plague bilateral ties. More summits between the two countries can help resolve issues through greater understanding of each others position.

India and China had productive discussions on the sidelines of the 6th BRICS summit at Fortaleza, Brazil. The upcoming BRICS forum at Ufa promises to have yet another productive meeting between the leaders of the two nations.

Indian Prime Minister Narendra Modi and Chinese President Xi Jinping are likely to meet on the sidelines of BRICS summit at Ufa, scheduled 9th July, 2015. The world watches when Indian and Chinese leaders meet, Xi said in one of his statements.

The issue of  China putting a ‘technical hold’ on India’s move in the United Nations to question  Pakistan on the release of 26/11 terror mastermind Zaki-ur- Rehman Lakhvi is likely to be on the agenda of talks between the two leaders at Ufa.

The sanctions regime on ‘Al Qaeda and associated individuals and entities’ was established by the UN Security Council (UNSC) Resolution 1267 on 15 October, 1999.

Since the 1267 committee officially takes decisions by consensus, UNSC members can exercise their veto by placing a proposal on “technical hold,” which delays the case for three months before it can come back before the committee. The Indian government had taken up the issue of violation of the 1267 sanctions regime in Lakhvi’s case, and was blocked by China.

India has conveyed its concerns on the issue to the chair of the 1267 Committee and raised it bilaterally with other Committee members. India has taken up the issue with China at the highest level.

China opted for a “technical hold” arguing that India had not provided sufficient information.

Lakhvi was released from Adiala prison on April 10, 2015, after the Lahore High Court dismissed his detention order. India has demanded a probe into who had paid or stood guarantee for Lakhvi’s bail, as he is on the sanctions list.

China has proposed a discussion on the issue with India through the joint mechanism on counter –terrorism.

Apart from the Lakhvi case, China had earlier put a technical hold on India’s demand for the UNSC to take action against Hizbul Mujahiddin Chief Syed Salahuddin and Lashkar-e-Taiba leader Hafiz Sayeed.

A senior Chinese official, responding to Indian concerns, said China and India are opposed to terrorism in all forms, that the two countries are victims of terrorism and are working well to combat the menace.

When the meeting of the bilateral counter-terrorism mechanism is scheduled for second half of the year, leaders of both countries will exchange views on the issue at their meeting in Ufa.

Russia cannot be a mere spectator to India-China disputes

While India and China continue to improve ties, differences persist on thorny issues like the border, and the two countries are seeking a fair, mutually acceptable solution to the border issue.

On Prime Minister Modi’s call for clarification of the Line of Actual Control between them to avoid misunderstanding, China reiterated its position that both sides should avoid issues that could bring more complications.

After discussions at Fortaleza, last year, the Chinese leader invited India for the APEC summit as part of partnership and engagement. The discussions that continued for 80 minutes instead of the scheduled 40 minutes covered entire gamut of issues related to bilateral relations, regional and international issues and had caught global attention.

Sino-India talks on the sidelines of the BRICS summit at Ufa promise to be productive and rewarding.