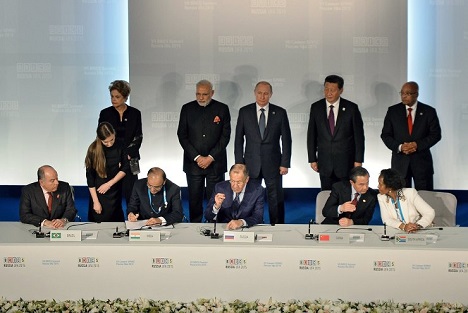 The BRICS summit at Ufa is over. Russian analysts have differing opinions on the outcome of the meeting between leaders from Brazil, Russia, India, China and South Africa. Some suggest that BRICS is moving from a G-7 like club towards a full-fledged organisation with clearly laid out goals, while others urge observers to wait and watch the future trajectory of the organisation.

The capital of Bashkir will return to normal after a few days in the intense spotlight, with the twin BRICS and SCO summits concluding.

Speaking at the end of the BRICS summit, Russian President Vladimir Putin said the participating leaders agreed to closely coordinate their positions on international political issues. The summit’s host said his colleagues had confirmed their readiness to actively promote reforms in the international financial system, and increase the role of developing countries in the IMF.

The significance of the recent summit for Russia is linked primarily with the fact that BRICS partners supported Moscow on the issue of sanctions, having discussed similar steps with the West, and also expressed their support for the Russian approach to regulating the conflict in Ukraine; seeking only political approaches in implementing the Minsk agreements.

Georgy Toloraya, director of the Russian National Committee for BRICS Research, emphasized that the summit demonstrated the solidarity of its participants in respect to their approaches to resolving other regional conflicts that seemed important to BRICS “as a forum for discussing security issues and determining perspectives for developing international policy.”

Will BRICS become a “full-fledged block”?

Analysts say that the main outcome of the summit was the actual launch of such financial mechanisms as the BRICS New Development Bank and the pool of foreign exchange reserves. According to Mikhail Delyagin, head of the Institute of globalization problems, these steps mark a new direction within the organization.

“Until recently BRICS was a club similar to the G7, but now, having established financial institutions similar to the IMF and the World Bank, it has taken a step towards becoming an organization”, Delyagin said.

Boris Kagarlitsky, director of the Institute for Globalization and Social Movements, observes that the summit in Ufa shows “relatively successful, but extremely slow movement forwards.” Speaking about the BRICS Development Bank, he observed that it will begin working when the bank will start to finance its first projects as early as next year.

President Putin outlined the time frame on July 9. The analyst suggests that the reason for such deliberation is the absence, among the organization’s members, of a definition for its character and goals. “In my opinion, not all parties have come to a final decision about what they want [from BRICS]: a full-fledged, effective bloc, or just a format for certain multilateral relations,” Kagarlitsky said. He said that potentially a powerful bloc could be established, fully capable of competing with the European Union.

Toloraya also highlighted the fact that the move towards establishing BRICS as an institutional organization was slow and careful. “Not all countries want to establish some types of umbrella agencies,” Toloraya said, noting that, at the same time, the formation of a virtual secretariat for the organization had been agreed upon at Ufa. He highlighted, in particular, that the very demonstration of solidarity among BRICS countries on important global issues in the current complex international environment in which Russia and China, particularly, find themselves is a remarkable achievement.

Marsel Salikhov, head of the Institute of Energy and Finance noted the significance of the launch of the BRICS Development Bank in the context of the continuing confrontation with the west, in an interview with RIR. According to him, while Russian companies have found themselves cut off from western capital, the appearance of an alternative source of financing should have a positive effect on the Russian economy. The analyst believes the Development Bank will become an important mechanism for attracting Chinese investment in the Russian economy. Chinese financial resources have been discussed a lot recently in Russia, but so far, the flow of investments from China has yet to be seen.

As President Putin stated on July 9, the bank will provide credit to large scale projects with transportation and energy infrastructure, and also industrial development. He said Russia, as the chair of BRICS, had proposed a road map for investment cooperation.

“We have carried out consultations with our business circles, and included in the road map is something in the order 50 projects and initiatives, including proposals for founding energy associations, establishing international research centres for energy technology, and also cooperation for the metallurgy industry”, the Russian president said.