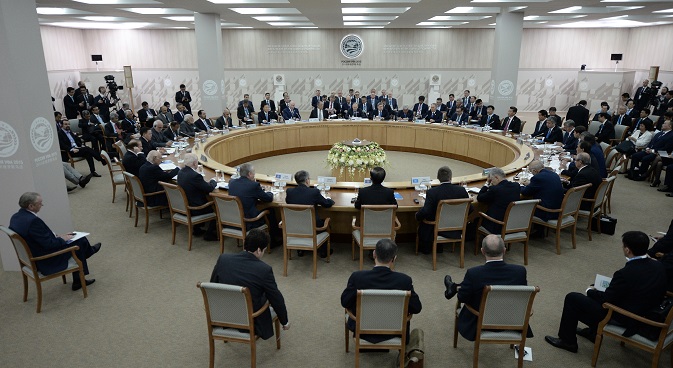 The former Soviet republics in the Shanghai Cooperation Organization share New Delhi’s concerns on the Taliban in Afghanistan.

The procedures for India and Pakistan to join the Shanghai Cooperation Organization (SCO) as full members will soon be initiated with the six existing members unanimously passing a resolution to the effect. Russia was the main backer of India’s full membership of the security grouping.

It is not exactly clear as to when the countries will become full members of the SCO, but sources close to the situation say that next year’s summit in Uzbekistan will see India and Pakistan participating as full members.

Membership of the SCO gives India major strategic inroads into Central Asia, a region that New Delhi has looked at stepping up engagement with from the 1990s.The only obstacle that India faced from joining the grouping as a full member was China’s initial reluctance. The entry of Pakistan to the SCO is seen by some analysts as China’s counterbalancing strategy. Nepal joins Sri Lanka as the second South Asian nation to have dialogue partner status.

Uzbekistan, Kyrgyzstan and Tajikistan all share India’s concerns on the threats posed by a potential return of the Taliban to power in Afghanistan. This is likely to lead to the grouping calling for harder measures and a joint policy to tackle the growing threat of the Taliban. A senior diplomat involved with India’s access to the SCO says, “Pakistan will find it increasingly difficult to continue to sponsor the Taliban and harbor visions of strategic depth in Afghanistan.”

The diplomat, who is not authorized to talk to the media, adds that the SCO would thwart efforts to further destabilize Afghanistan. A concern that Russia shares with India and the former Soviet republics is the booming drug trade in Afghanistan. “The opium is ‘exported’ to Russia and India, while the Taliban takes most of the profits,” the diplomat says.

Concerns about trans-national crime and terrorism dominate the SCO discourse.“Every country now is concerned about the developing threat from the international terrorism and extremism,” Uzbekistan’s President Islam Karimov said at a meeting with Vladimir Putin. Uzbekistan will take over the presidency of the SCO.

The SCO members approved a ten-year development strategy declaration. The document outlines the member states’ consolidated approaches to further development of the grouping and key international and regional issues.

India’s entry to the SCO is also likely to put an end to any talk about the grouping acting as a counterweight to NATO. Since Narendra Modi became India’s Prime Minister, he has been equally wooing partners from East and West. It is highly unlikely that India would be part of any organization that would look like it could be a part of a military confrontation with the West.

“India and China have a common interest that the SCO is not used as some sort of anti-West grouping,” says Doris Tung, a political analyst based in Hong Kong. “Both countries have much larger trade volumes with the US and EU than they do with Russia. They will not jeopardize this.”

Tung says the SCO, with four nuclear-armed countries, could be a formidable military bloc, but its main aim is to be a stabilizing force in a volatile part of the world. “China wants the SCO to promote its Silk Road Project, while India wants greater connectivity and access to Central Asia,” she says. “With stability in the region, the economic goals of both India and China can be met.”  She adds that India and China have complete synergy when it comes to the greater goals of the SCO.

Tung believes that Iran’s membership into the SCO would be on hold until it is able to reach a deal on its nuclear program with the international community.

Most analysts say that the scope of the SCO’s activities can only be understood after a detailed study of the grouping’s 10-year development strategy declaration.

Improved ties between India and Pakistan?

Before the SCO summit, Modi met his Pakistani counterpart Nawaz Sharif for a discussion that both sides claimed was constructive. The biggest takeaway for India was a commitment from Pakistan to expedite the 26/11 Mumbai attacks trial.

Russia and China maintain that the SCO can play a constructive role in improving India-Pakistan ties. “The SCO will play a constructive role in the continuous development and improvement of relations between India and Pakistan,” Chinese Foreign Ministry spokesperson Hua Chunyhing said.Russian Foreign Minister Sergey Lavrov said by joining the SCO, India and Pakistan would enjoy better relations.

The only other major multilateral forum where India and Pakistan are both members is the South Asian Association for Regional Cooperation (SAARC). Bilateral disputes between the largest countries in South Asia have led to many initiatives within SAARC being put on hold. Analysts say Pakistan is unlikely to block SCO proposals just to spite India. They remain divided on how much the SCO can help improve relations between the nuclear-armed neighbors.