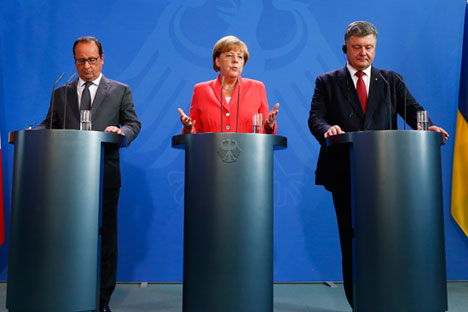 The European Union leadership is pushing Kiev to do more to fulfil terms of the Minsk peace deal on Ukraine signed in February, Russian analysts said, after talks between Ukrainian President Petro Poroshenko and the leaders of Germany and France on August 24.

The tenor of the press conference which followed the talks in Berlin between German Chancellor Angela Merkel, French President Francois Hollande and Poroshenko was restrained and, overall, pro-Ukrainian.. Merkel and Hollande reiterated their support for Kiev and criticized Russia and the Donbass militias for breaching terms of the Minsk peace agreement. However, despite these signals, Russian analysts insist that the talks were not pleasant for Poroshenko, with Europe unwilling to fully stand behind Kiev.

"Europe would be satisfied with broad autonomy [for the Donbass – RIR], as well as some compromise figure at the head of this autonomous region," said Alexander Guschin, professor of Humanities at the Russian State University. "The Europeans agree that Russia should participate in this process, either publicly or behind the scenes.”

This option, however, does not suit Kiev. "Poroshenko says that the current version of the amendments [to the Ukrainian Constitution – RIR] is already a big concession, it is the most that he can do and can have the Verkhovna Rada [the Ukrainian parliament – RIR] pass," said Guschin. "The Minsk agreements require more of him, yet Poroshenko himself views these accords not as a roadmap, but only as a way to gain time."

Russian President Vladimir Putin was pointedly not invited to the talks in Berlin.

Putin absence not a snub

Sergei Utkin, director of the Strategic Evaluation Department at the Russian Academy of Sciences’ Centre for Situations Analysis, says Putin’s absence at the Berlin meeting, called after a recent surge in fighting along the frontlines in eastern Ukraine, indicates that Paris and Berlin wanted to use the talks to pressurise Kiev.

"France and Germany are critical towards Russian policy on Ukraine and therefore during meetings in which Russian representatives participate it is difficult to pressure Ukraine and agree with some of the arguments that Russia advances with respect to Kiev," explained Utkin.

Utkin claimed that, contrary to earlier statements by Merkel, it is principally the Ukrainian government that needs to act in order to save the Minsk agreements, which currently represent the only grounds for establishing a settlement in eastern Ukraine. “First and foremost, this concerns the constitutional amendments and arranging the procedures for elections in the Donbass," he said.

No alternative to the Minsk format

While it benefits from the general backing of the EU, Kiev cannot afford to push Paris and Berlin too far. "Relations with the EU is one of the Ukrainian government's priorities and its success partially depends on the conditions of those relations," said Utkin. "The EU's opinion of the Ukrainian reforms' success is authoritative for many Ukrainian citizens. In general, Kiev cannot afford to quarrel with the EU."

According to Utkin, time and "the dynamics of the development of the negotiations process, especially within the contact group" will show whether or not Europe has been able to use these tools.

"The Berlin meeting confirmed that no one intends to renounce the Minsk documents, even though following them thoroughly in the established timeframe is becoming an unattainable ideal. The process of the talks itself, as in other conflict situations, helps reduce the tension, even if it does not lead to unequivocally interpreted results," said Utkin.

However, a sticking point is likely to remain the fact that Europe is calling on Russia to wield its influence over the Donbass rebels in order to force them to implement their side of the bargain – something which so far Moscow appears reluctant to do.

"Europe expects a concession from Russia, in particular, the cancelation of elections in the Donbass and perhaps even a change of the administration in the DNR and LNR [the Donetsk and Lugansk “people’s republics,” the two unrecognized entities formed by the rebels – RIR]," said Alexander Guschin.