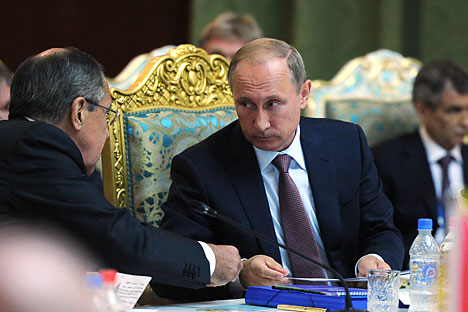 Mikhail Klimentyev/RIA Novosti
Held in the Tajik capital Dushanbe, the Collective Security Treaty Organization (CSTO) summit on 14, 15 September primarily focused on countering the threat of Islamic terror in Central Asia. Russian analysts, however, believe corruption and poverty are bigger threats to the region.

The Collective Security Treaty Organization was established in 1992 and as of today includes six countries: Russia, Armenia, Belarus, Kazakhstan, Kyrgyzstan and Tajikistan. It is a military-political alliance. The CSTO has its own armed forces, the CSTO Collective Forces, which were created on the basis of the member-countries' armies. The member countries form a joint defense policy.

"The dimension of this organization's activity has gone far beyond the limits of Iraq and Syria," RIA Novosti cites Putin as saying. "They plan to spread their activity to Europe, Russia, Central and Southeast Asia. And we are preoccupied."

President Putin also worried that, after withdrawal of the International Security Assistance Force (ISAF) from Afghanistan, terrorist groups would move from there to Central Asian countries.

Slamming the policy of western countries on Syria, Putin urged them to "renounce their double standards and their policy of directly or indirectly using separate terrorist groups for achieving their own political objectives."

He also underlined that without cooperating with the Syrian government it will be impossible to drive ISIS terrorists out of Syria, where they have seized large swathes of territory over the last year.

How effective is the CSTO?

Other participants of the summit, which was attended by the heads of all six member states, also see a threat in the activities of ISIS and are trying to improve the CSTO's interactivity mechanisms for countering terrorism. Belarusian President Alexander Lukashenko presented the idea of "creating a regional antiaircraft system" and strengthening the organization's military potential, while Armenian President Serzh Sargsyan said that it is necessary to introduce a collective security strategy next year.

"Today the CSTO is proving to be an effective organization," said Deputy Director of the Institute of CIS Countries Vladimir Zharikhin. "Thanks to the joint activity of the member-countries' special services, the organization is able to block Islamist extremists' attempts at penetrating the region without deploying forces."

However, another Central Asia specialist, Alexei Malashenko from the Moscow Carnegie Center, noted that since the armed forces of the CSTO have still not participated in any armed conflict, it is too early to speak about their effectiveness.

"Absolutely nothing is known about the CSTO's armed forces since no one has ever seen this organization in action. Joint exercises are good but they are always different from real combat,” he said.

Is the Islamist threat real?

Judging by the statements made by the summit's participants, the CSTO is serious about the ISIS problem. For example, Kazakh President Nursultan Nazarbayev was alarmed by the increasing number of CSTO member-country citizens fighting for the extremists, while CSTO Secretary General Nikolai Bordyuzha said that CSTO special services have identified (and blocked) more than 57 websites created to recruit Central Asian residents into the ranks of ISIS.

At the same time, Alexei Malashenko believes that the threat to Central Asia posed by the group has been rather exaggerated.

"Today the ISIS militias are warring in Syria and Iraq and are practically fighting for the survival of their quasi-state. Yes, there have been declarations of expansion, including expansion into Central Asia, but for now they've only been declarations,” he said.

“There is the danger of ISIS entering the region but the mass media exaggerates it. The Islamists' success or failure in Central Asia depends largely on how effectively the regimes in that region will solve the existing social problems, how they will fight corruption and poverty."