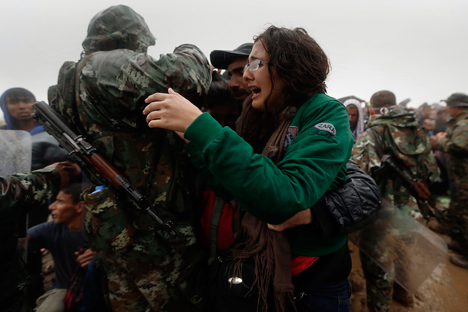 A young Syrian refugee girl struggles with armed Macedonian police at a border crossing with Greece, on Sept. 10.

Reuters
The current standoff between East and West is the worst of all options in the face of the rampaging ISIS threat.

With Europe going through the most acute refugee crisis since the Second World War, European governments are contemplating various “military options” to ease the situation in Syria. French Prime Minister Manuel Valls announced France had launched reconnaissance flights over Syria, to better see which targets “could be hit”.

Wolfgang Ischinger, influential German diplomat and chairman of the Munich Security Conference, said Europe’s “strategy in Syria could only inspire trust if backed up by the possibility of military action.”

It is in this context that talk of Russia’s “growing military presence in Syria,” as the West sees it, sets Moscow on a collision course with both the EU and the U.S.

But is President Bashar al-Assad really the source of all evil in Syria? Russian president Vladimir Putin says “the refugees are fleeing the Islamic State of Iraq and the Levant (ISIL, or ISIS), not Assad.” Speaking to leaders of countries from the post-Soviet Collective Security Treaty Organization (CSTO), Putin said that Russia would continue sending arms and instructors to the Syrian government, because Assad is ISIS’s enemy and “without our help, the situation in Syria would have been even worse”.

In Libya, which the West left to its own devices after helping to remove Colonel Gaddafi, the civil war is even more protracted than that in Syria.

Moscow’s pro-Assad position raises the stakes in the dispute with the U.S. The Pentagon said it had satellite images of an airbase being built near Latakia in western Syria that it claims may be used by the Russians in future. The Pentagon also noted Russian-made T-90 tanks guarding the future airbase. Russia denied that it planned to “occupy” Syria, claiming it was only fulfilling existing contracts for arms deliveries signed with the Syrian government before the civil war started in Syria in 2011-12. While denying Russia had “boots on the ground”, foreign minister Sergei Lavrov admitted that Russian instructors were arriving in Syria with the weapons. Lavrov also said western air strikes against ISIS were “ineffective” without co-operation with the main ground forces fighting the Islamist extremists – Assad’s army and the Kurdish militias.

Western media reports suggest the Kremlin has already confirmed Russian “military involvement in Syria’s civil war”. In fact, Putin’s comments were much more cautious. On Sept. 4, 2015, in Vladivostok, he said: “American air strikes are dealing certain blows [to ISIS]. Their effectiveness is not high. But to say we are ready to do this [to send Russian servicemen to Syria] – this is still premature.”

He added: “We are already providing Syria sufficiently serious aid: with equipment, with the training of its servicemen, with arms. We signed major contracts with Syria five or seven years ago, we are now fulfilling those contracts.”

It was not enough for the American administration. The next day, Sept. 5, U.S. secretary of state John Kerry called his Russian counterpart, Lavrov, saying that if the information about “Russian involvement” was true this could lead to a “further escalation of the conflict”. On Sept. 7-8, NATO members Greece and Bulgaria closed their airspace to the Russian planes that Moscow said it was using to deliver humanitarian aid to Syria.

The gap between Moscow and Washington over Syria grew day by day, reflecting the general lack of trust between Russia and the West at large. On Sept. 11, U.S. President Barack Obama pressed on with the issue. In a speech to servicemen in Fort Meade, Maryland, Obama said that he had already “had a conversation” with the Russian president about Russian aid to the Syrian government “four or five years ago”. His message then had been that helping Assad “was a mistake, it would make things worse”. Obama added that Putin “did not take my warnings, and as a consequence things have gotten worse”.

However, Obama did not exclude Russia’s participation in the fight against ISIS – but it had to be on American terms, without co-operating in any way with the Syrian government. “If they [the Russians] are willing to work with us and the 60-nation coalition we put together, there’s the possibility of a political settlement in which Assad would be transitioned out and a new coalition of moderate, secular and inclusive forces could come together to restore order in the country”, Obama said.

Obviously, there is a huge rift in understanding between Moscow and Washington. A personal meeting could help. At the end of September, the Russian president plans to visit New York City to attend the 70th meeting of the UN General Assembly. No meeting with Obama is scheduled – something Russia’s foreign ministry has made clear was a U.S. decision. Putin has officially voiced the idea of an anti-ISIS coalition, which could include not only Russia, the West and Iran, but even such opponents of Assad as Saudi Arabia and Jordan. In fact, Putin’s suggestion appeared to get some backing from Saudi Arabia, its relations with Russia having improved of late following the promise of $10bn in investment from the oil kingdom. But Russia’s plans have been given the cold shoulder in Washington.

On Syria’s post-war future, Russia and the U.S./EU alliance also differ. Both Russia and the West talk about an “inclusive” future government for Syria. But Russia says such a government could be formed both from elements of the Syrian government and “healthy” groups among the Syrian opposition, while the West insists on Assad’s removal as a precondition for any political settlement. The end result is that Russia and the West act in Syria not as allies, but as competitors, thus allowing ISIS to tackle its foes one by one. In a recent interview on Russian television, Lavrov bemoaned the West’s refusal to co-ordinate its strikes against ISIS with the Syrian authorities, which he says, “are fighting ISIS on the ground”.

Russia has long objected to what it sees as biased western media reports on its activities in Syria. Back in 2012, NBC News accused Russia of sending troops to support Assad; no sign of these “Russian troops” ever appeared on the frontlines of the Syrian civil war. In the same year, Turkish fighter jets forced a Syrian Air passenger plane on a flight from Moscow to Damascus to land in Istanbul, where it was searched for weapons by Turkish authorities. No weapons were ever produced in public.

The Russian public is divided over reports of Russian involvement in Syria. But the major tone is one of regret: that Russia and the West cannot agree a common front even in the face of such an obvious threat as ISIS. And that the longer the West chooses to confront Russia, the stronger ISIS becomes.

“On June 22, 1941, Churchill had enough common sense to make an alliance with the USSR, because the alternative alliance with the Third Reich was even less appealing than the one with Moscow,” observes Maxim Sokolov, a popular Russian political commentator. “But John Kerry is obviously no Churchill. He has a different style of thinking.”

Dmitry Babich is a commentator for Sputnik. 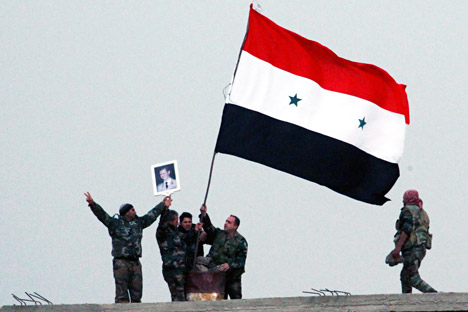