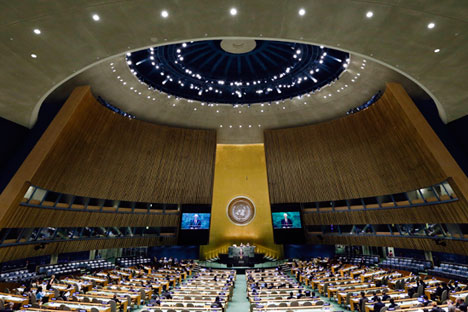 The role of the UN as the universal guide has not diminished.

AP
The special commemorative session of the United Nations, on the world body’s 70th anniversary, brought together leaders of nations across the world to reflect on the organisation’s major developments, and adoption of the UN’s Sustainable Development Goals (UNSDG).

The goals outlined in the document “Transforming our World: The 2030 Agenda for Sustainable Development” include elimination of extremism, addressing climate change, women’s education, clean water, reduction of inequality, sustainable energy and good governance, to ensure healthy lives for the world’s population. A major aim is to make the world free of poverty by 2030. About 1.3 billion of world’s people are poor, making this a herculean task.

UN Secretary General Ban ki-Moon said the document provided a blue print for action to ensure ‘peace, security and dignity in a healthy planet’ for the world’s people. These goals set normative standards for action for national actors. There are, however, some impediments against realizing these goals. They are not mandatory for nations to follow. Keeping in view the divide between the developed and the developing countries on a range of issues including climate change, transfer of technology and resources, it is difficult to predict whether the goals will be realized by 2030. A report suggests that the goals would require from $3.5 to $5 trillion every year till 2030 to realize.

Other than the SDG, the other area of convergence among leaders was the menace of the Islamic State. Indian Prime Minister Narendra Modi stressed the importance of delinking terrorism from religion and said IS needs to be seen as a terrorist organization. Others, like Egyptian President Abdel-Fattah el-Sissi pointed out how the ‘dangerous extremist terrorist ideology’ is affecting the stability of his country and the wider region.

Modi in his speech also quoted (‘Mahatma’ M.K.) Gandhi; “One must care about the world one will not see.” He outlined his government’s policies and priorities towards sustainable development.

Founded in 1945 by victorious powers of World War II, the UN was expected to save the world from the scourge of future wars, and provide peace, security and dignity to all people and nations. The Cold War era led to bipolarization of international politics, and consequent bipolarization of the UN and UN Security Council. The end of the Cold War raised hopes that the post-Cold War world would be peaceful. The Agenda of Peace announced by then UN Secretary General, Boutros-Boutros Ghali in 1992, the Human Development Report of 1994, and the 2003 report of Human Security Commission titled ‘Human Security Now: Protecting and Empowering People’ of 2003 raised hopes about the UN serving as a torch bearer of freedom, democracy and equality in the world.

There is, however, a tussle between lofty ideals and interests of the powerful members in the UN. Disagreement among UNSC members over Syria is a case in point. While the US Ambassador at the UN, Samantha Power, recently blamed Russia for the stalemate in the Middle East, and warned of prospects of exploring other avenues, Russian Ambassador Vitaly Churkin, argued that the UNSC cannot be used as a forum for regime change, whether in Syria or elsewhere. The humanitarian crisis in Syria continues, with loss of over 200,000 lives and millions being displaced. Ban ki-Moon termed the failure of the UNSC to address Syria as ‘madness,’ and appealed the body not to ‘waste any further time’.

At the high end segment of the UN General Assembly this week, Russian President Vladimir Putin will elaborate the Russian plan at the UN. This would likely entail a cooperative approach on Syria and on fighting the Islamic State. His meeting with his US counterpart, President Barack Obama, will hopefully clear some misunderstandings.

The reform of the UNSC was also raised. India, a major contender for a permanent seat in the Council, argued that it was not prudent to expect the international body to work effectively, while one sixth of the world’s population (the Indian population) is not represented in it. Modi argued, “We must also reform the United Nations, including its Security Council, so that it carries greater credibility and legitimacy and will be more representative and effective in achieving our goals.” Modi met leaders of the Group of 4 nations (G-4; Brazil, Germany, India and Japan) to buttress their demand for UNSC reform. While Russia has supported India’s (and Brazil’s) candidature, the Indian goal may be difficult to realize in the near future.

The UN of the 21st century has presented both hopes and dilemmas. Its mandate has generated lofty policies and goals like the UNSDG, but its actual working has belied high expectations. Geopolitical visions and interests of its powerful members, and their clashes, have dominated the ideal. Adoption of UNSDG by all members indicates that, despite differences, the role of the UN as the universal guide has not diminished.

Dr. Debidatta Aurobinda Mahapatra is an Indian commentator. His areas of interests include conflict,terrorism, peace and development, South Asia, and strategic aspects of Eurasian politics. 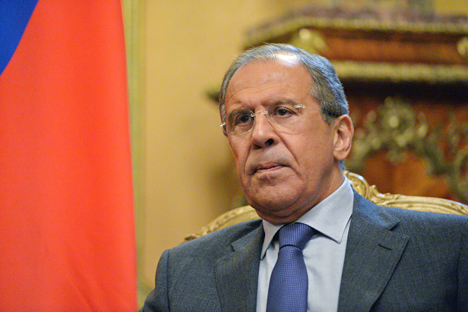