Putin orders military strikes on IS targets, after authorization 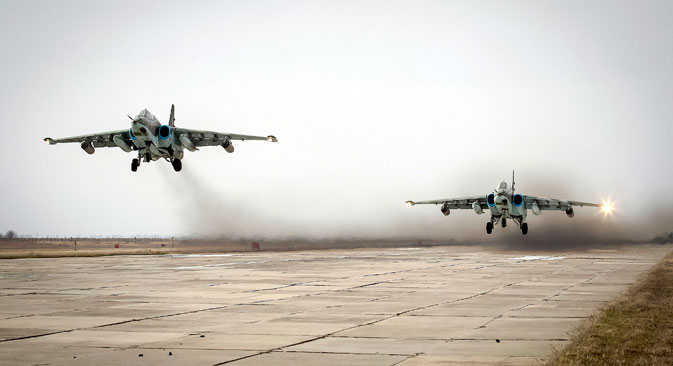 Reuters
Russia’s Federation Council has authorized President Vladimir Putin to use Russian military troops abroad. This follows a request from Syrian President Bashar al-Assad, who sought military assistance from the Russian President. According to analysts, it appears that Russia and the United States will now cooperate against the Islamic State. Shortly after the authorization, targeted strikes began on Islamic State targets, TASS reported.

The Russian Federation Council (FC), in a closed session on Wednesday, September 30, authorized the use of Russian Armed Forces abroad. President Vladimir Putin had sought authorization from the Upper House of Parliament, after Syrian President Bashar al-Assad asked for military assistance.

Shortly after receiving authorisation from the FC, Russian aircraft started pinpoint strikes against IS positions in Syria, the Defence Ministry said. According to a report in TASS, Russian warplanes have attacked military equipment, communication centres, motor vehicles, and munitions and fuel and lubricants depots of the Islamic State terrorists.

Russia’s Aerospace Forces planes have started dealing pinpoint strikes against the positions of the Islamic State group in Syria, outlawed in Russia as a terrorist organisation, Major-General Igor Konashenkov told the media.

"In accordance with a decision by the Supreme Commander-in-Chief Vladimir Putin Russian Aerospace Forces planes on Wednesday started an operation to deal pinpoint strikes against ground targets of the IS terrorist group in the territory of the Syrian Arab Republic," he said. "The Russian Defence Minister, General of the Army Sergey Shoigu told his counterparts in the Collective Security Treaty Organization that in the course of the military operation in Syria Russian warplanes have been attacking military equipment, communication centres, motor vehicles, and munitions and fuel and lubricants depots of the Islamic State terrorists.

The Indian government was informed of the decision by the Russian Embassy in New Delhi, before the military strikes began earlier on Wednesday.

Once the matter was decided on Wednesday, September 30, Sergei Ivanov, Chief of the Presidential Administration, said the number of Russians joining the Islamic State [which is banned in Russia - RIR] is rapidly growing.

“We are talking here not about dozens, nor hundreds, but thousands” of people, and it is advisable to resolve this problem in faraway countries, Ivanov said. “This decision is justified by Russia’s national interests,” he explained. Ivanov reminded his audience that this was not the first time that Russia would be using its armed forces to combat terrorism abroad.

“In the early 1990s, we did almost the same thing in Tajikistan,” Ivanov said.

“The use of the armed forces on the territory of a third country is allowed, in general, by the resolution of the UN Security Council, or at the request of the legitimate leadership of the that country,” Dmitry Peskov, Presidential Press Secretary said about the approval to use military force. “As a matter of fact, Russia is the only country that will be carrying out such military operations on a legitimate basis, namely at the request of the legitimate president of Syria.”

Ivanov also stressed that that the other countries carrying out air strikes on Syrian territory were acting in contravention of international law.

“This is the fundamental difference between our approach and the approach of our Western partners. They do not respect international law, while we observe it,” Ivanov said.

Apparently, an agreement was reached

On the eve of the 70th Anniversary Session of the UN General Assembly, in an interview with the American CBS television network, President Putin said Russia would not participate in any military operations on Syrian territory, or in other countries.

“In any case, as of today we have no such plans,” said the Russian President.

However, as RIR learnt from Alexei Arbatov, Director of the Centre of International Security IMEMO RAS (Institute of World Economy and International Relations of the Russian Academy of Sciences), they were discussing ground operations.

“This talk did not include air support, or air strikes against the positions of the Islamic State,” Arbatov said.

Colonel Viktor Litovkin, retired military expert, agreed with him: “Putin was talking about ground operations. Russia will not participate in these, but it was never said that Russia would refuse to provide air support, intelligence support, and carry out strikes against terrorist bases. Moreover, it appears that after Putin spoke with Barack Obama [in a meeting held on the sidelines of the UN General Assembly] some decisions were taken regarding Russia’s participation in this operation.”

Such an agreement between leaders of Russia and the United States was confirmed by the US Embassy in Russia, in their comments on the Federation Council’s decision. The two Presidents agreed that they share common interests in the fight against the terrorism of the Islamic State in that region, the embassy said.

However, this does not mean that Russia has agreed to enter into an international coalition against the IS under the auspices of the United States. “Most likely, this will just be close cooperation between Russia and its allies; Iraq, Iran and Syria. In fact, this will be co-operation between two coalitions,” said Ivan Konovalov, director of the Centre for Strategic Trend Studies and an expert on international security. Konovalov added that approval from the Federation Council was required for legitimate participation by Russian aircraft in the fighting. [According to the Constitution, the right to make decisions on use of Russian Armed Forces abroad is within the purview of the FC]. The last time this was required was in March 2014, when the upper house unanimously authorized the President to use armed forces in Ukraine. “In the end, armed forces were never sent in,” Konovalov recalled.

The Russian government has been prompt to use the given authorisation this time.