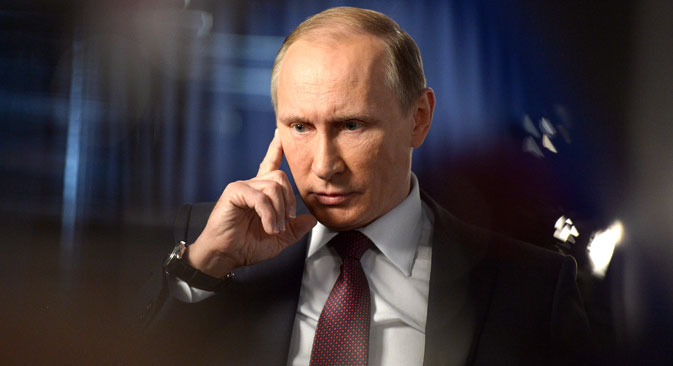 SOCHI, RUSSIA. OCTOBER 12, 2015. The president of Russia, Vladimir Putin, in an interview with Rossiya 1 TV channel.

Alexey Nikolsky / TASS
Defence cooperation with partners and military hardware sales will drive Russian growth, even while Russia’s foreign policy remains completely peaceful, Russian President Vladimir Putin said in a wide-ranging interview with Rossiya-1 television channel presenter Vladimir Solovyov. President Putin particularly spoke about the excellent defence cooperation with India, giving the example of the BrahMos missile, and other joint ventures, creating a “high-tech production sector” in India. The interview was conducted after the massive bomb explosions in Ankara over the weekend rekindled fears of increased terrorist strikes in the wake of the Russian aerial raids on Syria.

Vladimir Putin: “Yes, that’s right. This is the way things work all around the world; in the United States, Europe, China and India.

Despite defence cooperation and military hardware sales set to restore the Russian economy on a growth trajectory, Russia’s foreign policy has always been a peaceful one, the President said. He also denied any ambitions of taking over smaller former Soviet Republics as has been widely speculated.

“Russia has a peaceful foreign policy, and this is no exaggeration. If you look at the political map of the world and Russia’s place on it, it is obvious that we have no need for others’ territory or natural resources. We have enough resources of our own and we have no need for war or conflict with anyone else,” President Putin said.

“In 1990, it was Russia that started the divorce process between the republics making up the former Soviet Union. We showed good will and gave these countries their independence. This happened not as a result of civil war or conflict, but was a consensus decision, and Russia’s stance played a central role in this decision.

We therefore have no desire to restore the empire or rebuild the Soviet Union, but we do have a duty to defend Russia’s independence and sovereignty. This is what we have been doing and will continue to do.”

“As for the economic dimension, coming back to what I said before, we drew up the plans to modernise and rearm our country’s armed forces with the most up-to-date systems several years ago. It was 10 years ago now that we started working on these plans and formulating the tasks ahead. Let me say again that this was all about natural replacement of aging weapon systems,” the Russian President said in a rare interview.

“Another circumstance I want to note in this respect is that all of this work involves advanced technology, and the tasks we are carrying out in the defence industry will push us into developing not just applied but also fundamental science and will have benefits for the entire economy.”

Referring to the sanctions which have hurt the Russian economy and increased the urgency to look for import substitution, President Putin said, “Let me say a few words about import replacement in this respect. We purchased abroad many of the components we were using in the defence industry. But it was always clear that importing more sensitive components and technology and even spare parts for the defence industry was not a very far-sighted policy, to put it mildly.

Having petrodollars made it easy to buy things abroad of course, but we need to develop science and industry here in Russia. In this sense, the import replacement that our partners’ actions have pushed us into is actually precisely what our country needs. We are therefore not creating problems for our economy, but on the contrary, are raising it to new levels of technological progress.”

Vladimir Solovyov: The terrorist attack in Turkey raises questions that many are asking themselves now in Russia. We are fighting terrorism, which threatens our country too, and are trying to stop it before it reaches our borders. But are we ready here at home to resist attempts to once again bring suffering and death to our soil?

Vladimir Putin: “If you think about it, we have already become used to hearing of a terrorist attack here, a terrorist attack there. Unfortunately, we have not yet got rid of this threat. Back at the time when I took the decision to launch operations against international terrorist groups following the attack on Dagestan, many people said to me that we cannot do this for all sorts of reasons, said there is a risk the terrorists will do this, try that.

I came to the conclusion that if we fear that the terrorists will so something, they will definitely do it. We must take pre-emptive action. Of course, there are risks, but let me say that these risks existed anyway, even before we began our operations in Syria.”