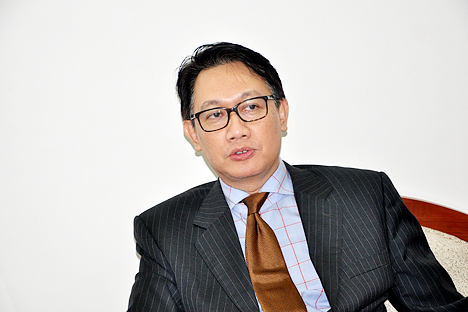 Government of Indonesia
In an exclusive interview with RIR, Arif Havas Oegroseno, Deputy Minister of the Coordinating Ministry of Maritime Affairs of Indonesia talks about the security challenges in the Asia-Pacific and Russia’s role as a maritime power in the region.

RIR: What do you consider are the main traditional and non-traditional threats to the maritime security of the Asia-Pacific region?

A.H. Oegroseno: The main traditional threat in my opinion is the sovereignty disputes, which we still see in the region. Unfortunately these disputes are not always managed with discussions. There are of course, on-going discussions, workshops, seminars and conferences, but the ground reality suggests a different story.

The most important non-traditional threats are two-fold in general. They are manmade and non-manmade. The manmade threats include drug smuggling, human trafficking, human smuggling and illegal fishing. There was a problem of arms smuggling in places like the southern part of the Philippines and northern part of Sulawesi. There was a conflict in Mindanao. These problems were effectively taken care of.

The non-manmade security threat is nature. The warming of the ocean, which is actually manmade. The rising of sea levels, the acidification of the oceans and the changing of weather patterns…these are all challenges that we face today.

Some of these challenges cannot be handled alone. Some of them need to be handled by cooperation between countries, international organizations and many different stakeholders.

RIR: Given the tensions over maritime boundary disputes in the region, what do you think is the right approach towards a solution?

A.H. Oegroseno: Countries need to look at these issues very carefully, thoughtfully and comprehensively. Naval officers need to establish a mechanism where they agree to not create unnecessary complications.

We need to instill the culture of international law, where if we have a conflict we discuss that in a civil manner. Take the matter to court. If you cannot bring the matter to court then let’s try arbitration. If that doesn’t work it’s okay. Countries have sovereignty disputes for hundreds of years, as in Gibraltar. But (England and Spain) still managed to create an atmosphere of trust.

Discussions are the best way to deal with disputes. We are obliged under the UN charter and the UN Convention on the Law of the Sea, the Treaty of Amity and Cooperation in Southeast Asia to address issues peacefully. We need to implement these treaties and not to lose track of the greater stakes.

At the end of the day, the question is very clear. Do we want chaos or do we want peace?

This is not a time for us to have something similar to the Cold War. In the Cold War, everything was classified as black and white, where conflict was met with military deployment. During the Cold War, nobody would have imagined that somebody would put a bomb on his body and go to the market and blow himself up. It happens today and this is not a threat that one single country can handle.

The strategic environment has changed completely and countries cannot have a black and white assessment. We have cyber crimes. During the Cold War, computers hardly existed.  The new developments create a situation where everybody needs a partnership. We need more partnerships to solve maritime disputes and bring about peace.

RIR: How does Indonesia feel about the increasing number of air and naval bases in the Asia-Pacific, such as Cam Ranh Bay, which is used by Russian aircraft?

A.H. Oegroseno: We have to look at the larger picture. I think military bases are reflections of treaty obligations. The U.S. is in Asia because of its treaties with a number of countries. We also have to look at our region in terms of our existing infrastructure. ASEAN plays an important role in mediating different interests.

The most important element in security is the creation of regional architecture that stabilizes conflict-like situations.

RIR: What role do you see Russia playing in the maritime security environment of the Asia-Pacific?

A.H. Oegroseno: Russia has an important role in the Asia-Pacific. Russia is part of the East Asia Summit. In the context of the East Asia Summit, we discuss maritime security. As a matter of fact, I just attended the ASEAN Extended Maritime Forum, where I met my colleague from Russia and we discussed various issues related to maritime security in our neighborhood. Russia’s contribution in this area is highly expected. I believe this scenario is here to stay. Russia is an important part of Asian security mechanisms.

The article is abridged. Read the full version at ASIA.RBTH.ru.