Assad thanks Russia for timely help 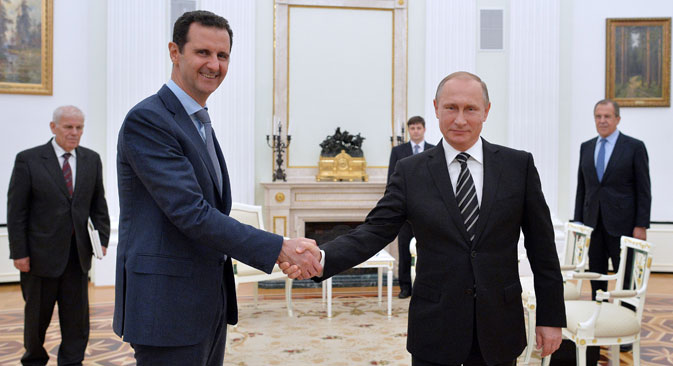 TASS
The political steps taken by Russia since the beginning of the Syrian crisis did not allow the situation to evolve in accordance with a more tragic scenario, the Syrian leader says.

Syrian President Bashar Assad at the meeting with Russian leader Vladimir Putin in Moscow on Tuesday extended thanks to the Russian authorities and people for helping to preserve the unity and independence of Syria.

"First of all, I would like to express huge gratitude to the whole leadership of the Russian Federation and the Russian people for the assistance they are rendering to Syria. Thanks to them for standing for Syria’s unity and independence," the Kremlin’s website quoted Assad as saying.

"The most important thing is that all this is being done in the framework of the international legislation," Assad said according to the transcript.

The political steps taken by Russia since the beginning of the Syrian crisis did not allow the situation to evolve in accordance with a more tragic scenario, Assad said.

"The political steps taken by Russia since the beginning of the crisis have prevented the situation in Syria from evolving in accordance with a more tragic scenario," he said during the meeting. "But for your actions and your decisions, terrorism that has spread in the region would have taken a larger area and spread to an even larger territory." "These steps were confirmed by the fact that you took part in the fighting in a united front to combat terrorism," the Kremlin website quoted Assad as saying.

Assad arrived in Moscow on Tuesday on a working visit, the first trip abroad since the civil war hit the country in 2011. The Kremlin hosted the Russian-Syrian talks in the narrow and extended format with the participation of the representatives of the Russian leadership.

Russia’s warplanes have been pounding Islamic State (IS) terrorist targets in Syria since September 30 at the request of Syria’s President Bashar Assad. The Russian aerospace group in Syria consists of more than 50 planes and helicopters.

Syrian President Bashar al-Assad has spoken in favor of a political solution to the crisis in his country, saying that military operations should be followed by political actions.

"Any military action suggests that it will be followed by political steps," Bashar al-Assad said. The Syrian president noted, "It is necessary to stop any kind of support to terrorist groups and let the Syrian people determine the future of their country." According to him, "the goal of the combat operations [of the government forces in Syria] is the destruction of terrorism, which hinders the political solution [to the crisis in the country]." 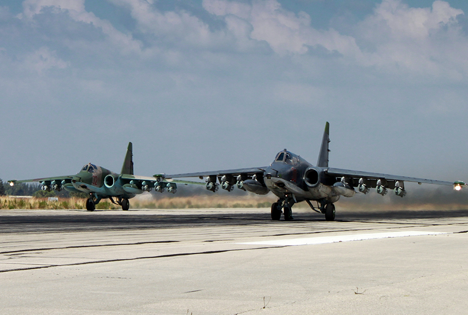