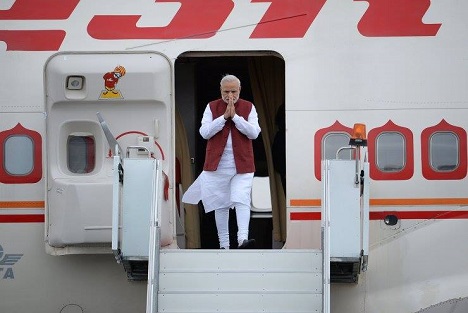 Narendra Modi arrives in Ufa for BRICS and SCO summits in July, 2015.

BRICS2015.ru
Prime Minister Narendra Modi is off to Moscow on Wednesday hoping to energise bilateral ties and to persuade Russian President Vladimir Putin that his country continues to be an important strategic partner of India.

Indian Prime Minister Narendra Modi is headed for Moscow Wednesday for the annual bilateral summit of the strategic partners, hoping to energise bilateral relations and persuade Russian President Vladimir Putin that his country continues to be an important strategic partner.

To help these efforts, Modi has armed himself with an expensive wish list, which in these difficult economic times for Russia – sanctions and depressed oil prices –will be music to the ears of the Kremlin leaders.

Topping the shopping list, reflecting the importance of defence ties, will be the nearly seven billion dollars allotted for acquisition of military equipment. The most important among these will be the S-400 “Triumph” air defence system (this system permits interdiction of hostile missiles and aircraft). Reports say that India is looking for five units. The negotiations about this acquisition, according to Russian press reports, are going to be “not easy”. Primarily, because India finds the asking price too high, writes Sergei Strokan in the Kommersant newspaper. “Finally everything will depend on the talks between the two leaders,” a source told Kommersant. If successful, India will be the second country after China to buy the S-400 system.

India accounted for 28% of Russian military equipment exports in 2014. This amounted to 4.7 billion dollars, according to Kommersant.

The two sides appear to have hit a speed bump over the collaboration on and the leasing of a “Yasen” class nuclear-powered submarine. This is Russia’s latest top-of-the-line submarine. Russia, however, appears reluctant to share this technology with India, partly because there is scepticism about India’s ability to absorb the new levels of technology in this submarine. Instead, the Russians are hoping that the talks about the lease of a second ‘Shuchka’ (translated as “Pike” and not “Akula” which means “Shark”) nuclear-powered submarine come to fruition.

This submarine, developed as Project 971, is similar to the Chakra II, which is currently on lease with the Indian Navy. However, the submarine will be substantially modernised in accordance with Indian requirements, according to Indian press reports. Another hitch is the apparent hiccup with the 5th generation fighter project. India was to be joint developer, but now that appears uncertain. The discussions between Modi and Putin are likely to bring some clarity on this issue.

The second important item on the list is cooperation in civilian nuclear energy. It is widely expected that India will offer Russia a new site for construction of a nuclear power plant. The site is likely to be in Andhra Pradesh and will be home to six reactors, according to sources. Also, it is expected that an agreement for two more reactors in Kudankulam will be signed during the visit, bringing the total number of Russian built reactors in India to twelve.

The expected military and nuclear energy deals underscore the importance cooperation in these spheres has acquired in maintaining the strategic nature of Indo-Russian ties. But Prime Minister Modi wants to leverage these strengths to address the primary area of weakness in bilateral ties – the economic relationship.

The project to construct 200-odd Kamov helicopters in India in collaboration with Indian public and private sector companies highlights this approach. Reports say that Anil Ambani’s Reliance Group is likely to be the Indian private sector partner in this project. If the inter-governmental agreement is signed, this project will go a long way in bolstering the “Make in India” programme. Similar efforts are being made in shipbuilding.

Bilateral trade in 2014 was less that 10 billion dollars and estimates for the first six months of 2015 are about one third of that figure. This is abysmally low considering the potential and is not commensurate with the level of political and strategic ties. There are several areas in which potential synergies exist – energy, pharmaceuticals, agro-industries, and infrastructure development. Some progress exists, but more needs to be done. To actualise the potential the two sides are considering a multi-billion dollar investment fund.

In the modern age, with globalisation processes dominating it will be difficult to sustain a long-term strategic partnership without a solid economic foundation.” says a former Indian diplomat. Therefore, Russia’s sensitivity to India’s development challenges will go a long way in nurturing bilateral ties.

However, the visit will be not only about deals worth large sums of money. The two sides will also exchange views on several important developments in the world as well as discuss cooperation in multilateral forums. India and Russia are members of the UN and related bodies, such as G-20, BRICS, and SCO to name a few.

Among issues to be discussed, high on the agenda will be the question of tackling terrorism. Reports speak of a comprehensive counter-terrorism agreement being signed during the visit. There already exist mechanisms for intelligence sharing and these are highly valued by both sides. These discussions acquire additional salience in the light of developments in Syria and Afghanistan.

The two sides will exchange views on the developments in Syria.However, Afghanistan will occupy the prime space in discussions on regional matters, particularly, since Modi is expected to visit Kabul after Moscow.

Also, India will be keen to hear Russia’s views on its improving ties with Pakistan. There appears to be a view among Russian officials that with the proposed sale of some helicopters to Pakistan, Moscow has acquired some levers of influence in Islamabad.

“Pakistan continues to run circles around countries like USA and China. Russia will be easy play. Therefore it is important that India disabuse them (Russia) of this view (that helicopter deal gives significant leverage) and stop them from falling into this trap,” says an Indian security analyst.

A significant way to measure the levels of trust between India and Russia would be to see if the two sides have a frank discussion about their relations with China. This is necessary in order to establish if the Russia-India-China (RIC) forum could become a significant factor in influencing the evolving new order in Asia and the world.

Similarly, the Russians would like clarity about India’s growing ties with the United States. In fact, some of Russia’s hesitation in sharing some sensitive technologies with India may be because of the talks India is conducting with some Western countries for similar technologies.

Another area that holds rich potential is collaboration in science and technology. Cooperation in Outer Space and nanotechnologies are some of the directions for future cooperation. Last, but not least, there is a need to encourage academic interactions and people-to-people contacts.

Therefore, Modi has a wide range of issues to discuss in Moscow – over an informal, private dinner with Putin as well as during formal talks. If Modi succeeds in convincing Putin about India’s desire for a strategic partnership with Russia, he may indeed return with a “Triumph”.

The writer is a Senior Fellow, Observer Research Foundation.