EPA
Top government officials in Ankara are sending feelers to Moscow indicating their willingness to mend the ruptured relationship. In the midst of the near freeze in interaction between Turkey and Russia, can these veiled overtures be taken at face value? What chances are there of a reconciliation?

The near Cold War-like dimension to the war of words between Ankara and Moscow that characterized the autumn and winter of 2015 has now been replaced by intriguing signals sent out by top Turkish officials.

In what could either be a coincidence or a deliberate trial balloon floated to gauge Moscow’s reaction, Turkish Prime Minister Ahmet Davutoğlu and Transport, Maritime and Communication Minister Binali Yildirim have, within the space of a week, suggested an eventual reconciliation.

The statistics came first. The number of Russian tourists visiting Turkey’s resort province of Antalya dropped by 81.14 percent compared to January 2015, with just 2,427 Russians holidaying in the resort area in January 2016. Davutoğlu commented on the tourism downslide by expressing a desire that the crisis in Ankara’s relations with Moscow would not decrease the flow of Russian tourists visiting Turkey.

A week later Yildirim, a cabinet member, positively appraised cooperation between Russia and Turkey in years preceding the current crisis and lamented the current dire state of affairs which, in his words, is detrimental to both countries. Yildirim accentuated what appears to be the Turkish government’s official stance; that normalization of relations with Russia is desirable and welcome.

What is going on? Is this really a tacit signal to be taken into account by policy-makers in Moscow? Or is this unworthy of consideration?

Sergei Utkin, head of the department of strategic assessment and situation analysis at the Russian Academy of Sciences, opined that objective drivers are in play, and they are gradually pushing Turkey and Russia back into a common orbit.

“The economic and trade warfare is hurting both sides. Russia is the largest provider of energy for Turkey, while Turkish business, especially construction and developers companies, is visible on the Russian market. Don’t forget that the Turkish Riviera is the preferred holiday destination for millions of Russian vacationers. The tourist industry is a niche market; you cannot reformat it overnight. Both countries are on the receiving end of the current split. This is one of the factors pushing towards a settlement,” he told RIR.

The two countries indeed have a great deal to lose from the continuation of the sanctions and counter-sanctions.

Apart from economic and trade ties, are there other weighty arguments in favour of Moscow and Ankara burying the hatchet?

“The second factor is the cold-shouldered treatment of Turkey by its NATO allies. The U.S.-led alliance sent a signal to Ankara: No military adventure in the region would get NATO support. The third factor in the equation is that the Turkish leadership is reluctant to trigger off a major confrontation that would pit it against Russia. The outcome of such hostilities cannot be conceived with any precision. All of these elements suggest that there is growing appreciation of the need to find ways to mend relations with Moscow,” Utkin said.

What is likely to be the most formidable obstacle on the path of normalization of bilateral relations? Utkin termed it “personalized politics,” implying the centralized mode of decision-making in Turkey and, for the moment, in Russia.

“Much has been said in the Western media of the two alleged similarity of the two leaders, [Recep Tayyip] Erdoğan and [Vladimir] Putin. Skipping the over-exaggeration, much depends on to what extent the national leaders are psychologically ready to engage with each other. No doubt, it may happen after Ankara presents formal apologies, as demanded by Moscow. However, the format of the apologies could be variable. After all, Moscow has not shut the door altogether, [and is] most probably waiting for Ankara to make the first step toward reconciliation.”

Even at the height of tensions, when both sides exchanged harsh words and warnings, the Russian gas monopoly Gazprom maintained its commitment to pursuing the Turkish Stream pipeline project, which would inevitably turn Turkey into a major regional energy hub.The offer to have Turkey on board the ambitious project is still valid: Moscow has not backtracked on this large-scale, multinational, long-term endeavour.

History teaches us that war is a temporary discord invariably followed by peace. But the road to peace is always bumpy.

In theory, Erdoğan and Putin could find a face-saving formula to put behind them the animosity that broke out after the downing of the Russian Su-24 jet, when their divergence of interests on the Syrian issue, effectively contained earlier by both parties out of pragmatic self-interest, blew up into a diplomatic and economic confrontation. The incident cannot be forgotten but both countries could get over it.

For this to happen, a succession of conciliatory moves and sufficiently friendly rhetoric would be required to soften the angst and close this unfortunate chapter, so reminiscent of the 10 wars that Turkey and Russia fought over several centuries. 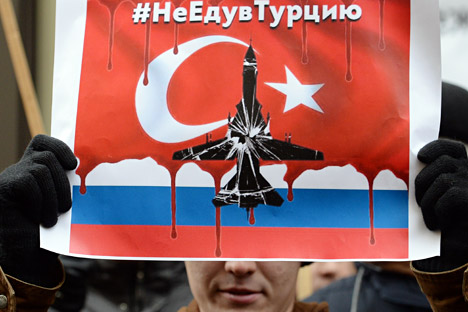