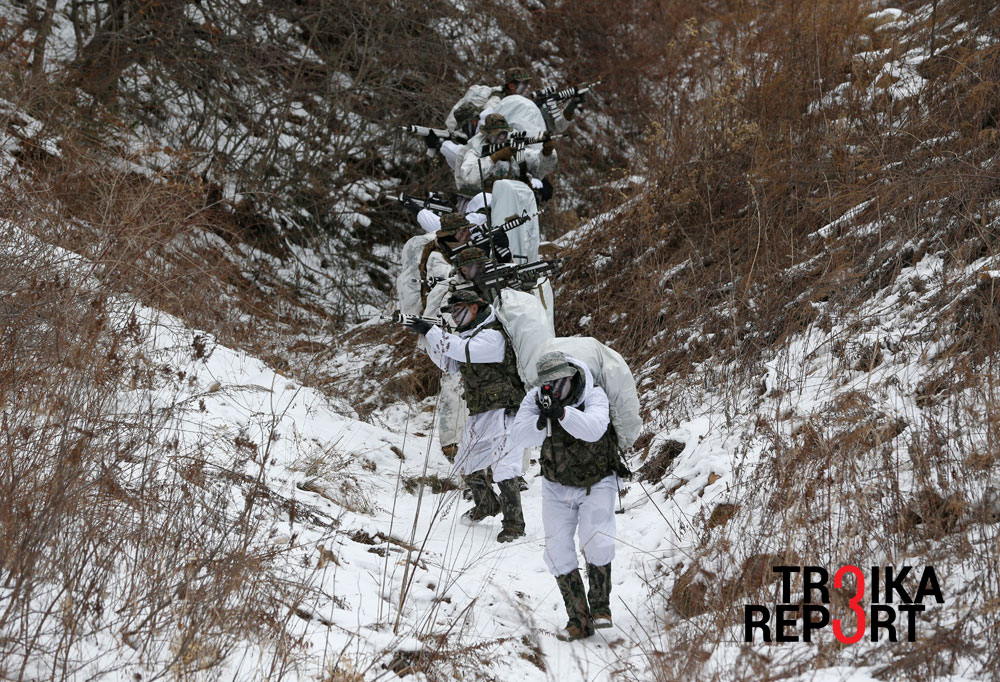 South Korean marines and U.S. Marines demonstrate in their reconnaissance mission during a combined military exercise in Pyeongchang.

AP
Russia delivered an uncharacteristically stern warning to North Korea, which has gone ballistic in recent weeks, with bellicose rhetoric and nuclear tests. Moscow losing patience with Pyongyang indicates that Kim Jong-un’s brinkmanship is threatening to disrupt the delicate balance in the Far East.

The Russian Foreign Ministry has, in a rare display of discontent, issued a strongly-worded warning to North Korea describing its recent warmongering rhetoric in the wake of the nuclear and missile tests (in January and February 2016) as unacceptable.

“We consider it to be absolutely impermissible to make public statements containing threats to deliver some ‘preventive nuclear strikes’ against opponents,” read the statement.

While the statement also apportioned blame for fanning animosity on the United States and South Korea, for staging their largest ever joint military manoeuvres (which kicked off on March 7), the key message was in the warning to North Korea that its reckless sabre-rattling was providing a legal basis for use of military force against it.

Moscow added a telling reminder that threats to attack or, the more so, “nuke” someone invoke the “right of a state to self-defence enshrined in the United Nations Charter.” Looking through records, this could be the harshest notice ever sent from Moscow to Pyongyang; a landmark event, indeed.

Why the tough wording?

Foreign policy analysts have taken due notice of the Russian statement.

“Russia is pointing out to North Korea that its inflammatory rhetoric risks giving its opponents – primarily South Korea and the U.S. – just cause to pursue military action against it,” Christopher Green, an expert in regional affairs, told the British daily ‘The Guardian’. Green also noted that “even Pyongyang’s few remaining friends are growing concerned about its increasingly confrontational stance.”

Despite the dubious assumption that Russia is a “friend” of North Korea, the main conclusion is correct: Moscow, as well as Beijing, is genuinely concerned over the surge in military activity by both sides on the Korean peninsula.

Why? Professor Georgy Toloraya, director of the Centre of Russian Strategy in Asia at the Russian Academy of Sciences, spoke to RIR.

“To a certain extent, North Korea’s leader Kim Jong-un has become a pain in the neck for everybody. The nuclear and missile tests he conducted this year give a moral and practical justification for the military build-up of American troops and armaments in the South. This is troubling for us, but most of all for China. The strongly-worded message of the Ministry of Foreign Affairs is a reflection of such concerns.”

Could it be also some flirting with the United States, given our ongoing cooperation on the Syrian track?

“I wrote an academic analysis of the pros and cons of Russia joining the sanctions regime against North Korea. In a conspicuous divergence among the comments that followed, two apposite approaches surfaced. Some experts claimed this was the right thing to do since we would be ‘rewarded’ by the U.S. in some way or another. Others insisted it would serve nothing at all, the U.S. would not be impressed, and we might lose touch and ties with North Korea.”

All this huffing and puffing by Kim Jong-un – could it be targeted at a domestic audience? Is it part of the appeasement of the top brass?

“Definitely, it has also the aim of propping up influence with the military and popularity with the population. However, I would hardly call it ‘appeasement’ because the generals are scared stiff by the recent purges and would hardly dare to challenge the supreme authority of the heir of the House of Kim,” Toloraya said.

Can China rein in the strongman of Pyongyang?

Beijing has even more reason to be worried. North Korea's unabashed refusal to abide by the norms of international behaviour is a thorn in its side. The recent nuclear and missile tests provide a solid pretext for the United States to deploy a high-altitude missile defence system in South Korea. Beijing has already voiced its opposition to this move, regarding it as a direct security threat.

While some laugh off North Korean leader Kim Jong-un’s threats to “annihilate” adversaries using nuclear-armed missiles, there is a nagging suspicion that there are some grounds to believe he has the capability of doing this. But dangerously toying with nuclear weapons does not amount only to empty blackmail: It is the recipe for an explosive cocktail of instability and conflict – a conflict in the close vicinity of China, which has maintained a privileged relationship with all the three Kims.

An editorial in the ‘Los Angeles Times’ speculates that China will use its influence to regulate the bellicose outbursts by the present Kim. China, the newspaper says, “provides a lifeline to him and his inner circle and props up the country's infrastructure. If it's serious about calming tensions on the Korean peninsula, it will use that considerable influence.”

The billion-renminbi question is whether Beijing has the strings attached to control Kim Jong-un, who has recently acquired a disturbing habit of killing off his most senior military leaders to a quell possible dissent among the single most influential community.

Is Moscow running out of patience?

Raising the stakes in the ongoing confrontation between the two Koreas is detrimental to Russia’s interests.

The last thing Moscow would like to see is an extended “arc of instability” stretching all the way up to the Korean peninsula. Secondly, Kim’s shenanigans deal a blow to Russia’s policy of a so-called “pivot to Asia,” focused largely on a gradual surge in the volume and quality of economic and trade interaction with its partners in eastern Asia.

Moscow has taken due notice of Seoul’s decision to toughen its own unilateral sanctions against Pyongyang, which include among other measures, a ban on vessels entering South Korean waters within six months of visiting the North. The ban effectively puts on hold the Rajin-Khasan project, which would deliver Russian coal to the South through the North Korean port city of Rajin.

Russia has nothing to gain but stands to lose much should the latent hostilities on the Korean peninsula persist. The deployment of more sophisticated weaponry by the U.S. government in response to North Korea’s irresponsible behaviour would keep South Korea hostage to the American military presence and limit its room for manoeuvre in goodwill diplomacy towards its northern brethren.

It would also set further barriers to resumption of the six-nation negotiations (between the two Koreas, the U.S., China, Japan, and Russia) that collapsed in 2008 amid rather gloomy prospects of positive engagement with the reclusive Pyongyang regime and its unpredictable leadership.

The high level of security concern over North Korea’s recent erratic behaviour has seen an emergency meeting called on March 11. At Russian Foreign Minister Sergei Lavrov’s invitation, his Chinese counterpart Wang Yi will visit Moscow to discuss conflict resolution in Syria and, at the top of the agenda, the North Korean quagmire.

In the best-case scenario, the current crisis evolving on the Korean peninsula would be slowly diffused. In the worst case, it would simmer and boil, heating up the whole region. When it comes to North Korea, Moscow and Beijing would be well-advised to bear in mind one of the chief tenets of Murphy’s Law: “Left to themselves, things tend to go from bad to worse.”