Pulling Russian troops from Syria ‘a gift to Erdogan’ 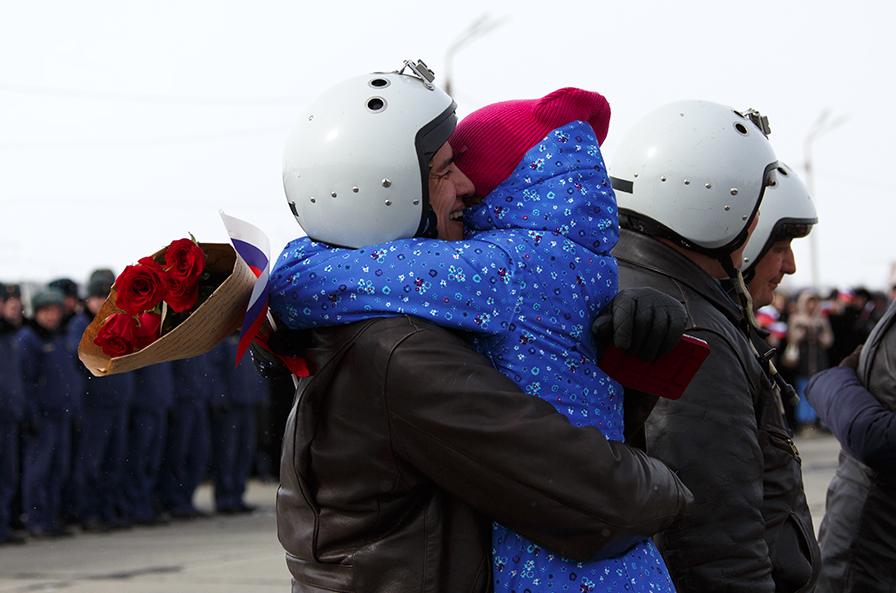 A Russian pilot receives a welcome on returning from Syria at an airbase near the Russian city of Voronezh, March 15, 2016.

mil.ru
Moscow’s decision to pull its forces out of Syria came as a surprise to almost everybody. The Russian media has reacted differently, with some interpreting it as a victory for Turkey’s President Recep Tayyip Erdogan, while others saw it more positively.

Turkey uses withdrawal of Russian forces for its gains

Withdrawing Russian forces from Syria is a gift to the Turkish President Recep Tayyip Erdogan, writes the news website Vzglyad.

"The Turkish president will certainly come forward and say that the withdrawal of Russian troops from Syria is his achievement and victory," said retired colonel Semyon Bagdasarov, director of Centre for Study of the Middle East and Central Asia.

The Syrian army and the Kurds may have problems in northwest Syria, he said. Who would now support them from the air during the fighting, as the Russian aerospace forces were?

"Passages from Turkey to Syria used by militants will operate now without any obstacles," said Bagdasarov. "The militants will strengthen their subversive actions against the Syrian army."

After withdrawal of Russian troops from Syria, Turkey no longer needs to send its own troops.

"They were afraid of the final closure of passages for militants between Azaz and Jarabulus," said Bagdasarov. "Now the Turks will be able to resume the 'export' of militants. The scope of work for our aviation will be less anyway. Consequently, it will make it easier for the militants."

“Although it was clear from the very beginning that Russia came to Syria not for good, that this is someone else's war and no one is going to win it for Assad or instead of Assad, the announcement about the withdrawal of troops was made very suddenly, without any preparation of public opinion for this step and without apparent reason,” writes business daily Kommersant. "Perhaps the move was the result of some secret agreements with the United States or with the Persian Gulf countries, which we will eventually learn about," writes the publication.

"Many of the objectives have been achieved in five and a half months. First of all, the threat to overthrow the regime of Bashar al-Assad was removed. A turning point was made in the course of the hostilities. Moscow had an opportunity to get out of the war with its head held high, presenting the Syrian campaign as its victory," the publication opined.

If the opposition and their foreign allies seize the initiative again, if they are able to capture Damascus and depose the Assad regime, this would be disastrous for Moscow’s reputation. Then, "Russian aerospace forces may have to return to the Khmeimim airbase and start a second Syrian campaign," writes Kommersant.

Jordan could mediate between Russia and Gulf states

Jordan could have known about the withdrawal of Russian troops from Syria a month and a half prior to the announcement of the decision by Moscow, writes the news website Gazeta.ru, citing the Defence News website.

An anonymous source in Amman said that Mashal Al Zaben, Chairman of the Joint Chiefs-of-Staff of the Jordanian Armed Forces, was informed of the plans to withdraw troops as early as January 28, when he came to Moscow and met with Defence Minister Sergei Shoigu.

The Defence News source said Syrian Defence Minister Fahd Jassem al-Freij also attended the Moscow talks, though no connection was officially reported between the visits of the Syrian and Jordanian military leaders to Moscow.

"Amman could act as a kind of intermediary in contacts between the authorities of Russia and Saudi Arabia which, as leader of the Persian Gulf coalition, sharply criticized the Russian operation in Syria," writes Gazeta.ru. "Perhaps, by informing the authorities of Jordan about the withdrawal plan Moscow wanted to send a signal to the Saudis that it was not going to fully challenge Riyadh in the struggle for zones of influence,” the website writes.

Russia and Saudi Arabia are divided on two key issues: Bashar al-Assad's regime and the blacklisting of a number of groups as terrorist. However, as Kremlin spokesman Dmitry Peskov stated at the end of February, solutions for Syria adopted by the United States and Russia were coordinated with the governments of Saudi Arabia and Qatar.

"Jordan manages to keep relatively calm relations with its most 'anti-Arab' neighbors; Israel and Iran," Ruslan Pukhov, director of the Moscow-based Centre for Analysis of Strategies and Technologies, told the publication.

According to Defence News, Ali Mamlouk, head of Syria's National Security Bureau, has repeatedly visited Amman over the past few months and "met with senior Jordanian officials."

According to Pukhov, Western and West Asian governments may have known about Russia’s plans from other sources as well.

"It is obvious that just as Russia prepared its entry into Syria at least five months in advance, the withdrawal of troops was not a spontaneous decision. It is obvious that it was correlated both with the negotiations in Geneva, and with the Americans," Pukhov said.