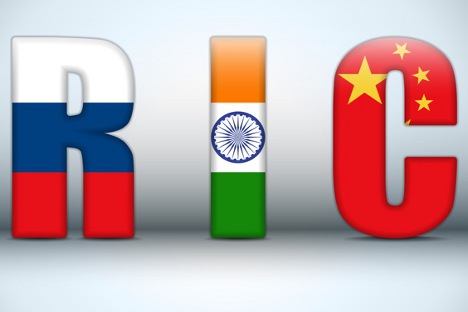 Since 2005, the countries organize separate meetings of foreign ministers, hosted by the RIC member countries in turn. Source: Shutterstock/Legion Media.

The RIC dialogue mechanism is an important element of multilateral net diplomacy, working in the interests of establishing of a fair world order, Russian Foreign Ministry says.

Russia pays special attention to development of cooperation on the international arena in the RIC format (Russia, India, China), the Russian Foreign Ministry said in a commentary shortly before the RIC 14th ministerial meeting due on April 18 in Moscow.

"Russia considers the RIC dialogue mechanism an important element of multilateral net diplomacy, working in the interests of establishing of a fair world order, formation of overwhelming, equal and indivisible security architecture in the Asia-Pacific region and its inclusive sustainable economic development," the statement reads.

"During the meeting, the foreign ministers will discuss in detail the current global and regional issues, tasks for improvement of the international legal bases for modern world order, collective counteraction in response to common challenges," the foreign ministry said. "They will pay special attention to the situations in the Middle East and North Africa, including in Syria, Iraq, Libya, the Middle East peace process, the situation in Afghanistan, as well as settlement of the domestic political crisis in Ukraine."

"The talks’ agenda is focused also on development of further efforts in fighting the international terrorism and the global drug threat," the document reads. "The foreign ministers will pay attention to coordination in multilateral unions, first of all on platforms of the UN, SCO, BRICS, East-Asian summits, and the Conference on Interaction and Confidence-Building Measures in Asia (CICA)."

The Russia-India-China "three" had a summit in July 2006 on the sidelines of the G8 meeting in St. Petersburg. Since 2005, the countries organize separate meetings of foreign ministers, hosted by the RIC member countries in turn. During these meetings, foreign ministers coordinate approaches on key issues on the international agenda and also specify certain directions of practical cooperation.