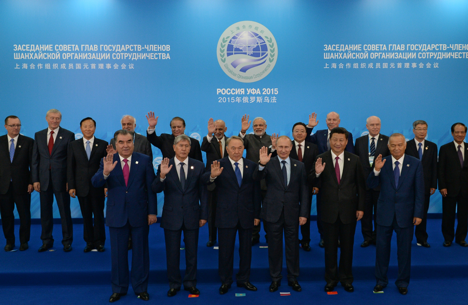 Over 15 years of its existence, SCO has become a universally recognized and respected multilateral organization.

sco-russia.ru
The "Shanghai Five" leaders deeply understand the requirements of the new era that center around the urgent need to effectively respond to the emerged global trends, Secretary General of the SCO Rashid Alimov said.

The format of the "Shanghai Five" meetings and especially the historic meeting of the leaders of China, Russia, Kazakhstan, Kyrgyzstan and Tajikistan in Shanghai on April 26, 1996 made a special contribution to maintaining peace and stability in the Asia-Pacific region, as well as in the future and development of the Eurasian space, Secretary General of the Shanghai Cooperation Organization (SCO) Rashid Alimov told TASS on Monday on the occasion of the 20th anniversary of the signing of the Agreement on Confidence-Building in the Military Field in the Border Area of the "Shanghai Five" countries.

"The Agreement signing did not just launch a new multilateral regional dialogue, but, in fact, also determined a new regional configuration that is based on progressive approaches to the challenges of international cooperation," the SCO Secretary General said. "In addition to the resulting practical steps to optimize the number of the personnel of the armed forces stationed along the border area, as well as ··armaments and military equipment, the sides demonstrated by this document their willingness to unite around a common security concept that is based on the principle of reciprocity and non-confrontation, prevalence of the common interests over individual ones. They renounced the use of military force as a means of settling international conflicts and proclaimed its use solely for the self-defense purposes."

"The choice of this approach by the "Shanghai Five" leaders has shown that they deeply understand the requirements of the new era that center around the urgent need to effectively respond to the emerged global trends, ensuring progressive development of the vast region", he said.

"Over 15 years of its existence, SCO has become a universally recognized and respected multilateral organization, one of the systemically important factors of the new multipolar world architecture, actively promoting security and stability in the region, as well as joint development of the SCO member states. SCO has turned into a powerful force in the vast Eurasian space, however, exclusively constructive in nature, focused on building new-type relationship," the SCO secretary general said.

The Shanghai Cooperation Organization is an international organization founded by the leaders of China, Russia, Kazakhstan, Tajikistan, Kyrgyzstan and Uzbekistan. In 2015, India and Pakistan, which have the status of observers, have started procedures for entering the Shanghai Cooperation Organization. Other SCO observer states include Afghanistan, Belarus, Iran and Mongolia. Azerbaijan, Armenia, Cambodia, Nepal, Turkey and Sri Lanka are partners for dialogue.