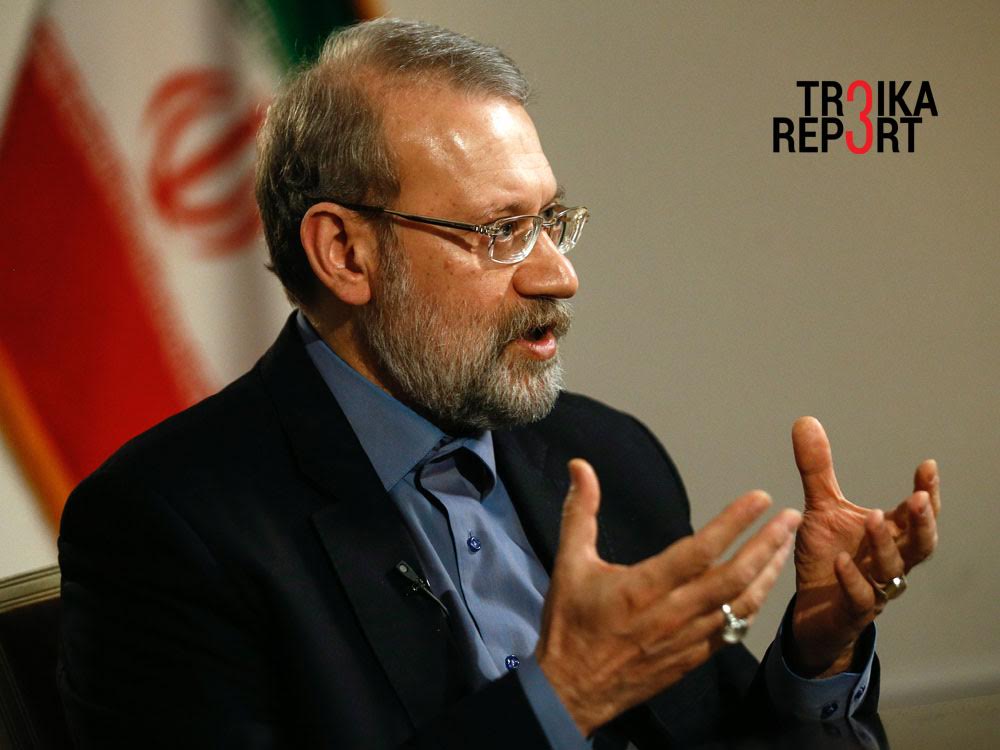 Ali Larijani, the speaker of the Majlis (Parliament) of Iran.

Alexander Shcherbak/TASS
Relations between Iran and Russia have always been prone to suspicion, speculation and prejudice. Now that the two nations claim a vibrant on-going political dialogue, does it mean a genuine rapprochement between them, with elements of “friendly relations”, as Russia’s presidential press secretary called it? Moscow-based analysts are reserved but reasonably hopeful.

The amount of upbeat rhetoric by politicians on the state of play and prospects of Iranian-Russian interoperability is sometimes reminiscent of spells of rain. The sheer volume of goodwill condensed in these optimistic prophecies mesmerizes.

Iran’s ambassador to Russia, Mehdi Sanaei, declared last November that a “new chapter” in bilateral relations has been opened. The conclusion was backed by reference to the diplomatic support rendered by Moscow to Tehran in helping to strike a balanced nuclear deal with the West, the $5 billion credit line to boost trade, and operational coordination of military actions in Syria.

Dmitry Peskov, the presidential press secretary, made a statement in mid-March that relations have surged to a “new level,” and said Moscow has “been persistently developing friendly relations with Iran.”

Iranian Parliamentary Speaker Ali Larijani, who wound up his visit to Moscow on April 20, emphasized the benefits and importance of the current interaction, saying, “last year about ten of our ministers came to Russia and ten Russian ministers visited Iran. Our countries are cooperating in the regulation of crises.”

In the wake of Larijani’s visit, Iranian Defence Minister Hossein Dehghan arrived to Moscow to take part in the International Security Conference, supporting the assumption that the brass hats of both countries keep all channels open, and it works.

Nevertheless, the compatibility of long-term strategies of both countries is being put to test on a daily basis. Several recent developments are bringing the two countries on either a collision course (the worst scenario) or simply slowing down or even freezing the current pace of cooperation (the best scenario).

Iran’s uncooperative stance on the idea of freezing oil production at mid-January levels, to rebalance the supply/demand equation and drive up prices has been one of the key factors that derailed the Doha pre-sealed agreement.

The preliminary deal reached with a lot of effort by Russia, Saudi Arabia, Qatar, and Venezuela was supposed to be signed in Doha, but Iran’s opposition led Saudi Arabia to torpedo the move, which might have been the first step to set up a more effective alliance to regulate the global oil market, sort of an OPEC-2.

Iranian Oil Minister Bijan Zanganeh was intransigent on a Doha accord and fully committed to the proclaimed goal to raise domestic oil production, and boost its hard currency revenues.

Viewed in perspective, the imminent return of Iran as a major exporter of hydrocarbons, be it oil or pipeline gas or LNG, would increase overall supply, put downward pressure on prices, and, in theory, enhance competition by challenging Russia, for instance, in its traditional European oil markets.

Cooperation in the energy sector and, consequently, economic ties between Russia and Iran might slip on this oily banana peel.

In March, it also came to pass that “Iran is impeding implementation of contracts with Russia on construction of a thermal power plant in Bandar Abbas and railway electrification by setting new price conditions”, Russian news agency TASS reported.

Nothing really big and similar to Bushehr NPP project is in the pipeline for the moment. Also, there does not appear to be any willingness on the part of Tehran to reward Moscow for mediation with the West on the nuclear dossier and for propping up Assad’s regime in Syria by rolling out the red carpet of preferential treatment in trade and economic cooperation.

Was it mere wishful thinking? Do misplaced expectations cool off the enthusiasm and perspectives of a surge in economic interaction?

“Why would Iran give preferences to any foreign investor or business entity now that there is a formidable queue of those who would like to enter the lucrative domestic market of an 80-million nation? Basically, there are windows of opportunities to be capitalized on; these are the special economic zones offering concessions and comfortable terms and conditions for newcomers.”

Would Russian business be welcomed as a “newcomer”?

“By all means. The Iranian government is eager to engage with Russia on many tracks, including business endeavours. For the moment, the stumbling block is the absence of a working parliament, since the election process is not over yet, and the Majlis is not at full capacity. Once it is in place, we might expect proper legislation to be passed stipulating preferential regimes, including tax holidays for foreign investors, etc.”

There have been rumours that Tehran does not exclude joining the Russia-led Customs Union. Is this a fact?

“It is true. A high-level Iranian official even predicted that this process might take one or two years, although it’s an improbably short timeline.”

Moscow duly consulted Tehran before launching airstrikes against Islamic State (IS) militants in Syria, after being formally invited by the legitimate regime in Damascus. The Iranian military were briefed on the launching of Calibre sea-launched missiles from Russian battleships in the Caspian Sea. Routine coordination of military activities has become standard procedure. Surprisingly for many, it worked well.

This may look good, especially in reports, but it hides the divergence of geopolitical objectives pursued by Russia and Iran on Syria. Moscow wants to prove its point: foreign interventions in conflict zones and in convulsing states torn apart by civil war, carried out without mandate of the UN Security Council and without approval of legitimate governments, are unacceptable. Russia wants to stress that this is already a multi-polar world, and the interests of all nations, big or small, have to be respected.

In this context, Moscow does not really care whether Bashar al-Assad remains President of Syria or is replaced by someone who would honour the principles of secularism, fight unrepentant jihadists, curtail the spread of radical Islam, and accept the presence of Russian naval and air force bases on its territory.

Iran, on the contrary, has a stake in preserving the Alawite (Shiite) clan in power in Syria. The collapse of Assad’s regime might lead to the emergence of a Sunni-led government, sponsored and supported by Iran archrivals in the region, Saudi Arabia and Gulf monarchies.

It adds ambivalence to the alliance of convenience forged by Iran and Russia, since the latter is not keen to get involved in the formation of any Shiite Crescent. At the stage of finding a formula for intra-Syrian reconciliation, the disagreements over where is the “final destination” would almost certainly surface.

Past Haunting the Present

It is hard to dismiss the premonition that old skeletons from the closet would one day chase the champions of rapprochement between Iran and Russia. The burden of a turbulent past is not easy to lay to rest in peace, explained Lana Ravandi-Fadei, senior research fellow at the Institute of Oriental Studies, Russian Academy of Sciences, while speaking to RIR;

“I have been regularly lecturing in Iran, and have concluded that it is hard to cultivate warm feelings for Russia. Iranians have a strong sense of history. Whenever you say something good about Russia, they would retort with one word: “Turkmenchay!”

(Editor’s note: The 1813 Gulistan Treaty and the 1828 Treaty of Turkmenchay sealed the expansion of Russia by conquering all Caucasian territories from Iran, comprising modern-day Dagestan, eastern Georgia, Azerbaijan, and Armenia. Persia ceded to Russia control of several areas in the South Caucasus: the Erevan Khanate, the Nakhchivan Khanate, and the remainder of the Talysh Khanate. The government of Iran was obliged not to prevent Armenians from moving to the Armenian region created in these khanates, which contributed to the unification of the Armenian people within the Russian Empire. Russia obtained the full right to navigate all of the Caspian Sea. Iran had to pay a compensation of 20 million rubles in silver, later decreased to 10 million rubles).

Probably, the Soviet troops deployed in northern regions of Iran during World War II, to prevent the Nazi invasion, were also not welcome.

“This is regarded as occupation. No less irritating was the support for the Tudeh, Iran’s Communist Party, during the times of the Soviet Union, and military assistance given by Moscow to Bagdad during the 1980-1988 war with Iran.”

The fundamental differences are evident, and give ground for doomsday predictions. “Despite their numerous anti-Western interests, Russia and Iran are not allies”, Mark N. Katz, professor of government and politics at George Mason University, said.

The American professor appears to underestimate the voluntary decision by Iran to join the Shanghai Cooperation Organization (SCO), a Eurasian political, military and economic organization with China and Russia as the architects and locomotives.

But past grievances die hard. The “downturned” periods in the black-and-white history of bilateral relations were reviewed by Samuel Ramani, M Phil student in Russian and East European studies at St. Antony’s College, Oxford, specializing in post-1991 Russian foreign policy, who asserts that, because of past hostilities “Russian elites saw Iran as untrustworthy; Iranian elites saw Russia as imperial and arrogant.”

Do the demons of the past still haunt the present? Is it irrevocable?

Ravandi-Fadei said: “I used to think so too, until my last two visits to Iran this year. The change of mood is truly amazing. I have never before come across people saying that “Russians, well done!” and “Putin is a hero”. The Syrian campaign must have broken the camel’s back, nothing else.”

According to Lana Ravandi-Fadei, there never was a strong anti-Russian sentiment akin to hatred. The dominant feeling can be described as “distrust”, with a faint chance it now starts to fade.