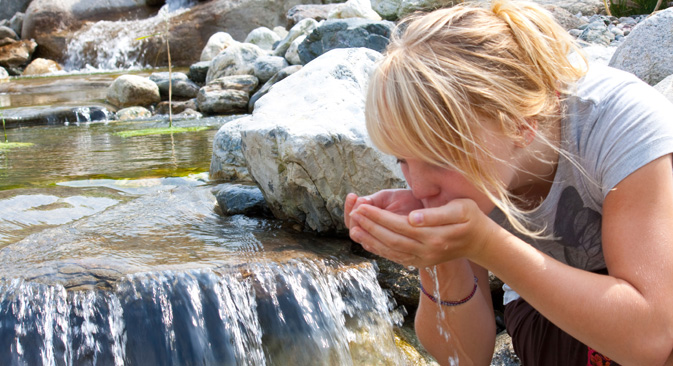 Moscow will host a BRICS conference on October 13-14, at which participants will discuss issues of sustainable use of water resources among member states. They will also deliberate on international aspects of water usage.

Access to fresh water is one of the most important global challenges today, primarily due to the continuous growth of consumption, low level of replenishment of water resources, as well as external factors, such as climate change, leading to a permanent reduction in the volume of water resources and availability. According to experts, one of the topics to be raised at a BRICS conference on judicious usage of water resources due in Moscow on October 13-14, 2016, could be monitoring the efficiency of water usage.

Water resources are necessary to maintain human life and other living organisms, and for the production processes in most sectors of the economy. Solving issues related to water resources requires an integrated approach to exploitation of those resources, as well as to development of water management infrastructure and water re-use technologies. Many issues about exploitation and protection of water resources have an international character, and are relevant not only for Russia, but also for its partner countries in BRICS - Brazil, India, China and South Africa - noted the Russian Ministry of Education and Science, which will be one of the moderators of this conference.

Alexander Tkachev, Russian Minister of Agriculture and Chinese Agriculture Minister Han Changfu spoke about the interest of BRICS countries in this conference in Moscow at a meeting they held recently. During their meeting, they discussed the possibilities of supplying Russian fresh water to arid regions of China. Water, as much as a volume of 70 million cubic metres, could be carried from Russia through Kazakhstan to China.

“We are ready to propose developing a project for the transfer of fresh water from the Altai Krai, through Kazakhstan, to the Xinjiang Uygur Autonomous Region of China. In the near future, we will be holding consultation meetings with colleagues from Kazakhstan on this issue,” Tkachev said after the meeting.

President Vladimir Putin chaired the meeting of BRICS leaders at Ufa last July, where the summiteers signed the Ufa Declaration. This includes their approach on issues of multilateral cooperation in the field of politics and economy. An Economic Partnership Strategy for BRICS Countries till 2020 was also adopted, aimed at expanding multilateral business cooperation, and increasing the competitiveness of BRICS countries in the global economy.

Last October, Moscow hosted a BRICS ministerial meeting on science, technology and innovation, where ministers signed the Moscow Declaration, reflecting the main directions of cooperation for BRICS in the medium term.

A special place in this declaration was given to establishment of a joint research and innovation platform, to ensure a thorough and coordinated approach, among research communities of BRICS countries, in five approved thematic areas of scientific and technological cooperation. Russia – water resources and control over water pollution; Brazil – prevention and mitigation of adverse effects of natural disasters; India – geospatial technologies and their application; China – new and renewable sources of energy, and efficiency; South Africa – astronomy. They also decided to establish networking cooperation in the following areas: biomedicine, health and neuroscience; information technology software for high performance computers; study of the oceans and polar research; coordination of materials on nanotechnology and photonics.

“Discussion of the water crisis in the world is long overdue. It seems that the planet has great water resources, but these are rather unevenly distributed. Nature has its own laws that we do not fully understand. We cannot reliably predict on how much water there will be in certain places in the coming year,” said Vladimir Kirillov, head of the Aquatic Ecology Laboratory of the Institute of Water and Ecological Problems at the Siberian Branch of the Russian Academy of Sciences.

“There are problems not only related to the quantity of water, but also to its quality. Here everything depends on humans. These two items require very careful monitoring. The existing monitoring system does not meet modern needs. I believe that this will become one of the issues that will be discussed by the BRICS countries. This will be an exchange of experience in water management practices worldwide.”