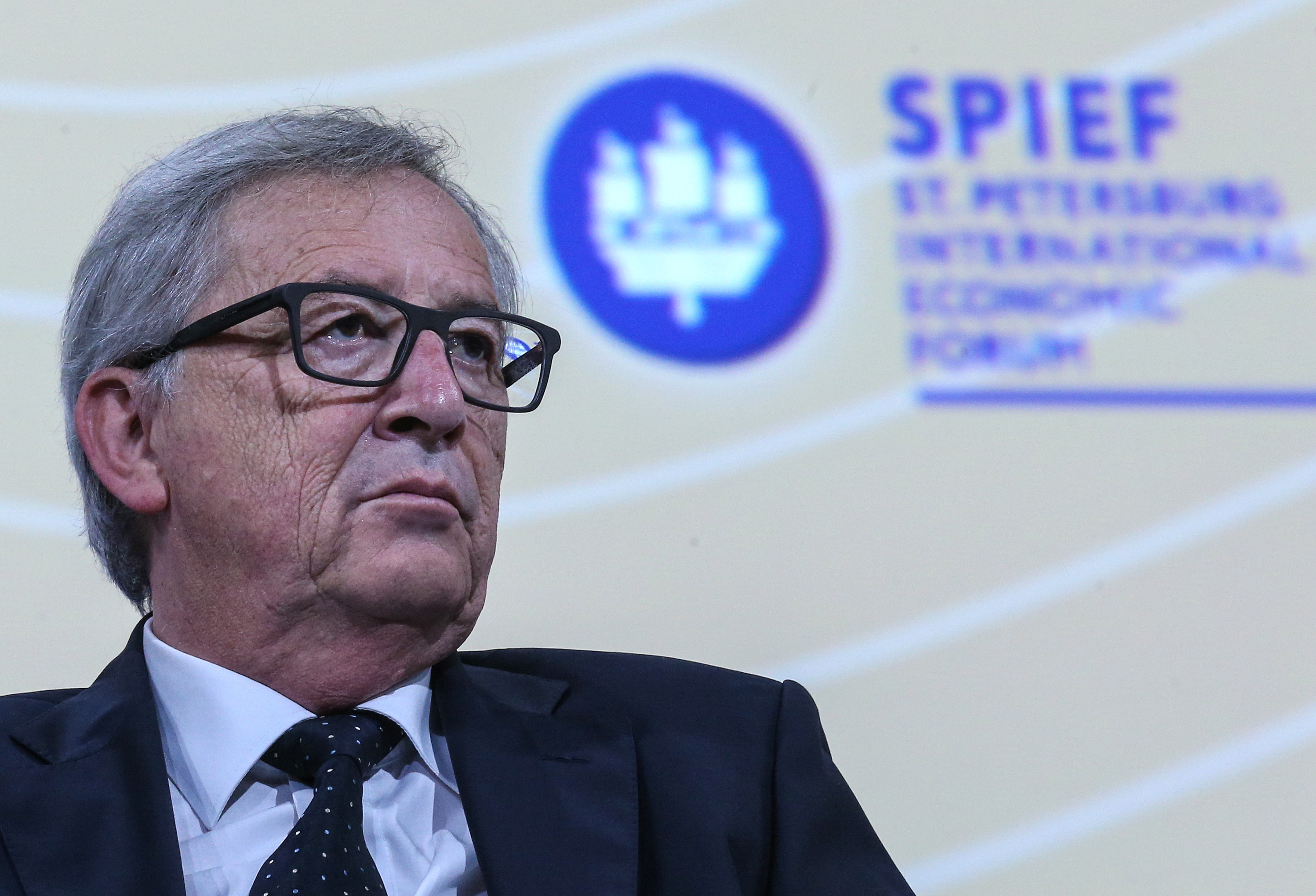 Valery Sharifulin/TASS
The dialogue should start with discussing the Minsk agreements, and ensuring the norms and rules of international law, the European Commission head Jean-Claude Juncker said at the St. Petersburg Economic Forum.

Russia and the EU should continue their dialogue despite sanctions, the European Commission head Jean-Claude Juncker has said at the St. Petersburg Economic Forum. Russian Foreign Minister Sergey Lavrov responded by saying that Russia is in favor of an equal, mutually beneficial, but not selective dialogue.

"We can have no illusions about the problems weighing on our relationship today. They exist. It would be pointless, even dangerous, to ignore them. We must tackle them urgently," Juncker added."I have strong preference for pipelines that unite, rather than pipelines that divide," he added, as quoted by Reuters.

The dialogue should start with discussing the Minsk agreements, and ensuring the norms and rules of international law, Juncker said.

"Russia's actions have shaken the principles of European security. Sovereignty, sovereign equality, the non-use of force, and territorial integrity matter. They cannot be ignored," he added.

As for Ukraine, it should make its own decisions regarding relations with all states, including with Russia and the EU, or both, and the choice should be respected, Juncker said, adding that a stable Ukraine would do the Russian economy good, too.

Juncker also defended his decision to arrive in Russia for the summit, saying it was just common sense to continue the dialogue with Moscow despite any tensions, and that he knew some didn't support his step to come to St.Petersburg. He said he was expecting "frank" negotiations with President Vladimir Putin on many subjects.

Russia has never courted confrontation with the West and is always open to dialogue, Russian Foreign Minister Sergey Lavrov has said during the St. Petersburg Economic Forum.

“The current crisis should help us, as well as the EU, understand how to proceed. We will neither take offense nor go into isolation,” Lavrov added.

“We have carried out an inventory of our relations with the EU, drafted it on paper, and have an extensive document. We’ll give it to our colleagues and offer to conduct an inventory together,” Lavrov said.

The foreign minister also said that the EU is a most important economic partner for Moscow, and expressed his certitude that “the development of various ties in economics, politics, culture, security directly aligns with the interests of both Russia and European countries.”

The EU is Russia's main trading partner (44.8 percent of Russia's foreign trade in 2015). Russia is the fourth largest trade partner of the bloc after the US, China and Switzerland, plus the biggest natural gas supplier to the EU and one of its biggest oil suppliers.

However, due to recent tensions, trade between Moscow and Brussels sharply dropped from $417.7 billion in 2013 to $235.7 billion last year.

The St. Petersburg International Economic Forum is held on June 16-18, focusing on the theme ‘Capitalizing on the New Global Economic Reality’.