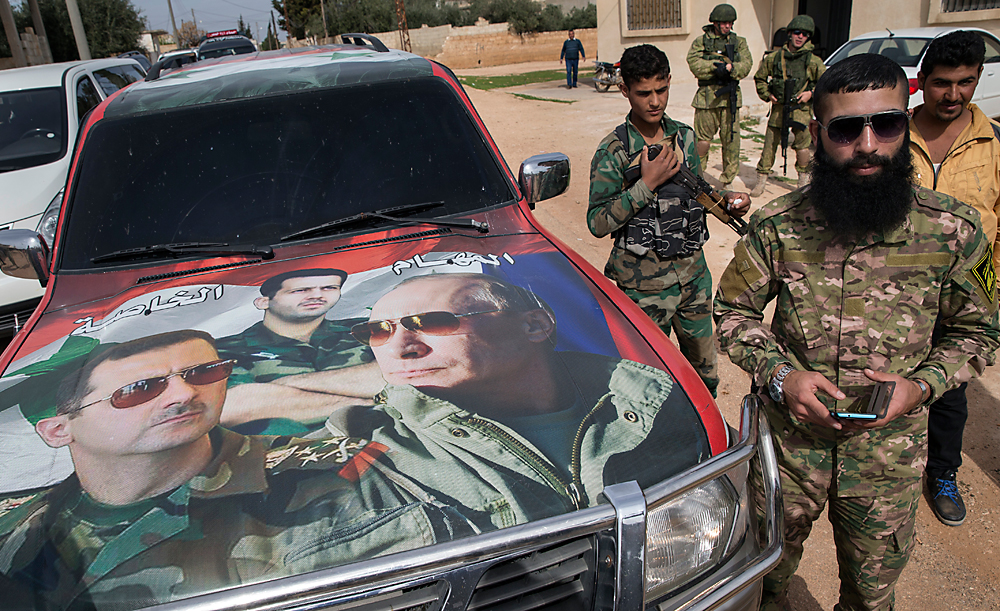 AP
Russia has been seen as giving unwavering support to Syrian president Bashar al-Assad ever since the conflict began in Syria. Moscow and Damascus however, differ on key issues. Russia advocates a political resolution, but Assad sees war as the means to solve the conflict.

Damascus relies on Russian military assistance. With the support of the Russian Air Force, Syrian government troops; which were retreating until September 2015; snatched the initiative in the civil war, regained control over some previously lost districts, including Palmyra, and are now mounting an offensive against Raqqa, the self-styled ISIS “capital.” ISIS is banned in Russia. These gains would not have been possible without Russia’s involvement. There are, however, serious disagreements between the Kremlin and Damascus.

In the Syrian conflict, the goals of Russia and Assad only partially coincide, said Vladimir Akhmedov, senior research associate at the Russian Academy of Sciences’ Institute of Oriental Studies.

“Russia’s interest consists in preserving a secular regime in Syria, which would continue cooperating with Moscow,” he says.

As far as Moscow is concerned, it is not essential whether Assad remains in power or not, but for him the issue is crucial, Akhmedov said. Representatives of the Syrian government refuse to discuss the president’s resignation as a prerequisite for the start of a “transition period” envisaged in the Geneva agreements.

Assad is for war

Akhmedov believes the Syrian president is only paying lip service to a political settlement. “Assad is a man of war, he intends to fight to the end," he said. "He is prepared to hold talks only from a position of strength, so that he could impose his terms on the opposition. To that end, he needs military victories. He needs to regain control over large chunks of territory.”

Arabic scholar Grigory Kosach, a professor at the Russian University of Humanities, shares this opinion.

“Unlike Russia, Assad has never viewed even the moderate section of the Syrian opposition as possible negotiating partners. He has always described them as terrorists operating on orders from abroad,” said Kosach.

For Russia, continuation of the war is fraught with the risk of bigger losses.

“We cannot allow an escalation and the involvement of a large number of Russian servicemen in hostilities. Russia is seeking to move to a political settlement,” said Akhmedov.

Attitude to the Kurds

Moscow and Damascus also differ on the Kurdish issue. When Syrian Kurds declared the establishment of an autonomous Federation of Northern Syria in March 2016, Assad opposed the move despite the fact that the Kurds did not demand independence but just called for a federation.

“Damascus is categorically opposed to any ideas of federalization, fearing that it would result in a breakup of the country,” said Kosach.

In the standoff between the government and the Kurds, Russia has opted to remain neutral. Russian presidential press secretary Dmitry Peskov said, “The internal structure of the Syrian state is a matter for Syrians to decide.”

Kosach points out that Moscow is exercising caution. Syrian Kurds are an effective ally in the fight against ISIS, but Russia has no intention of ruining relations with Damascus on their account. Nevertheless, a representative mission of Syrian Kurdistan opened in Moscow in February 2016 (at an unofficial level, as a non-governmental organization).

Experts are convinced that despite the existing disagreements between Assad and Russia, the Kremlin will not give up its support for the Syrian president.

“So far, Russia does not see anyone in Syria who could replace Assad [from the point of view of protecting Russia’s interests]. That is why it has to support all his initiatives,” said Kosach.

According to Akhmedov, if Russia starts putting too much pressure on Assad, he may easily reject cooperation with Russia and move completely under Iran’s influence.

Unlike Russia, Iran does not consider the option of regime change in Syria, even theoretically, and unequivocally supports Assad. This explains, Akhmedov said, Moscow's reluctance to criticize the Syrian regime and demonstrate a unity of approach even where there are some disagreements.